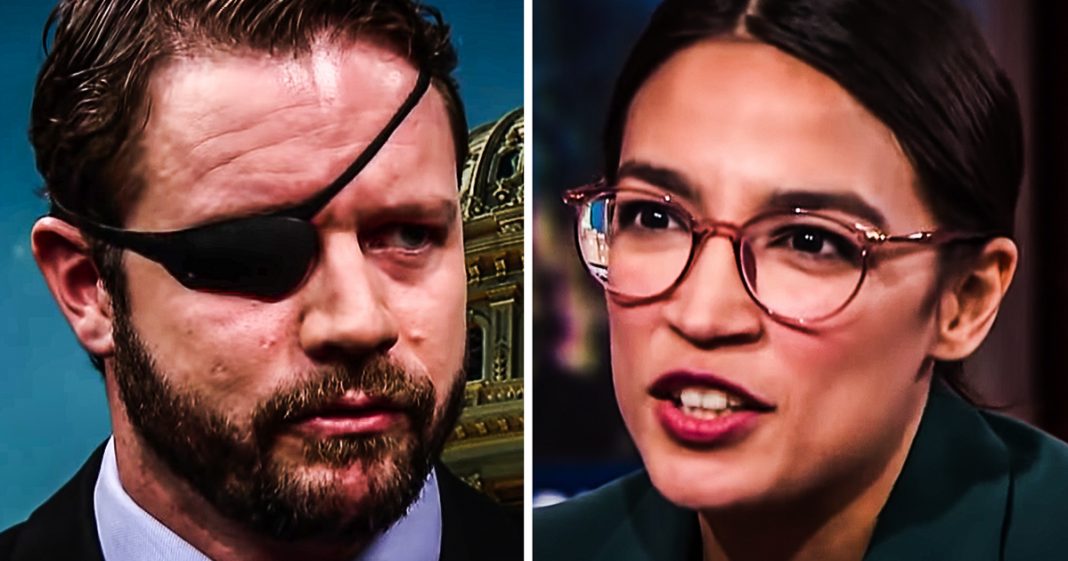 Republican Representative Dan Crenshaw does not like background checks, and he wants the entire country to know it. But he offered up an odd reason: He wants to be able to lend guns to his friends, but background checks wouldn’t allow him to do this. Rep. Alexandria Ocasio-Cortez correctly pointed out how nuts his statement is, and then he REALLY flew off the handle after that. Ring of Fire’s Farron Cousins explains what happened.

*This transcript was generated by a third-party transcription software company, so please excuse any typos.
Republican representative Dan Crenshaw doesn’t like universal background checks. He does not want the government making sure the dangerous people don’t get their hands on firearms. And he made an incredibly stupid comment on Twitter on Wednesday that immediately got attacked by pretty much everybody to the left of Crenshaw. And by the way, including some of his supporters who admitted, wow, this is a really dumb thing to say and here it is. Situations like this story or why we protect the second amendment. And for reference, he was talking about a story of a woman. She went for it. She went out by herself. Uh, five men tried to attack her, but she had a gun. So they didn’t attack her. And so he said again, situations like this are why we protect the second amendment. Side note with universal background checks, I wouldn’t be able to let my friends borrow my handgun when they travel alone like this.
We would make felons out of people just for defending themselves. So Dan Crenshaw is pissed because if we had universal background checks, comprehensive universal background checks, he couldn’t give his gun to his buddy and cases buddy needed to murder somebody on their way to the store. Is that what you’re really complaining about, Dan Crenshaw? Because that’s what it seemed to everyone on Twitter. You were complaining about, AOC had a brilliant response to this on Twitter. She said, “you are a member of Congress. Why are you lending guns to people unsupervised who can’t pass a basic background check the people you’re giving a gun to have likely abused their spouse or have a violent criminal record and you may not know it. Why on Earth would you do that?” And again, that’s pretty much the response all of us had is who the hell are you hanging out with that can’t pass a background check yet apparently needs a gun bad enough to where you have to lend them yours.
You’re the irresponsible one in this situation. Dan Crenshaw, you know all the goodwill you had built up towards you when a SNLs Pete Davidson mocked you and then was forced to issue that apology. Yeah. All that goodwill is gone because you’ve proven to be quite the piece of crap since you’ve been elected. I mean you’re, you’re really, really bad and speaking of really, really bad, here’s your response to AOC. His response, “just so I’m clear, you think my friends are domestic abusers slash. Criminals. Seriously, that’s your argument that they can’t pass a background check wrong. People lend guns to friends, especially if they don’t own a gun for self defense and hunting purposes. This is America outside NYC.” Dude. If your friends need a gun, why don’t they just go buy gun? I mean, did did that thought honest to God, never cross your little mind Dan.
If they need a gun, if they’re a hunter, shouldn’t they buy their own equipment? I mean, if this is a sport that you engage in on a regular enough basis, shouldn’t you have the basic equipment to do it? If you are so fearful for your life that you feel the need to carry around a hand gun with you, wouldn’t you buy your own instead of every morning knocking on your neighbor’s door like, hey, I’m up. I need your gun for the day, Dan, your argument is stupid. That is a very stupid, unintelligent argument that you have made and you got put in your place, not just by AOC, but by quite literally everyone else on Twitter who disagreed with you, which was most of them because we understand that if somebody can’t pass a background check, there’s a reason we don’t want them to have a gun. But you with your big dumb self think, hey, can’t pass background check. Come on over to Dan Crenshaw’s gun rental and I’ll let you have mine.