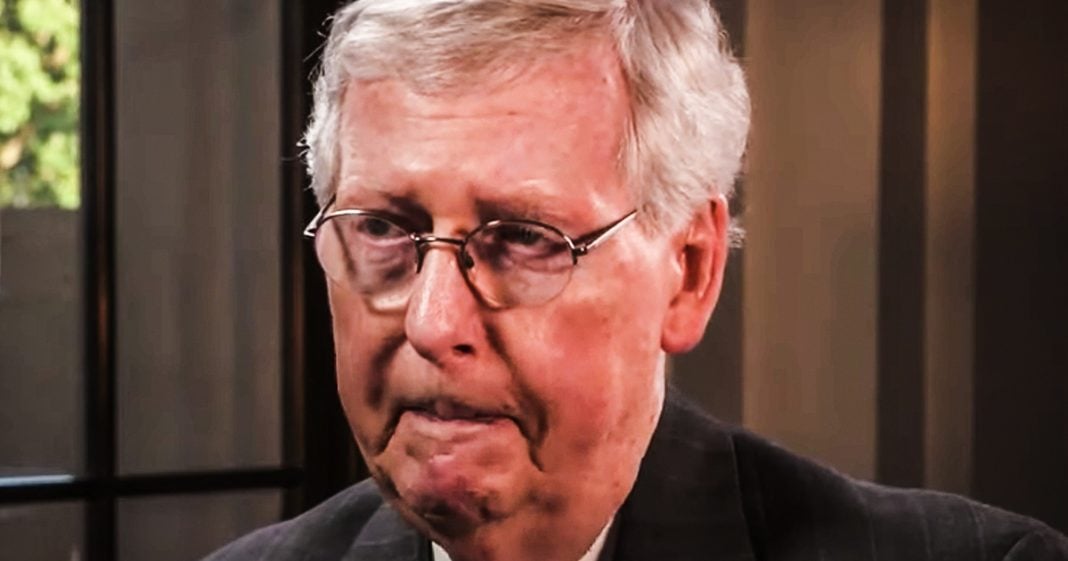 Republican Senate majority leader Mitch McConnell is not happy about being called “Moscow Mitch” by protestors, angry constituents, and the entire social media world, and he claims that this nickname is “over the top.” While there are certainly some issues with this name (it undermines the fact that he’s always been a horrible person), anything that makes Mitch unhappy is a good thing. Ring of Fire’s Farron Cousins discusses this.

*This transcript was generated by a third-party transcription software company, so please excuse any typos.
For a little over a month now, people have been referring to Senate Republican majority leader Mitch McConnell as Moscow Mitch. We’ve all seen the hashtag trending on Twitter. We’ve seen it on Facebook, we’ve seen it everywhere. Moscow Mitch is the new name. Hell, even Nancy Polosi has referred to him as Moscow, Mitch. And you know, for a while it seemed like maybe Mitch McConnell wasn’t too bothered about this. But during an interview earlier this week with the Hugh Hewitt McConnell actually did express the fact that that he’s very upset by this. He doesn’t like it. It’s making him very uncomfortable. Uh, this is what he had to say. He said a, it’s an effort to smear me. You know, I can laugh about things like the grim reaper, but calling me Moscow Mitch is over the top. And the biggest reason people are calling him Moscow Mitch, is because Mitch McConnell refuses to do anything about election security here in the United States, which obviously means Russia can come in and hack our elections and do whatever the hell they want.
But I also have a bit of an issue with calling him Moscow Mitch and no, it’s not because I’ve appeared on RT. Here it is. We are hyper focused right now on Russian election interference and honestly we have a good reason to be. We know that they interfered with the 2016 election, or at least they tried. They did get into our systems. We know that that is indisputable. So yes, Russia is a problem. So as literally every other country out there folks, but our hyper focus on Russia making this all about Russia means that we ignore all of these other threats because guess what? Somebody’s hacking into our election system doesn’t have to come from overseas. It doesn’t have to come from Moscow. As we have repeatedly said, as studies have repeatedly shown, it can come from the dude down the street from you.
It can come from the guy in the next apartment. It could come from your roommate. It can come from anywhere because our election systems are so fragile and insecure and yes, Mitch McConnell is the Guy Blocking this and I am in favor obviously, of making Mitch McConnell uncomfortable. He is a horrible human being and he does not deserve happiness. So I’m okay with the nickname in that regard, but I don’t like the fact that it does hyper-focus us only on Russia while ignoring all of the other threats out there. It also kind of implies that, oh, prior to this, Mitch McConnell wasn’t such a bad person. No, this guy’s always been horrible. I mean, Merrick Garland ring a bell. Everybody. We didn’t have a cutesy nickname for him back then. We should have, but we didn’t. So I guess in, you know, in conclusion, I’m not a fan of the nickname, but at the same time I’m also okay with it as long as we understand as a public that it ain’t just Russia out there. They were the ones who, yeah, they played a huge role in 2016 and that is undeniable. But we also have to understand that at this point, because of Mitch McConnell’s obstruction on election security bills, we’ve got so many other threats out there today, and not all of them are coming from overseas. We have to address all of these threats, and I think the biggest and best way to do that is to simply vote out in Moscow Mitch in 2020.