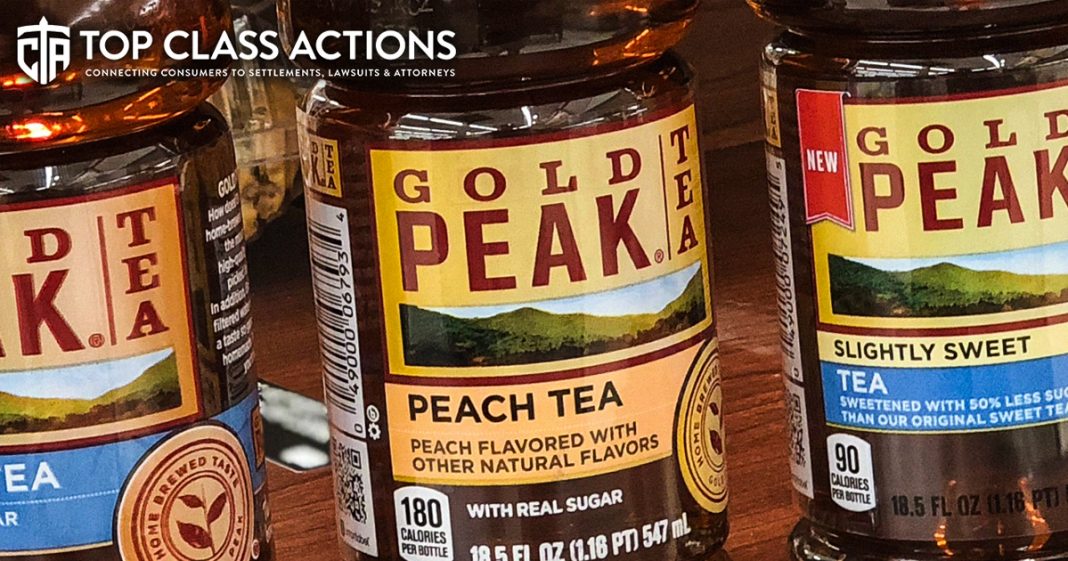 A lawsuit claims that the concave design of Gold Peak Tea 18 fluid ounce bottles is misleading to consumers, making the bottles appear to hold more tea than they actually do. Plaintiff David G. says The Coca-Cola Company intentionally tricks customers about the amount of tea in Gold Peak Tea bottles in the interest of maximizing its own profits. Ring of Fire’s Farron Cousins discusses this with Scott Hardy from Top Class Actions.

Farron Cousins:                  One of the things we have talked about many times on this show with Scott Hardy from Top Class Actions is the issue of slack fill, you know, a kind of deceptive packaging where when you look at a product, you think it’s actually filled, that what you see is what you get. But as we found out too many times, that is typically not actually the case. So Scott, you’re with me right now. We’ve got an issue, kind of a slack fill issue, I guess you’d call it, with these Gold Peak tea bottles. Now, a class action lawsuit has been filed. Tell us what’s happening with the Gold Peak Tea class action.

So you think you’re getting more, and on this one, this is the first one that I’ve seen is called a slack fill class action for a beverage, where you have this good size bottle, but then you have that indentation which takes out some of the volume. So you’re just not getting what you think you are.

Farron Cousins:                  Well, and one of the things that immediately jumped into my mind when I read this story was Gatorade. Gatorade bottles, which also I believe made by the Coca-Cola company. Same group that makes the Gold Peak Tea. They’re also very concave on the bottom, so it goes all the way down on the sides. But at the bottom you get this big ole, you know, bubble almost. So, it seems like Coca-Cola kind of makes a habit of this, you know, a lot of their non coke or sprite bottles, tend to follow this same kind of design where you got the big bubble in the middle but she can’t see it cause the side goes all the way down. It’s, it almost does feel like it’s intentional at this point, doesn’t it?

Scott Hardy:                          Right, you know, I thought that that was actually functional when I get those Gatorade bottles. I didn’t, it didn’t even occur to me as a consumer that they could be using this just to kind of misrepresent how much you’re getting. But David who, who actually represented himself in filing this lawsuit, he’s filed more than a hundred different class actions against different manufacturers. Almost all of them being slack fill. So David is responsible for a lot of different companies changing how they’re actually packaging their products because he catches it.

He files the class action, the businesses go, oops. And they actually change how they are packaging their products, thanks to David. So it’s interesting to see how this class action will go through because obviously he knows what he’s doing since he’s filed so many and made a lot of positive changes for those consumers who are buying these products.

Farron Cousins:                  And, you know, that’s the most important thing too. That that, that’s, that’s the goal. It’s not just, oh, let’s get a lot of money for people. No, it’s, let’s make them start doing the right thing so that we don’t have to do this. I mean, ultimately when you think about it, the goal of lawyers is to essentially put themselves out of business because they’re the ones who are out there fighting to make companies do the right thing. And when companies finally start doing the right things, okay, well then there’s no more need for lawyers. Their, their goal is to drive themselves to extinction, but because corporations can’t play by the rules, that extinction doesn’t look like it’s ever really going to happen. Does it?

Scott Hardy:                          No. That’s the thing is that we keep saying, wow, they’re never gonna do this again. And they say, well, we won’t do that. But now we figured out this new way to intentionally to mislead people and make you think you’re getting more than you actually are. So yeah, I mean you’re going to have, constantly have these companies that are really working for their shareholders rather than their end buyers, their end consumers who are buying their products to increase those profits. And that’s why you’re still going to have class actions get filed because these folks have figured out a new way to shave off a nickel for every dollar that they sell and that can hurt people in the end.

Farron Cousins:                  You know, not to mention the fact that I think this is worth pointing out too, it takes more plastic to make that little bubble than to make a flat line. So if you think about it, they would probably save a little bit of money, maybe a couple of cents per bottle if they just made it flat. I mean, to me that sounds like a win-win for everybody involved, but maybe that’s something corporations haven’t thought of yet. In case they do watch this and say, wait a minute, this guy’s right, I will take a 10% cut of all of the profits that you have saved.

But seriously though, for more information about this particular issue, follow the link in the description of this video and head on over to Top Class Actions and make sure that you sign up for their weekly newsletter. It is absolutely one of the best resources out there for consumers. Scott Hardy with Top Class Actions. Always a pleasure talking to you.