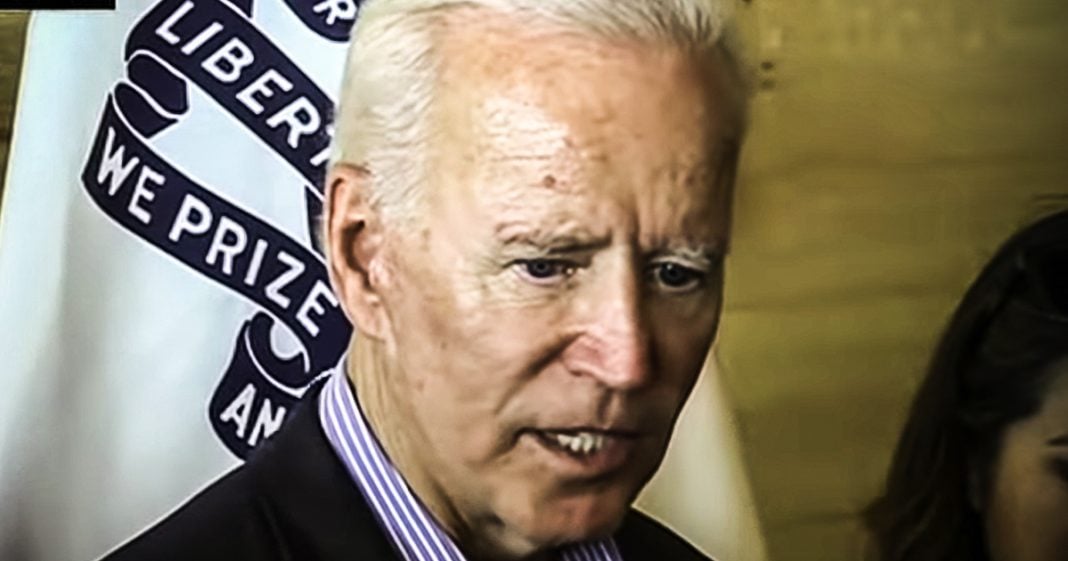 Joe Biden pledged to not take any money from lobbyists during his primary campaign, but he has repeatedly broken that pledge. The former Vice President has pulled in hundreds of thousands of dollars from lobbyists, showing that his word means absolutely nothing. Biden needs to get out of the race because he has no answers to the problems that Americans want fixed. Ring of Fire’s Farron Cousins discusses this.

*This transcript was generated by a third-party transcription software company, so please excuse any typos.
Joe Biden, much like a lot of the other Democratic candidates, when he entered the race said, I will not take any money from lobbyists. He pledged that to the American public. I will not take money from lobbyists. And then there should have been a little Astros after that statement because, man, I will not take money from a, you know, federally registered lobbyists because literally the same day he announced his campaign, he went to a fundraiser hosted by lobbyists. And in the months since then, he’s also received roughly $200,000 from people who worked for major lobbying firms. But don’t worry folks, because most of those folks weren’t federally registered lobbyists. You know, they’re, they’re just state lobbyists. There’s still a part of the influence machine that’s corrupting our political system, but they weren’t federally registered lobbyists. So Joe Biden’s not technically lying and breaking the pledge to the American public, except of course for the few federally registered lobbyists that he has taken money from.
I think this is about six grand, but hey, it’s only six grand, right? I mean, I pledge to take zero, but I actually got six grand. But that’s not as bad as you know, 200,000 so I guess he gets a free pass on this, correct? No, it wouldn’t matter if he took $1, it wouldn’t matter if he took $10 million. The end result is the same. Joe Biden pledged to not take money from lobbyists and Joe Biden lied. Joe Biden can’t be trusted. Joe Biden is not out there fighting for the American people. You know, when he launched his campaign, he said, I work for you. Not any industry. That’s a lie. Because some of the federally registered lobbyists that he has taken money from. Uh, there was one from Google, there was one from Lockheed Martin, and there was one from Big Pharma. So he’s got big tech defense contractors and Big Pharma. All the people he swore he wasn’t going to take money from, and Oh, look at that. He’s actually taken money from them.
This is who Joe Biden is. He’s a dishonest character who cannot be trusted. A guy that is going to do whatever it takes to win this election, even if it means backtracking on the promise that he made to the people voting for him. I do not trust Joe Biden at all. I do not hate him as a human being. Don’t get me wrong about that. I feel for his family. I understand they have been through a lot and they have my deepest sympathies and I think Joe Biden as a person, as an individual, not politician, human being, I think he’s a good guy.
As your politician, he sucks and he does not deserve our vote. He’s literally out here lying to our faces in his campaign, comes in and says, oh, no, no, no, no, no. It’s okay. Because you know, the fundraiser hosts, they’re not registered lobbyists and often have diverse work portfolios that include much more than government relations. They’re out here with the doublespeak telling us that. Yeah, I mean, there are lobbyists, but that’s not their day job. Right? I mean, they also probably make a lot of money on Wall Street. Uh, you know, maybe they, they work at a nonprofit. Some of the Times. I think I saw one guy cutting grass for his neighbor, so I don’t know. Maybe that’s his job. I don’t know. But it’s unfair to say that they’re lobbying. They’re fricking lobbyist folks. Joe Biden said he wouldn’t do it and now he’s doing it.
That’s the end of the story. That’s it. That’s what it is. Joe Biden can’t be trusted. Joe Biden keeps lying. His latest lie, my God says that immediately after the Iraq war started, like immediately I, I didn’t support it anymore. I mean, I had just voted for it like five minutes ago, but then I was like, oh, I don’t support it anymore. Oh, I’ll try it. I already voted. Dang it. Oh Man. That’s not how it works, Joe. And that’s not how the history went to begin with. You’re lying to us there. You’re lying to us all over the place and hopefully the people out there in this country who still think you’re their guy are going to wake up to this and understand that you are not the person who is going to fix this country in the ways that it needs to be fixed.