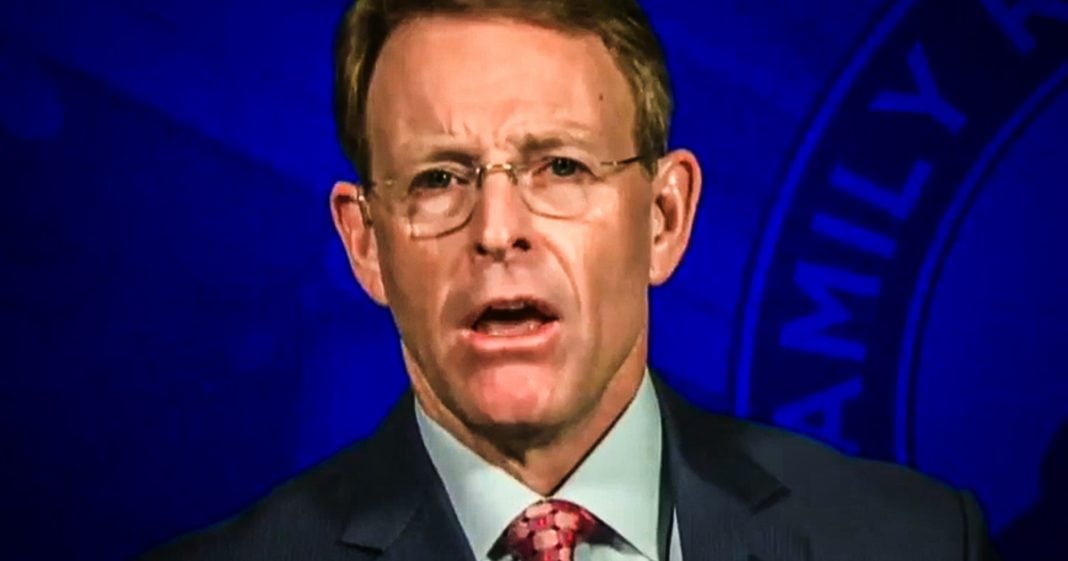 We have another item to add to the list of things that weirdos will blame for mass shootings before they blame our gun culture: The teaching of evolution. Evangelical leader Tony Perkins told Fox News this week that the teaching of evolution has played a role in radicalizing the people who commit these atrocities, which has no basis at all in reality. Ring of Fire’s Farron Cousins discusses this.

*This transcript was generated by a third-party transcription software company, so please excuse any typos.
Good News folks, Family Research Council President Tony Perkins has finally figured out why we keep having mass shootings here in the United States. It’s not because the ease with which people can get firearms that can kill, you know, dozens of people in a matter of seconds. No, that’s not it at all. According to Tony Perkins, it’s because we’re teaching our kids about evolution. That’s, that’s what’s doing this, that that’s why kids are out there murdering people because we taught them evolution. Here’s what Tony Perkins had to say on Sunday morning on Fox and friends on Fox News. He said, it’s an absence of morality. It’s really the result of a decades long march through the institutions of America driving religion and God from the Public Square. It’s not just about having a conversation about restricting those who should not have guns, but it’s also a discussion of the absence of a moral core in our culture.
I mean, look, we’ve taught our kids that they can come about by chance through primordial slime and we’re surprised that they treat their fellow Americans like dirt. It’s time. We talk about the results of the left’s systematic march through our institutions driving religious expression from the public square. Oh, you mean the constitution that says you can’t teach religion in schools that we do have that separation of church and state and that the state will not sponsor any particular religion. They’re all equal. Is that the conversation you want to have about getting rid of that? Because if we’re going to talk about getting rid of things from the constitution, I don’t think that’s the place we need to start to stop mass shootings. Right, but you see, Tony, you really did lay out a phenomenal point here and it’s the point I have been saying for years.
The only part of the US constitution that Republicans care about is the second amendment. Everything else they are totally fine with crapping all over with destroying, with abolishing, but not that second amendment that is the only one that is sacred to those Republicans and more to Mr. Perkins. His point, did we not have any violence on the planet prior to these, as you say, last few decades of driving religion from school? There was, there was no violence. Nobody ever killed anybody else on the large scale. There were no wars at all, nothing. Cause I’m pretty sure, obviously Tony Perkins is not an intelligent human being, but he has managed to con a lot of people into thinking he is an intelligent human being and he’s made a very good living doing it. War and violence and all of that has been around for decades, centuries, Millennia, and uh, a lot of it’s actually been carried out because of religion. Not because of the lack of it, but because of religion. Whether it’s religious wars of aggression,
rebellions for religious persecution. It happens all the time and it happens in God’s name. Tony, you know this, you know this, your intentionally playing dumb to avoid the real issue here. It’s not because God’s not in our schools. If you are a true Christian, you would believe that God is everywhere. What it is, is the guns. That’s what every mass shooting in the United States has in common and that is the only thing that every mass shooting has in common guns. That’s it. That’s where the discussion has to happen. We have to do something. We have to change this. Luckily, right now, and I don’t think Mr. Perkins understands this, there are plenty of court cases happening that have repeatedly said, yeah, guess what? You can ban semiautomatic rifles in your city, in your state, in your municipality, whatever it is. So in the court system, things are going okay, things are being made better, hopefully for the future. But if we listen to people like Tony Perkins, he is not only going to destroy all of the constitution with the exception of the second amendment, but it’s going to lead to more violence and more chaos because they continue to ignore the real problem.