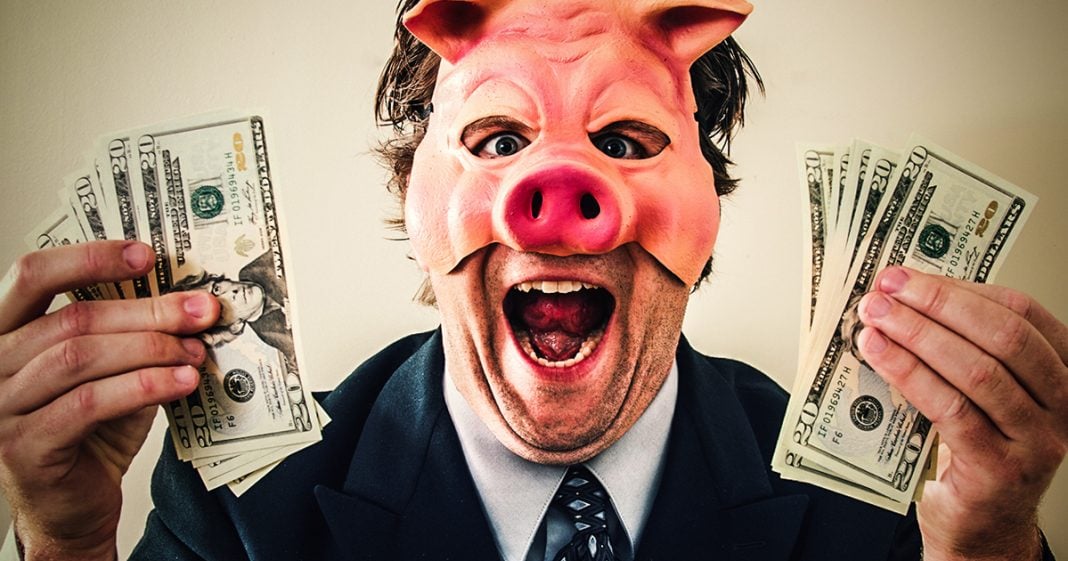 Since 2003, American workers have lost a third of their overall wealth. During that same time period, the wealthy have seen their value double, even with the horrible recession that happened between now and then. The system is rigged against us, and we need politicians who understand that we aren’t playing against an honest broker. Ring of Fire’s Farron Cousins discusses this.

*This transcript was generated by a third-party transcription software company, so please excuse any typos.
Well, Labor Day 2019 is officially behind us and I think it’s important after just coming off this holiday that is meant to celebrate American workers. I think it’s important that we understand that American workers today are earning less, they’re doing more but earning less than they were even just 15 years ago. And at the same time, the folks at the very top, the top 1% have seen their income in the last 15 years, double. Their assets. The assets they hold, the money they have on hand. The homes that they own have doubled since the year 2003 which means they came out of that recession just fine. You know, they weren’t hurting. They may have heard a little bit during the recession, but they’re all okay now. They were okay. Within a year or two after the recession ended, bank profits were back up to, you know, uh, historic levels. They’re even higher today. They’re getting those wonderful tax breaks. They can write off the cost of an entire new private jet as long as they make enough money to pay for it in cash. Hell yeah, they got that done. Meanwhile, American workers since the year, I believe 1964 uh, have actually seen their real wages increased by little under $3 an hour when adjusted for inflation.
I have said repeatedly, especially as we continue to march towards a recession, that this economy was designed to fail and this is what I’m talking about here, folks. We are now seeing the American worker lose so much value at such an expedited pace, right? One third of their value gone in 15 years. While the top 1% has seen, there’s double that gap between the haves and the have nots is growing by the month and that isn’t sustainable. That is going to cause a massive crash with our US economy because you know what? It’s fantastic that rich people can go out there and buy new jets and buy new yachts and buy new homes and do whatever the hell they want with their money. We can’t even afford our prescriptions each month. I mean, we have people in this country who have to cross the border to go buy insulin.
We have a huge percentage of the population that can afford even a $400 emergency. So if they blow a tire, they’re kind of screwed because they make so little, and that’s by design. Something is wrong with this country and we need politicians. We need elected officials who understand that something is wrong and there’s a handful of them running right now for president, and those are the people that we need to be paying attention to. Those are the people we need to be supporting because the people who came from the 1%, or have been a member of the 1% for far too long, they don’t understand the suffering that people in this country are going through. They don’t understand the importance. When we talk about a story like this, saying that, oh yeah, the, the bottom, uh, 50% of the country’s lost a third of their wealth in 15 years. They don’t understand what that means anymore. They don’t know what it’s like to not have enough money left over two days before you get paid again. They don’t know what it’s like to struggle to pay for their prescriptions. They don’t know what it’s like because they haven’t been there in so long. Most of them have never been there,
but we have and we are,
and people like Bernie Sanders are out there talking about this schism, this gap between the haves and the have nots every day and he has been since what the 80s I think. At least. At least publicly. He gets it, he understands it and yeah, he’s made some money since then folks. That doesn’t mean he’s not still out there fighting for the working class. He is the one who’s been going to picket lines. He is the one who has been standing with unions on strike. He’s the one fighting to make sure that people are getting paid for the jobs that they’re doing and they’re getting paid enough to support themselves and their family. You can’t say that really about any of the other candidates running right now. None of them, none of them have done what Bernie Sanders says and that is one of the biggest reasons why Bernie is my preferred candidate right now. The middle class is dying and most of the people running for president on the democratic side don’t seem to care any more than the Republicans do.