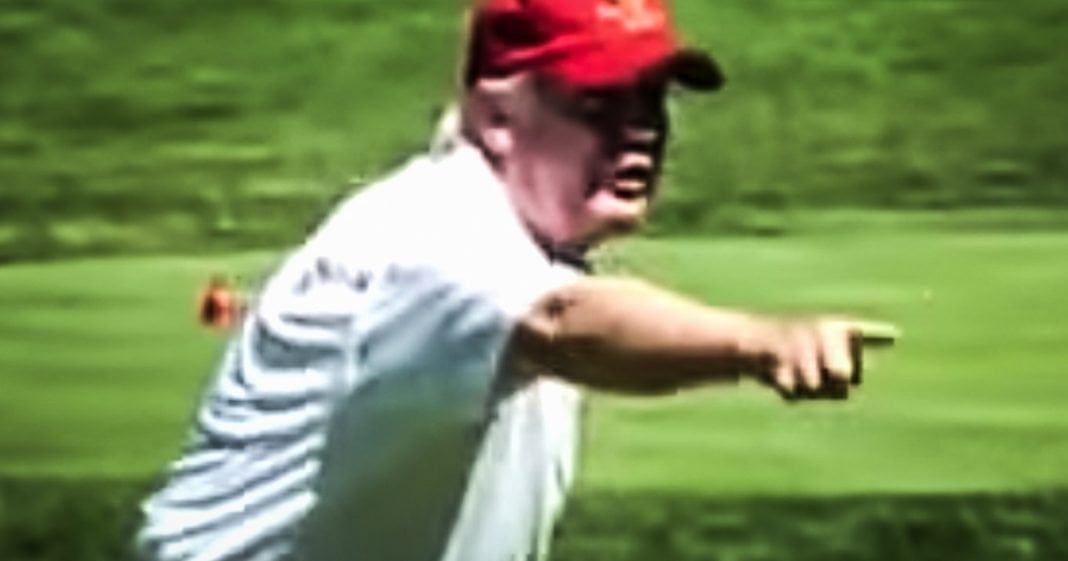 The weekend was filled with violence, tragedies, and a massive hurricane sitting off the Florida coast. So what did Donald Trump do? He played golf. He played a lot of golf. The man can’t be bothered by the fact that this country is very quickly descending into Hell, and he couldn’t care less about what happens to American citizens. Ring of Fire’s Farron Cousins discusses this.

*This transcript was generated by a third-party transcription software company, so please excuse any typos.
So over the Labor Day weekend, Donald Trump was supposed to head over to Poland for a world war two ceremony. But because Hurricane Dorian was churning out there in the Atlantic Ocean at the time, Donald Trump said, hey, I understand this is an important ceremony, but we got bad things about to happen here in the United States. I need to be here. I need to be on alert. My country needs their president is pretty admirable, right? You know, he’s gonna be here for us. He’s going to help us. He’s going to be paying attention to the catastrophe. And then he went golfing all weekend. Over the three day weekend, Donald Trump spent two of those days, add one of his own golf courses, you know, letting taxpayers once again pad his own pockets. And he certainly was not paying attention to any of the atrocities that actually happened over the Labor Day weekend. Obviously the biggest one out there is Hurricane Dorian, which Donald Trump during a little a press conference on it said he’d never heard of a category five.
I’ve heard of one. I didn’t know that we’ve ever seen one. Uh, yeah, we’ve, we’ve seen five in the last five years. There have been five category five hurricanes in the last five years. Now Dorian at its top speed that it hit 185 miles an hour, sustained winds at one point. That is one of the most powerful hurricanes ever on record. It has since died down, but not, uh, before spending 24 hours sitting over The Bahamas causing horrible damage. I mean, uh, I’m sure by now you’ve seen some of the videos and pictures floating around social media, you know, waves crashing into people’s living rooms on the second floor of their apartments. That’s how bad the flooding was and the storms just now starting to leave the area. It’s also been battering the Florida coast. Those outer bands have just been smacking Florida all weekend. And of course it’s now going to head up.
Maybe it’ll hit Georgia, maybe South Carolina, maybe even further north. Maybe it’ll take another turn and get a little bit closer to Florida causing more damage, whatever it is. That’s something Donald Trump needed to be paying attention to. But instead he went out there and basically bragged that, hey, this is the biggest storm we’ve ever had. And it happened under me guys. But of course, that was not the only atrocity that happened this past weekend. We had a, another round of shootings in the state of Texas. On Friday evening we had a teenager go into a football stadium in mobile, Alabama and shoot up a almost two dozen people. And then of course we had the, uh, deadly dive boat fire off the coast of California, essentially a weekend of catastrophes, a weekend of atrocities. And what does Donald Trump do? He goes and plays golf. You know, these atrocities, or at least Dorian itself was too intense, too threatening for Donald Trump to make the trip over to Poland, but certainly not too threatening for him to go spend the weekend on his own golf course.
And this is a man who, let’s not forget, used to complain that Barack Obama golfed too much. Fox News used to complain on a weekly basis that Barack Obama golfed too much. Donald Trump has now golfed in office more than any other president in the history of the United States, and he’s only been in office for two and a half years, and he already holds that record. This man doesn’t care. He doesn’t care about what’s happening in this country. He’s not gonna do anything to make sure that our first responders are ready to go when this hurricane finally smacks the United States, he’s not doing anything about the issue of gun control. He told us that after the last round of mass shootings we had over a weekend. He said, I’m not going to do anything, there is no need to mess with it right now. And then, wow, look what happened and look what’s going to continue to happen because we have a president that doesn’t give a damn about the American public