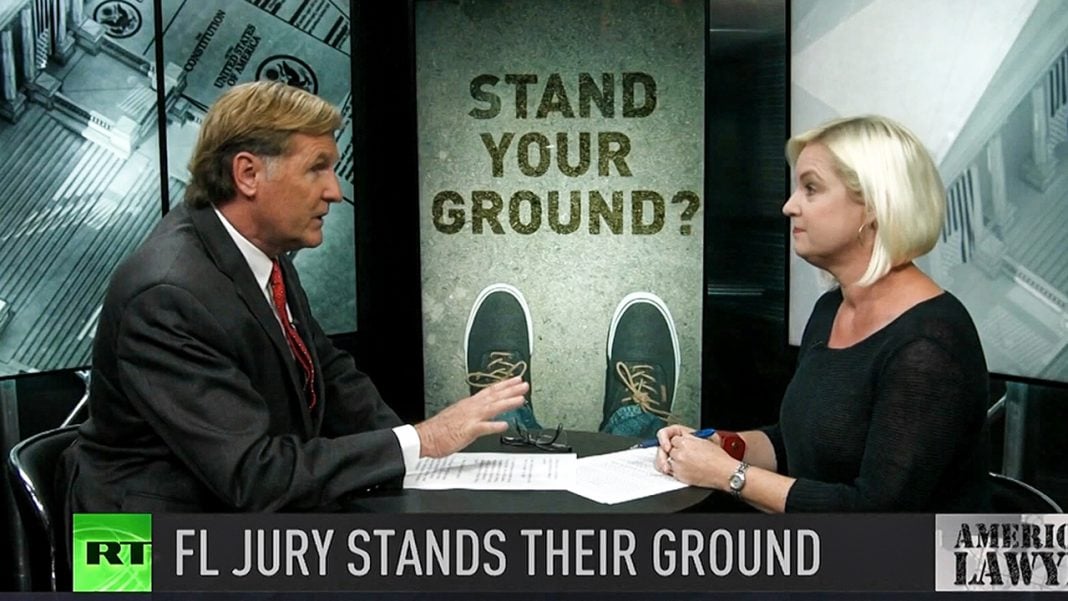 Via America’s Lawyer: Mike Papantonio is joined by legal journalist Mollye Barrows to break down a Florida case of manslaughter, in which an unarmed black man was shot and killed in a grocery store parking lot. The defense argued the shooter was abiding by the “Stand Your Ground” law, but jurors ultimately decided otherwise upon reviewing surveillance footage.

Mike Papantonio:             A Florida jury has concluded that a controversial application of the Stand Your Ground law was invalid in the shooting of an unarmed black man outside of a grocery store in Clearwater, Florida. Legal journalist Mollye Barrows joins me now to talk about the verdict. This, this is a case that got a lot of attention and it should have after the Zimmerman case where the Stand Your Ground actually succeeded. I mean, for all practical purposes, it was basically more of a self-defense, more than just stand your ground. But, Mark O’Mara, who’s a dear friend of mine, tried that case and he said his focus really was less Stand Your Ground as in, in, in, in relationship. It was more just common law, self-defense kind of argument.

Mollye Barrows:                I know, it’s so interesting all the way around because this law is so open to loose interpretation, if you will. So the facts of this particular case, you have a convenience store, Tampa area. The man who was accused of manslaughter, the one who shot the victim, Michael Drejka, he was angry because the victim’s girlfriend had pulled into a handicap parking space and she didn’t have the proper identification to do that. So they got into a little bit of a verbal altercation according to witness statements. He was giving her a hard time. She just went on walking. Well and she, her boyfriend, Markeis McGlockton, was in the car and, with their five year old child and he gets out and basically shoves the other guy, Drejka, who falls to the ground and surveillance video shows that he’s starting to walk away and Drejka opens fire and kills him and he eventually dies.

So basically he said, I, I had to shoot, I was in fear for my life. I thought he was going to come back and stomp me and beat me. But the surveillance video clearly didn’t show that. However, the Pinellas County Sheriff said it was, didn’t charge him because they said it was a proper application of Stand Your Ground. And it wasn’t until public pressure that the prosecutor came forward and charged him with manslaughter. I think it was a month later.

Mike Papantonio:             Okay, let, let, I think part of this has to do with the Drejka. Okay. First of all, they couldn’t call Drejka to the stand because he was a loony tune.

Mike Papantonio:             He would go to stores and malls and he would find people parked in handicap…

Mike Papantonio:             So, so a real nutcase and he, it was impossible to put him on the stand. So he, they didn’t really have the pure self defense case, but the truth is he shot the guy as he was walking away.

Mike Papantonio:             And I think what this does is this starts, this legislatively in Florida, I don’t think anything’s gonna change. I don’t think this is the kind of legislature…

Mike Papantonio:             In Florida that is progressive thinking enough to understand a jury heard your facts about your Stand Your Ground. This guy had no reason to shoot. And the point being, he was such an odd ball to begin with.

Mollye Barrows:                So it made it okay. That’s part of the reason why I think he had the gun. But like you said, he, he, if you’re really trying to apply Stand Your Ground, this isn’t the best guy to be defending in this particular case. So I think what’s great about the fact that the jury came back and said that it wasn’t applicable in this case that he was found guilty of manslaughter basically says that this law is so open to interpretation that it turns into the jury’s job now to hold law enforcement accountable. Did you actually do your job when you allowed this person to use this defense? Or did you do your job by not allowing somebody to use it?

And, you know, like I said, I think Florida was the first to pass a Stand Your Ground law like this in 2005 but we already had castle doctrine type laws and other laws across the country that allow people to use self defense. But what makes Stand Your Ground different is that you don’t have to retreat. If you feel like your life is in danger or you about to be imminently bodily harmed or there’s going to be the commission of some felony is imminent, you, I could just blow somebody away if I felt, oh my life’s in danger and I don’t have to run. I don’t have to retreat as a way to avoid the situation.

Mike Papantonio:             Yeah, the argument I think at some point was the man pushes him to the ground.

Mike Papantonio:             This, this had, it was an all white jury. You know, a black man that was shot. So I think when you start taking a look at these facts, even though this is kind of, these are kind of, we’re, we’re like a tree falling in the forest.

Mike Papantonio:             Where it comes to talking about what the Florida legislature is going to do.

Mike Papantonio:             They, they absolutely will do nothing and we’ll see more and more of these. But the, you know, the killing of Trayvon Martin made the headlines back in 2012. I don’t know that this case has this, this policy has been tested enough. This is probably in my way of thinking, one of the first of maybe 10 or 12 first serious tests of Stand Your Ground.

Mollye Barrows:                I think you’re right. And I think it’s gonna take additional public pressure in individual cases like this to really bring it to people’s attention to think critically about it. Otherwise people are just going to continue to use it as an excuse, I think, to justify murder.

Mike Papantonio:             Yeah. Every nut bird in the world has a concealed weapon and he shoots because he doesn’t…

Mike Papantonio:             Yeah, it doesn’t believe that somebody ought to be able to park in a handicap, that was part of the case too.