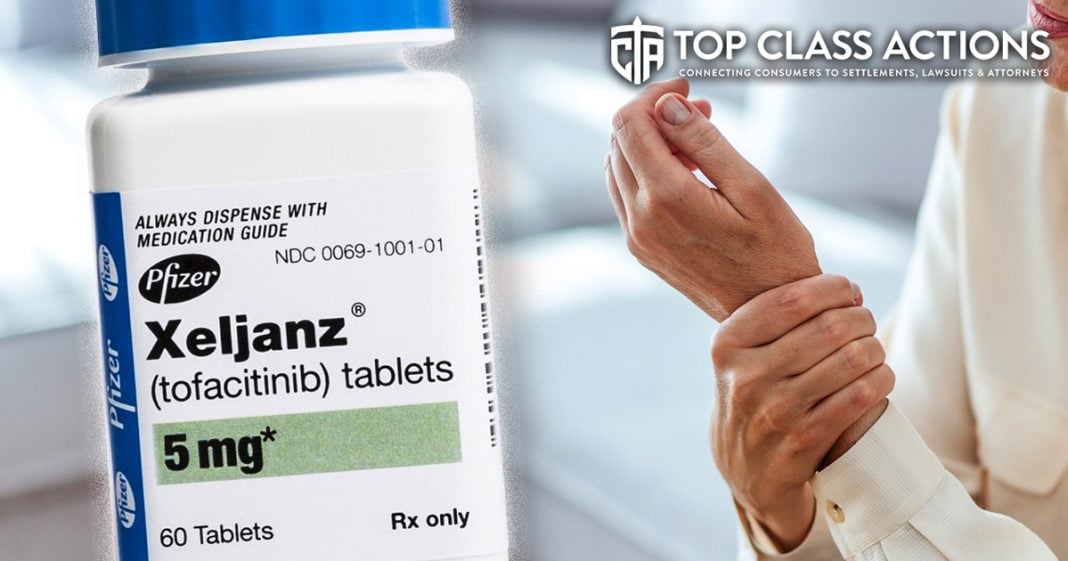 A new boxed Xeljanz FDA warning for blood clots and death may be relevant to consumers taking the drug for ulcerative colitis. Xeljanz is a small molecule medication used to treat psoriatic arthritis and rheumatoid arthritis. According to Verywellhealth, the drug works by inhibiting pathways in the cells that play a role in inflammation. Although the drug is often used to treat arthritis, it is also used in the treatment of ulcerative colitis. Ring of Fire’s Farron Cousins discusses this with Scott Hardy from Top Class Actions.

Farron Cousins:                  For anybody who’s spent any time watching television within the last few years, you’ve probably heard the name Xeljanz. In case you’re not familiar with it, Xeljanz is a medication used to treat arthritis, various different kinds of arthritis. But recently the FDA decided they had to stick an extra warning label on boxes of Xeljanz after it was revealed in post-market studies that this product might actually kill you. Joining me now to talk about this is Scott Hardy with Top Class Actions, and Scott, FDA always seems to do their best work after the fact because they didn’t bother to do the studies that showed that this thing could potentially kill people till after they had already approved it and given it to thousands of people across this country. Tell us what’s happening here.

It could be a blood clot in your legs or your arms, deep vein thrombosis and all of those can cause major, major problems for individuals. And so you want to be very aware and talk to your doctor if you’re taking Xeljanz to find out if you are at risk for having a blood clot, for having a pulmonary embolism because if you experienced that, you know, those things can kill you. And unfortunately, that, that, that warning was just added to those boxes. Otherwise people were prescribed this and had no idea that that could happen.

Farron Cousins:                  Right, and this is a drug that’s been on the market for several years at this point. So there are thousands upon thousands of people in this country alone who have been taking this medication. They didn’t know these risks were there because I guess at the time, we may have found out later if there’s lawsuits, at the time though, allegedly the FDA did not know that these problems were there. And to me that really highlights a problem with our drug approval process here in the United States.

You know, oh, we’ll let you do less testing before we approve it. So long as after we approve it, you do some post market studies, which basically turns the US population into the guinea pigs here. We didn’t sign up to be experimented on by the drug companies, yet that seems to be exactly what the FDA is allowing to happen because Big Pharma wants to push out as many drugs as quickly as possible so they can make billions of dollars ripping us off on that front.

Scott Hardy:                          Right. And we, we see this happen all the time where Big Pharma comes out, they push out a drug like Xeljanz and they say, okay, we have this drug out there. And then it goes from their test bed of a few thousand people to hundreds of thousands of people and people start dying and they go, oh wow. I had no idea that was going to happen, but they still a few billion dollars worth of this drug. And then they, they, you know, a bunch of attorneys come along, file lawsuits against them for these folks who were dying for these folks that were hospitalized and they pay out $1 billion in, you know, in payments to these lawsuits. Well, from the pharmaceutical company’s perspective, that’s just the tax they have to pay.

You know, they pulled in $2 billion, they have to pay out a billion. Oh, they still made $1 billion in profits on that drug. Sorry, not sorry. We’ll keep on, you know, keep on moving along here. And so we want to know, you know, if, if anybody has actually taken Xeljanz and a family member had a pulmonary embolism, deep vein thrombosis was hospitalized, you want to make sure to report that to, you know, into a lawyer to see if there is a possibility for compensation in the end. Because that’s how all of these things start is the attorneys find out about it and start working hard to represent all of these injured folks who took this drug with no idea that they could have these dangerous medical side effects.

Farron Cousins:                  And you really hit a good point right there in the fact that yeah, these companies, whenever they put out a drug turns out to be dangerous. We typically always find out in the documents that they knew these were things that were going to happen and that’s why they end up losing the lawsuits. So then they pay out, you know, maybe a couple hundred million and some very rare cases, a billion or more, but they’ve already made a couple of billion off the drug. So they don’t actually lose any money. They build that into the cost of doing business.

If we have to pay out x amount in lawsuits, it’s actually more profitable for us, for us to just leave this on there and cover up the dangers than it is to warn people and potentially lose sales. And I’m not saying that that is what Xeljanz has done. I’m just saying that is the typical playbook and the, you know, modus operandi of what we’ve seen from Big Pharma over the last few decades.

For more information about this issue, follow the link in the description of this video. Head on over to Top Class Actions and don’t forget to sign up for their weekly newsletter. Scott Hardy with Top Class Actions. Thank you very much for talking with me today.