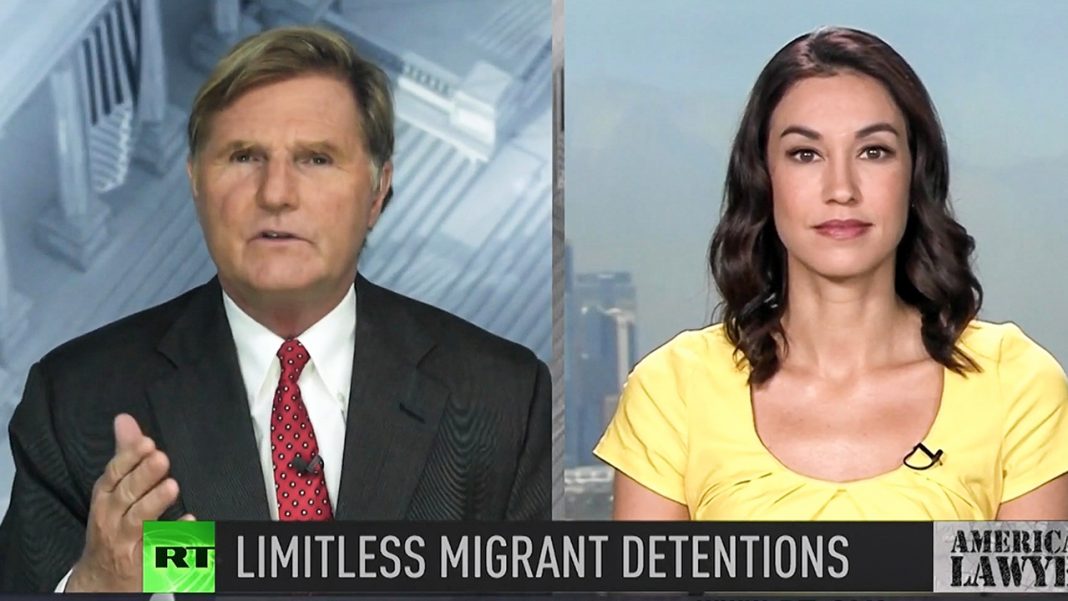 Via America’s Lawyer: RT correspondent Brigida Santos joins Mike Papantonio to walk us through the Trump administration’s push to amend the Flores Settlement as a way to keep migrants and their families detained for even longer than the 20 days initially mandated under the act.

Mike Papantonio:             The Trump administration has released a new regulation that could allow the indefinite detention of migrant families and children who enter the United States illegally. RT’s Brigida Santos joins me now to talk about this story. Brigida, if approved the new rule is going to replace the 1997 Flores Settlement. For those who don’t know who that is, what that is, the Flores agreement, talk about it and let’s talk about how that Flores agreement is now so different.

Brigida Santos:                   Well, since 1997, the Flores Settlement has protected migrant children by guaranteeing that they be placed with a relative or close friend as soon as possible, or that they’re detained no more than 20 days in an unlicensed facility. The rule applies to unaccompanied minors as well as those who enter the United States with a guardian. Last year, the Trump administration justified it’s controversial family separation policy by claiming that the Flores agreement would not let the government detain families together long enough to resolve adults legal cases. But other administrations have typically released families until their cases were heard months or years later, in some cases. The new regulation is basically changing that.

Mike Papantonio:             Well, it doesn’t take a rocket scientist to understand this indefinite detention is a violation of due process and equal protection unless it, under the constitution, unless there’s something special there like the Patriot Act that cut right through all of our constitutional rights. How likely is this rule to be approved? From a constitutional standpoint, I see all kinds of flaws. What is, what is your take on that?

Brigida Santos:                   Well, the new regulation is scheduled to take effect on October 22nd but only if it’s approved by the federal judge who first approved the Flores Settlement back in 1997. Last year she denied a similar request, so it’s very unlikely that she’s going to change her mind this time. Now, even if she does approve it, the rule will still likely face many legal battles. In fact, at least 19 states have already filed a federal lawsuit challenging this rule and that suit is led by California and Massachusetts. California of course, has the largest migrant population in the country and is a sanctuary state.

Mike Papantonio:             Yeah, I don’t see, constitutionally I think this is dead on arrival. Of course you understand the way they got around that with places like Guantanamo and all is to say, look, we have the Patriot Act. All these constitutional rights are not going to be applicable, that is simply not the case in this particular situation. So I don’t see that going anywhere. What are California sanctuary, sanctuary laws and, and how is the Trump administration responded to state immigration policies? And when we, when, when we discuss the sanctuary laws, California has said, we regard this differently. We’re, you know, we want, we want to have that state autonomy to be able to do what we want to do, where it comes to immigration. Give me your take on all that, would you please?

Brigida Santos:                   Yeah. California’s sanctuary bill prohibits cooperation between local or state officials and federal immigration enforcement. Now the Trump administration has responded by threatening to withhold funds, federal funds from sanctuary cities, and has been incredibly hostile to states that try to govern themselves on immigration, which is incredibly ironic for the Republicans who usually are for more state’s rights. Now, the acting director of US citizenship and immigration services says that the new regulation establishes a supremacy clause that wipes out state licensing challenges for federal authorities who try to house migrant children. Take a listen to what else he had to say.

Ken Cuccinelli:                    The licensing scheme that’s established by the Flores regulation will make it consistent across the country and um, and, and take that uncertainty out. It also, by the way, takes this out as a weapon for states that are effectively sanctuary states and would use this regulatory opportunity as a way to effectively shut down what ICE needs to do in this space.

Brigida Santos:                   Now the 19 state lawsuit argues that this new policy interferes with state’s rights to set their own licensing requirements to ensure the health, welfare and safety of migrant children. While the lower federal courts are expected to give the state a temporary win, some legal experts say that the president does have broad power over immigration policy, you know, unless they can prove discrimination. So if this lawsuit does make it’s way to the Supreme Court, it could fail.

Mike Papantonio:             Okay. Well, so the best, so the arguments here are what we see very often in a constitutional argument is what we call police powers of the federal government. Federal government says we have a direct responsibility where it comes to health, safety and welfare to protect the citizens of the United States. That the citizens of the United States would then trump the non-citizen the United States. On the other side of it, the, the states are saying, well, we have some autonomy in how that’s determined and the real fight is going to come, I will tell you this, Trump will win on holding back funds from those sanctuary states.

I can very well see that, that happening. At least we’re talking narrowly about, about sanctuary, sanctuary states right now, sanctuary, sanctuary areas right now. He can win with that. And when you, when you, when you load up that police power versus some other standard of power that a state might want to try to enforce, police power is pretty strong. And so that’s why you heard, you know, that statement just by, that we just heard.