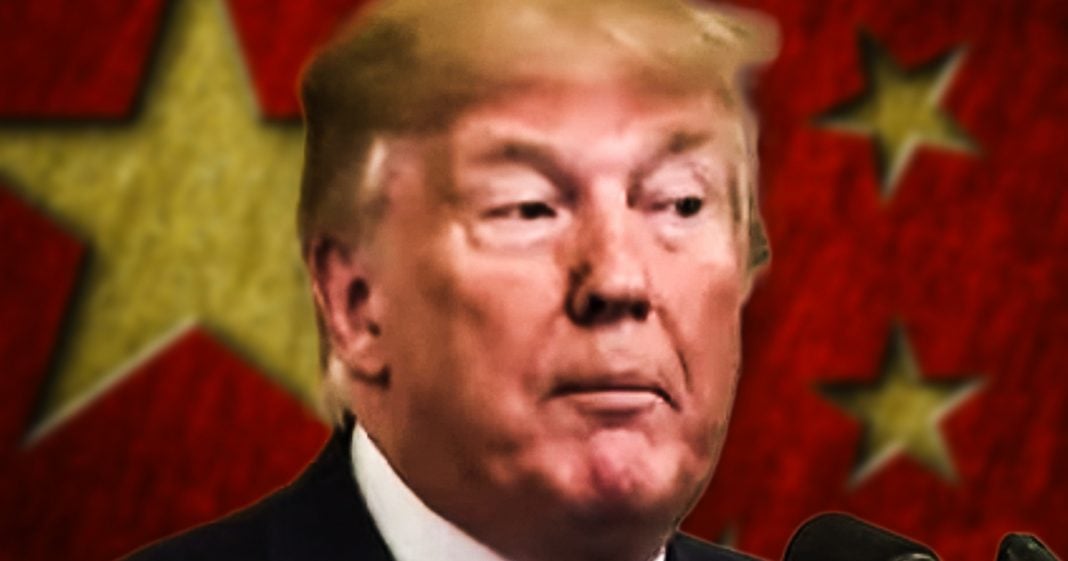 Earlier this week, Trump tried to ease fears that the trade war was getting out of control by saying that he had a talk with China and they have restarted their trade talks. A day later, Chinese officials came forward and said that they have no idea what the President is talking about – the call he claims happened never actually happened. Ring of Fire’s Farron Cousins explains what’s happening.

Earlier this week, perhaps in an attempt to calm the markets before they opened on Monday morning. Donald Trump told reporters while he was still at the g seven summit that, hey, don’t worry folks about the trade war because my people back in the u s have been on the phone with officials from China and they’re working on a new deal. China wants to restart the talks. They made phone calls to my people and they’ve got it covered, so don’t worry. Things are going to get better. And again, I think he did that because he wanted to calm the markets before they opened on Monday morning. Obviously it didn’t work and there’s one reason why it didn’t work because those phone calls that Trump says China made to the u s never happened. The Chinese government has now had to come out and multiple different times this week and say, Donald Trump is lying.

The president of the United States is lying to you about talking to us about restarting these trade talks. It didn’t happen. You know, for a man who needs these trade talks to be reopened because that’s going to cost him the election in 2020 100% why would he go out there and lie about something that is easily, you know, China, China can easily come out and say, yeah, this isn’t true. This didn’t happen. So that only makes Trump look worse. I know he was trying to call him the fears and call them the market and do all that, but if he wanted to really call them the market, he could call China and say, listen, I’m going to lift the tariffs. We’re going to start over from scratch. No tariffs on you right now. No tariffs on us right now. Let’s go back to zero. And then we’ll have these conversations.

We’ll put tariffs where they’re needed. Cause yes folks, sometimes they are needed obviously to help keep American businesses competitive to a degree. But he won’t do that. He won’t reset the clock. He won’t send it all back to zero to start over from scratch because he doesn’t know how. The only thing this man knows how to do is to lie. And that is exactly what China is trying to warn us about right now by telling us again repeatedly. They had to say this multiple different times this week because he keeps lying about it. They’re saying, we’re not calling you. We’re not having these talks, and part of the reason they’ve repeated it is because even Steve Mnuchin came out and said, oh yeah, yeah, I’m totally talking to these guys all the time. Great conversations. They’re lovely folks. Things are going so well. Things are not, and for those who’ve been paying in depth attention to all of this, you understand that China has not been very happy with any of the talks they’ve actually had so far in a couple months ago.

They basically called it quits in the middle of a meeting because Donald Trump, while they, they had their delegation there in China, Trump’s back here in the United States. They’re having their talks and Trump suddenly tweets out that he’s putting more tariffs on them and China says, hold up. We had an agreement that you wouldn’t do this. We’re sitting here at a table negotiating with your people and you screw us over behind our backs on Twitter by, and that was the last talk that has happened. Trump’s too stupid to figure this out. He’s too stupid to work this out, and I can promise you right now, this trade war is going to continue until a Democrat gets sworn in as president of the United States.