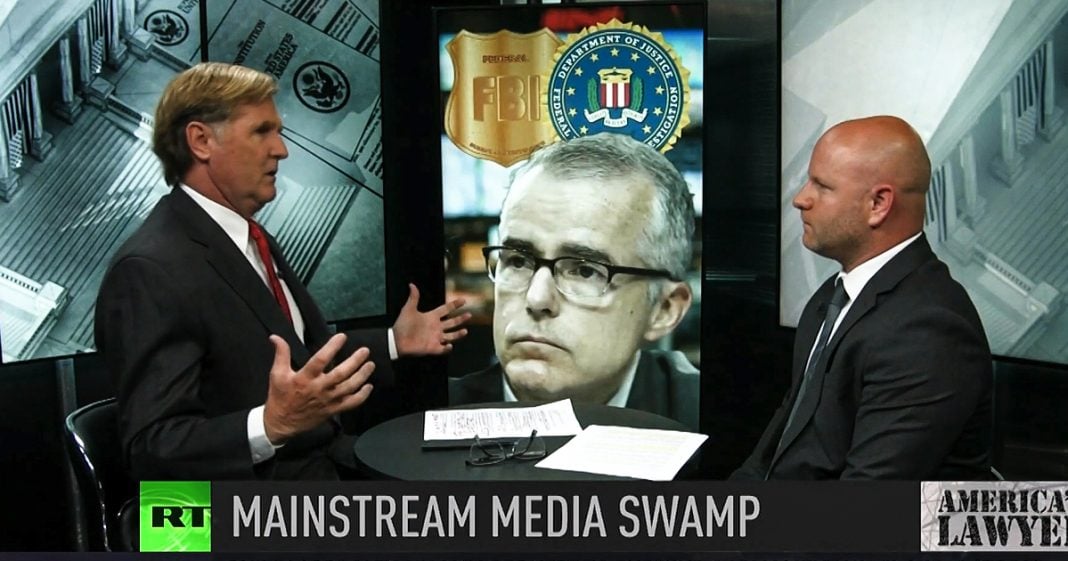 Via America’s Lawyer: Mike Papantonio and Trial Lawyer Magazine editor Farron Cousins talk aboutCNN hiring former FBI director Andrew McCabe, which has been met with fierce pushback given his intelligence background. What’s with the revolving door between Capitol Hill “spooks” and the mainstream media these days?

Mike Papantonio:             Corporate media outlets have become the new landing zone for former intelligence officials looking to make an easy paycheck and MSNBC and CNN have hired at least 15 former officials just in the last two years. Okay, look, this story, I love this story because it’s almost, it’s okay, you’re Democrat, right? There was a time with Democrats believed that the spook industry was exactly that, very spooky. They started wars that shouldn’t have been started. That got us in Iraq. They killed Pinochet. I mean, I mean, Allende to replace with Pinochet, those types of things happened for decades.

And then you had Howard Zinn, Howard Zinn was the hero of these liberal thinking Democrats. I mean, look, I’m one of them. I’m way left to, as a progressive. And so I come up with Howard Zinn, I’m believing what he’s saying, and I, I still to this day believe the spook industry is very dangerous. But the compromise, what’s the new compromise? The new compromise is if Brennan or Comey or somebody who’s willing to go out and talk about Russia and Trump by God, we’re going to hire him. That’s what I see happening. What’s your take on it?

Farron Cousins:                  Well, absolutely and look, you know, when you talk about, you know, back in the day, let’s also remember that even 10 years ago, Liberals and Democrats thought, you know, these are the bad guys.

Farron Cousins:                  So this is a shift that really did happen when Trump came about and they’re really, you know, doing their best to embrace that the enemy of my enemy is my friend, when in fact, no, they’re still your enemy. Because just because they’re out there saying Trump is bad doesn’t mean they want to push us into yet another Middle Eastern war or maybe a war down in Venezuela. You know, these people still have access. Their names, you know, whether you like them or not, do have a little bit of credibility and corporate media wants to cash in on that.

Mike Papantonio:             Okay. But, who are these people, Farron? These are the people that got us involved with Iraq.

Mike Papantonio:             Okay. Right. These are the people that showed up every night on CNN and MSNBC. My God, I remember, I remember them having a, a big map on the floor and these very same characters would draw the map of Afghanistan. We’re going to do this. We’re going to do that. Who were they working for? They were working for the weapons industry. They were working for the military complex. That’s who they are. The folks at MSNBC know that. The folks at CNN know that, but here’s what they’re willing to say. The same thing they do with advertisers. Now follow me on this just a second. Advertisers own the media. Okay. Now we have almost a state TV.

When you have these cats showing up to tell you what the nightly news is, that’s state television, because these are the guys, that war after war, they’ve gotten us there. You know, conflict, imperialism, you name it, they’ve made that happen on the, on behalf of the US government. Now, MSNBC is in such bad, bad condition with ratings. CNN, of course, is barely a blip on Nielsen, so they’re saying, let’s stick with our story. The story that sold better for us, the story that in their mind, they still don’t understand it’s the story that got them in the dump, which is Russia, Trump all these conspiracy stories. That’s why they’re, that’s why they’re dying a 1,000 deaths.

Farron Cousins:                  You know, the people calling the shots at MSNBC, CNN, they’re not thinking in terms of what’s actually going to be good. They think what can get the most eyeballs, eyeballs the quickest? Andrew McCabe, who was hired about a week or so ago, been in, had been in the news a lot, so they say, well hey, this is a big name. We can get this. We can put eyeballs on there. But I think the public in general, the public doesn’t care about these people. The public doesn’t like these people. And, you know, just, just to kind of add to the point here, when we talk about state TV, we also have to understand Fox is snatching up everybody from the Trump administration.

Mike Papantonio:             Yeah. The focus right now is on MSNBC and CNN, but, but you’re right. Fox has done the same thing, but these guys, these guys are the uglies of the ugly. Okay. They got us in a, in Afghanistan. They’re the ones that have us, international imperialism gone crazy. They’re the sales people for the weapons industry. And so, so Andy Lack and that Phil Griffin cat with MSNBC are going to do anything they can to continue selling the same story that has their ratings in the dump right now. So they, they’re, what they’re doing is they’re narrowing down the people who watch their programming, narrowing it down to almost nothing. And so these guys don’t help that. I mean, that’s, now they’re going to be saying what this small group of people want to hear, but it, you know, it doesn’t help.

Farron Cousins:                  CNN doesn’t surprise me at all because they’ve always been really bad with it. But MSNBC, you know, trying to market themselves as we’re the more liberal one. You’re bringing on people who represent everything your audience hated five years ago.