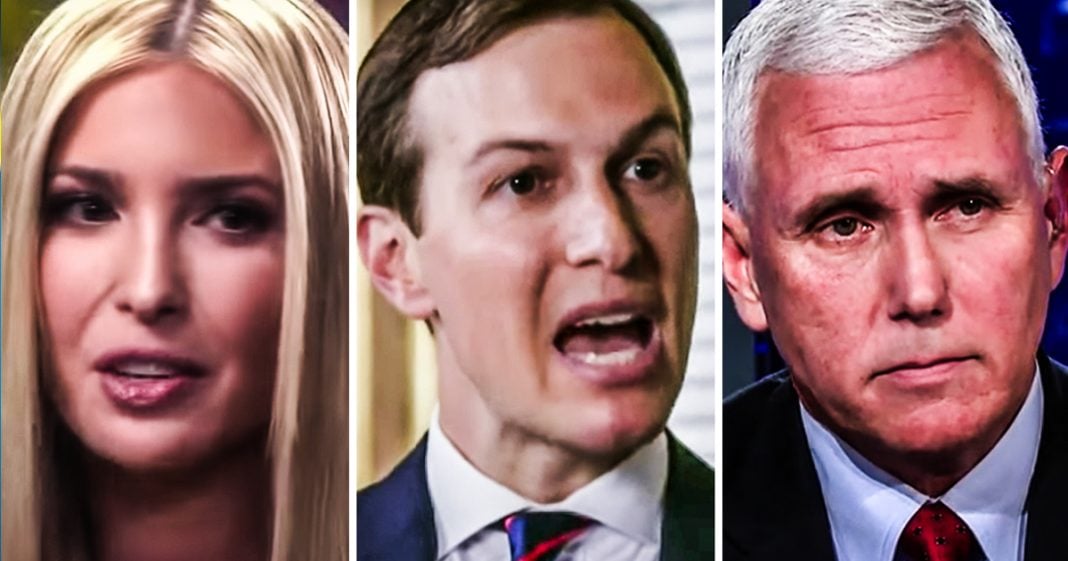 According to a report by Axios, Ivanka Trump and Jared Kushner have been pushing for Donald Trump to run with a different VP in 2020. They apparently wanted the President to swap out Pence for Nikki Haley, who has been more vocal in her support for the President over the past few weeks. Ring of Fire’s Farron Cousins discusses what’s happening.

Recently, Nikki Haley, the former UN ambassador for Donald Trump’s administration and the former governor of South Carolina tweeted out seemingly unprovoked that she would not be joining Donald Trump’s ticket in 2020 replacing Mike Pence as the vice presidential candidate. And this kind of took people by surprise, not that she was declining the job, but that it was ever up for consideration. Well, according to Axios reporter Jonathan Swan, the reason Nikki Haley decided to let everybody know that this wasn’t happening is allegedly because Jared Kushner and Ivanka Trump had been pushing their father to get rid of Mike Pence and replace him with Nikki Haley. Now, from a purely political strategy standpoint, that actually makes a little bit of sense, right? To a certain degree, Donald Trump is losing support among women here in the United States without female voters. He is not going to win reelection. And I’m sure Ivanka and Jared, maybe after talking to some people smarter than them, decided, you know what, let’s get rid of the old white guy and replace him with a woman.
Maybe that will help. And yeah, we see politicians do this all the time. Presidential candidates do it all the time. Ted Cruz did it with Carly Fiorina. But here’s the thing. By doing that, had they followed through with this, had Donald Trump listened to his daughter and a son-in-law, they could have potentially alienated the right wing evangelicals because after all, Mike Pence is a hardcore evangelical, uh, basically a zealot would be the appropriate term. And even though his religious views are wrong and repressive, he still does recruit the religious right base that Donald Trump needs to win. And without pence on that ticket, suddenly you’re looking at a presidential ticket that is essentially Satan himself, Donald Trump, all the affairs, all the, uh, ex wives, the hush money payments, the horrible abusive comments directed at people here in the United States. Those aren’t exactly things that sit well with evangelicals. I know a lot of them have thrown their support behind Trump, but the average everyday goes to church twice a week.
Person here in the United States doesn’t like those things, but they do like Mike Pence, and they believe that pence keeps Trump grounded, at least in some kind of pseudo religion. Without pence you’ll lose those people. Nikki Haley’s not going to bring those folks back, so I don’t think they’re gonna switch over and vote Democrat. They ended up staying home, or they ended up not voting, or they ended up leaving the presidential area blank, all of which would hurt Donald Trump. And so I guess the, a Trump administration finally for once made the calculated decision that, you know what, we might lose with women, but we will definitely lose evangelicals if we ditch Mike Pence. And so that’s why it’s gonna be all the more rewarding in 2020 if Donald Trump loses, because now it won’t just be him. It’ll be Mike pence being told by American voters, we’re all so sick of you and your oppressive, phony religion.