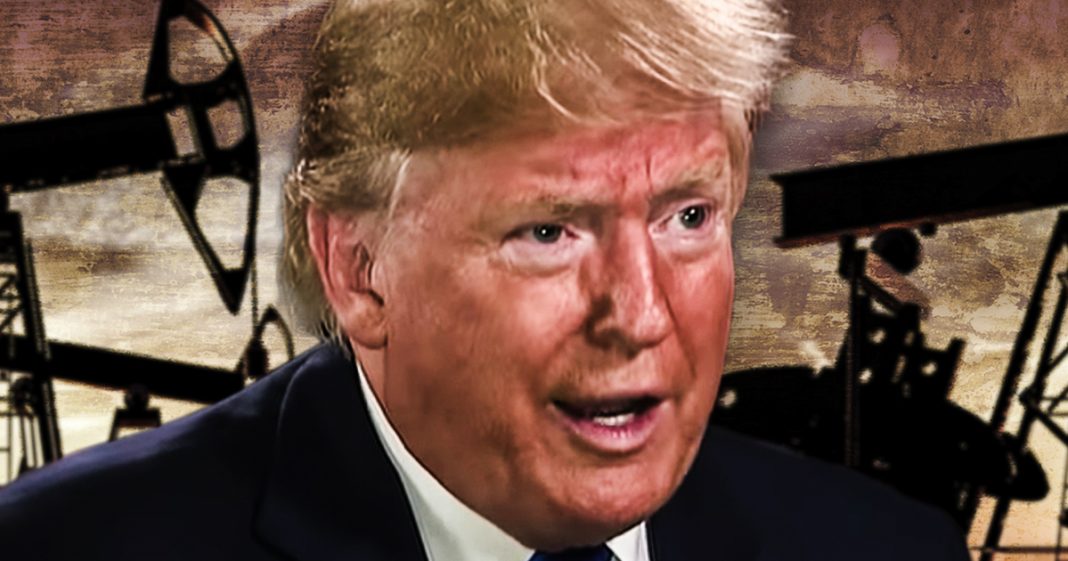 Donald Trump’s administration is preparing to release their new methane standards which will allow even more of the volatile greenhouse gas to be emitted in our country. Some, though certainly not all, oil companies and lobbyists are actually warning that this is a very bad idea that could have disastrous consequences. Ring of Fire’s Farron Cousins discusses this.

Yesterday, the Trump administration’s EPA announced that we were done with the Obama era methane rules, right? We aren’t going to be beholden to the past anymore. We are moving forward as a country by moving us backward on environmental protection. And that is exactly what these methane rule repeals are going to do for us here in the United States. Uh, for those who are not familiar with it, we have discussed this in the path, uh, past methane is a far more effective greenhouse gas than even carbon dioxide because it can hold more heat. It can hold it longer and true. It does not last as long in the atmosphere as CO2 in its short life, which is still a couple of decades. It will hold in even more heat, thus creating a super warming effect. And the Trump administration says, you know what? We’re cool with that. We’re fine with it.
You know, these, uh, fossil fuel companies, you no longer have to monitor whether or not you’re leaking methane out into the atmosphere. You don’t have to worry about all these new fracking wells, which are a huge source of methane. Don’t worry about that, right? You’re good. Just go out there and do what you do. Now, most fossil fuel companies and the American Petroleum Institute are totally great with this. They think, hey, this is awesome. Great. Another thing we don’t have to worry about, but there are certain API members including both Exxon and Shell who are actually out there warning that the president’s latest deregulatory move is really, really bad. This is a stupid move. These oil companies believe, but as always there’s a caveat. It’s not a stupid move because it’s going to destroy the environment. They know it’s going to destroy the destroy the environment. They don’t care about that.
What they care about is, as I just mentioned, a major source of methane here in the United States is fracking and they still want a market fracking as a bridge fuel and that is a bridge to nowhere, ladies and gentlemen, but they want to push it. They’re making a ton of money off fracking and they’re trying to tell people that, hey, this is so much cleaner than coal, even though it’s not. And so if they go out there, keep the fracking, these regulations have been repealed, more methane goes into the atmosphere, then suddenly, oh, people understand how dirty fracking is and how bad for the environment it is. And that destroys their little myth of natural gas from fracking becoming a bridge fuel. People will be outraged. People will want it stopped. Politicians will pass ordinances saying, you can’t frack here anymore. Scientists will come out as they already have and tell us that fracking is exacerbating our a planetary destruction and Shell and Exxon and a few other oil companies say, we can’t have that.
But if you repeal these regulations, that’s what’s going to happen. You’re going to hurt our profits. We don’t care about the destruction of the planet, so don’t take this story as oh oil companies finally care. They don’t care at all. They care about their profits. And if we start releasing more methane into the atmosphere, people are going to start asking some questions. You know, why is Miami underwater? Why are the ice caps melting so quickly? And companies like Shell and Exxon have been trying for decades to prevent people from asking those questions. But under these a new regulations or the lack of regulations, those questions are probably going to come a hell of a lot sooner than these oil companies were prepared to answer.