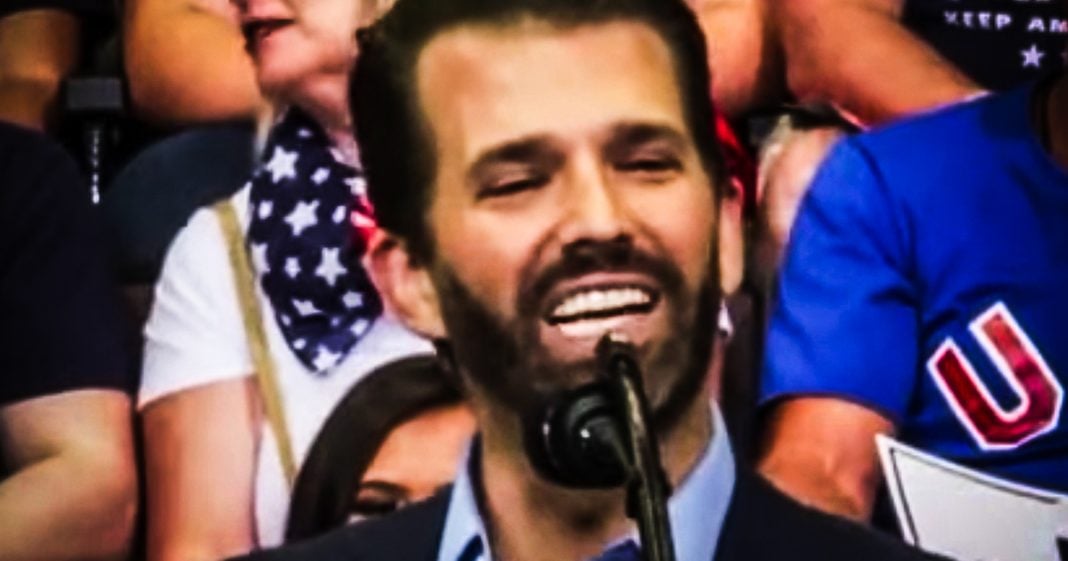 Donald Trump, Jr. appeared in Kentucky to host a rally for Governor Matt Bevin, but only a handful of people actually showed up to hear the President’s son. According to those in attendance, there were so few people that those who were there were told to “crowd” around the stage so that it looked more packed for pictures. Ring of Fire’s Farron Cousins explains why this is a bad sign for the “Trump political dynasty.”

You know, Donald Trump jr. has hinted at the fact that he may have a political career in his future once his father leaves office, but if what happened to him on Thursday is any indication that might be one of the shortest lived political careers in the United States. You see, yesterday Donald Trump jr and his girlfriend, former Fox News employee, Kimberly Guilfoyle, decided to head over to Kentucky where they met with Republican Governor Matt Bevin and held a rally. They held a rally at an arena that could hold 7,000 people. Less than 200 showed up. Donald Trump Jr was the headline. His girlfriend, Kimberly Guilfoyle, she was there with him talking to these people. Governor Matt Bevins was there. You’ve got a governor, you’ve got the son of a president, and you’ve got a former Fox News personality. You would think the three of them combined would not have trouble filling a 7,000 seat arena, but less than 200 people showed up because less than 200 people could still be conned, I guess.
And in fact, according to organizers at the event, they had to tell people to kind of move in closer, almost crowd the stage right up front so that it didn’t look like there was only a few dozen people there. And that may be, I guess when Donald Trump went up there, all he could see would be a crowd not noticing all the empty space behind them and off to the sides. But here’s the thing. This is not just a, nobody cares about Donald Trump jr story mostly that, but it’s not only that, it is, as I mentioned, a telltale sign that Donald Trump junior’s political future may not be as secure as he would like to think it is. As I have said repeatedly, Donald Trump jr lacks the charisma of his father, and don’t get me wrong, I hate his father. I’m not trying to compliment him here, but he does have this certain way about him that does attract low information American citizens.
They seem to like that Trump jr doesn’t, he doesn’t have that kind of charisma. He doesn’t have a, that personality, it seems fake when he does that. And the American people notice it when Donald Trump does it. It doesn’t seem fake. But for some reason people still buy into it and they like it. That’s still something I haven’t quite understood. But I do know that Trump jr doesn’t have it. I know that Ivanka doesn’t have it, and I know that Eric Trump doesn’t have it. I’ve never even heard baron speaks. So I can’t say what he does or does not have, but he seems to be a fairly decent kid and I don’t think he’s going to take after his father. But if Trump jr is serious about not only running for a political office in the future, but also campaigning for Republicans, the head of the 2020 election, he’s to have to get better at this.
Packing a 7,000 seat arena with less than 200 people isn’t exactly going to have, you know, win over the hearts of the American voters. It’s going to make you look weak. It’s going to make you look pathetic, and eventually that’s gonna trickle up to your father and you’re going to end up doing more damage to his campaign because nobody wants to see or hear you. And that is exactly what we saw in the very deep red state of Kentucky just yesterday. That is a bad sign for your future. And more importantly, it’s a pretty bad sign for Republicans all around as we head into 2020.