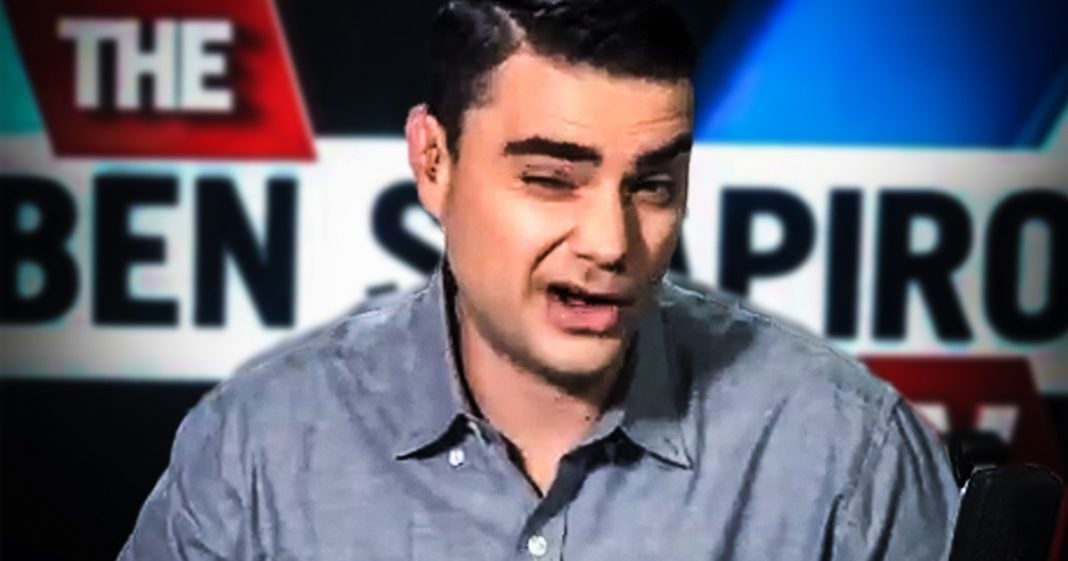 Conservative talker Ben Shapiro thinks that the idea of nuking a hurricane is “cool,” because he admits that sometimes he still thinks like a 13-year old boy. He also claims that nuking a hurricane, even though it won’t help, wouldn’t hurt anyone so what’s the big deal? Does he truly not understand radiation, trade winds, and nuclear fallout? There are countless ways a nuclear detonation could harm people even hundreds of miles away. Ring of Fire’s Farron Cousins discusses this.

Conservative talking head. A Ben Shapiro has finally weighed in on Donald Trump’s nuke. The hurricane suggestion and a Ben Shapiro doesn’t necessarily think it’s a horrible idea. Here’s how he explained it.
[You’re talking about this dumbest story that president Trump pointed to nuke hurricanes, which by the way, I don’t even care whether it does anything. It just sounds cool. I mean, what if there are sharks in the hurricanes? What if it’s a sharkNATO? What then guys? Have you thought about that? Just the idea. Anytime you’re talking about nuking a random thing that’s not really going to hurt anybody. I’ll admit the 13 year old blame me is kind of for it. In any case, it’s a dumb story. CNN decided to make it a big story and then they brought on April Ryan who is supposedly a reporter.]
Okay. There’s obviously several problems with what Ben said. They’re not the least of which is the speed with which he says it.
Just because you talk fast doesn’t mean you say good things. Ben. I think you need to understand that a little bit better. More importantly admitting that sometimes you think like a 13 year old boy doesn’t really do much to help your credibility and yeah, sure. Nuke in a hurricane. That sounds cool, right? Nobody’s gonna get hurt. You’re an idiot. I mean, seriously, folks, we are watching Ben Shapiro get dumber and dumber and dumber right before our very eyes. Every time one of these little clips get released. Now, make no mistake. I never thought this guy was intelligent at all. I’m still shocked that he was once referred to as part of the leader of the intellectual dark web. Here’s the thing that Ben doesn’t seem to understand. A nuclear explosion is not just like a bomb that just goes boom and then it’s done right? It releases radiation.
I mean there’s nuclear fallout from that and if you were to put all those things in a massive wind system, they don’t just fall to the ground and get buried and everybody can have fun. No, Ben, they get caught up in that wind system. It has. We’ve mentioned you essentially create a radiation filled hurricane, a nuclear hurricane, if you will, and what doesn’t get sucked up into the hurricane will catch a ride on the trade winds traveling hundreds upon hundreds of miles to other areas where the bomb wasn’t even near, but now these people are getting exposed to unhealthy amounts of radiation from your nuke the hurricane 13 year old boy idea and what doesn’t get sucked into the hurricane. What doesn’t make it into the Tradewinds is just going to fall right into the ocean there. Yeah. It’s not like we need the oceans for anything, right, Ben?
Those things aren’t important. We can just nuke the hell out of them. Ben Shapiro is correct about one thing. He does have the mindset of a 13 year old boy. He seems intellectually stunted at that age based on the things he says based on his of knowledge about the issues and based on his desire to desperately doing whatever it takes. Get Alexandria Ocasio-Cortez to notice him. Ben Shapiro, 100% is still that 13 year old boy making fun of the girl because he secretly has a little crush on her. That’s what he’s doing with AOC, thinking that it’s cool to nuke a hurricane because nobody’s going to get exposed to it because this guy never took the time. The few seconds really to look up any of the research that has actually been going on for years, telling us why this is such a deadly and dangerous idea. Ben Shapiro is a 13 year old boy who somehow got trapped in a 15 year old boys body.