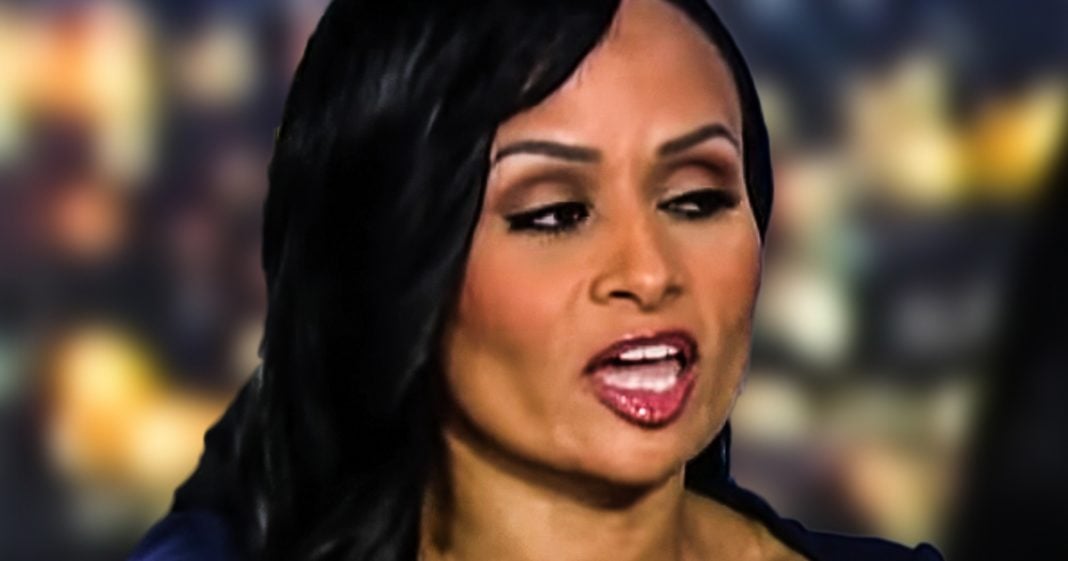 Trump 2020 campaign adviser Katrina Pierson is playing to Trump’s base by claiming that soon its going to be illegal to be white in this country. She tweeted out that dog whistle in response to a story about schools removing “all white male” accomplishment boards featuring scientists and Nobel Prize winners. Ring of Fire’s Farron Cousins discusses this.

A senior advisor to Donald Trump’s 2020 campaign. Katrina Pearson, who used to be on Fox News, she has some really sad news for white people here in the United States and she tweeted it out yesterday and here it is. Pretty soon it will be illegal to be white. I hope America is paying attention. Um, she tweeted this out in response to a story from NPR saying that schools and universities are gonna start taking down their all white male accomplishment, you know, boards and posters and panels and things like that. Basically showing, you know, all of these white male scientists who have won Nobel prizes or have made great contributions to science and they’re going to take it down because obviously white men are not the only people who have won Nobel prizes. They’re not the only people who’ve contributed to science yet. For some reason, they’re the only ones they like to put on these little posters and schools and universities and finally realized, you know what?
Yeah, we’re, we’re white washing scientific history here. Maybe we should add in the people of color, the women who have contributed greatly to science. Just as these white men have, but to Katrina Pearson, that’s an attack on white people. That’s the next step to making being white, completely illegal. And if you think that comment’s bad, then I encourage everyone and the link to the tweets and the description of this video. I encourage everyone to go through the comments to Katrina Pearson’s tweet, you know, for a while I thought, you know what, I’m going to read some of these out on the air. But then I realized if I were to say these things on the air, uh, they would probably take our channel down. Because they’re that bad because people agree with her and that’s why they feel empowered to say things like this. Katrina Pierson, uh, not even, not even white.
And yet here she is as an African American working for Donald Trump. She gets to go out there and make these claims and that’s why they use her. You know, she, she’s kind of their, their, their useful black friend who can go out and make these horrible, racist comments. But because she’s not white, they think that that’s okay. They think that this is how we’re supposed to do it, but that’s not how it works. Guess what, folks? Anybody, regardless of the color of their skin, can be a bigot. And Katrina Pearson just exhibited that perfectly with her little tweet because being white in the United States has never going to become illegal, right? It’s never going to become illegal. That is a racist dog whistle claim that used by Katrina Pearson to rile up her base. And if you go through those comments, you will see that it achieved its purpose. It riled them up, it got them angry, and that is the only card they have left to play as we approach the 2020 elections. So if you think this tweet is bad, you think those responses are bad. Buckle up folks, because it’s going to get so much worse as the Trump campaign gets even more desperate.