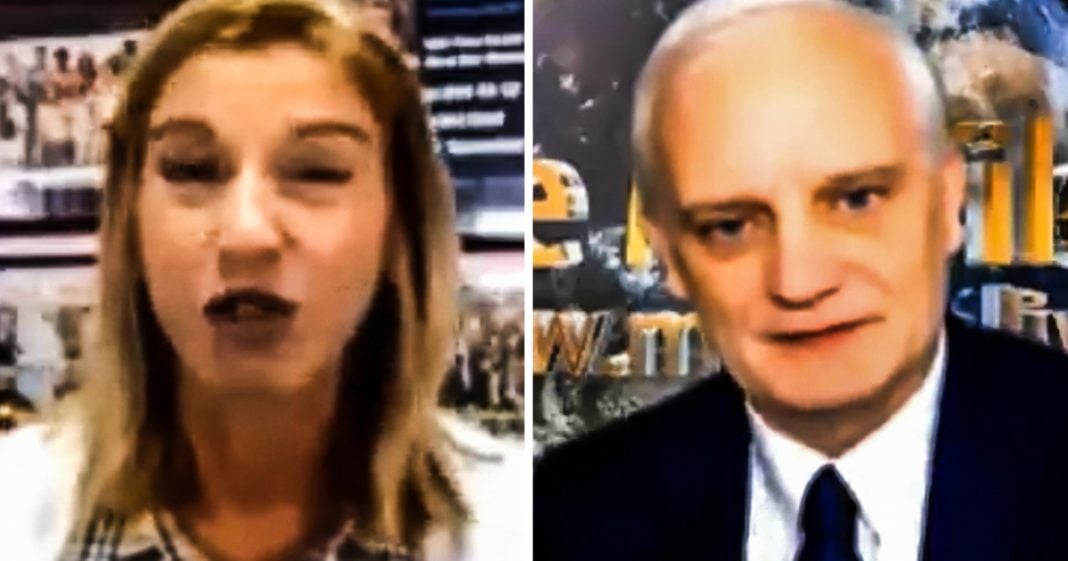 Tana Goertz, a Trump campaign adviser and the leader of Women For Trump, claimed in an interview this week that Donald Trump is so smart that it would make your head explode to understand how smart he really is. These supporters have been brainwashed into a cult, and they don’t even have the mental capacity to understand that. Ring of Fire’s Farron Cousins discusses this.

Earlier this week, a woman by the name of, uh, Tanya Gertz who happens to be an adviser for Donald Trump’s campaign. She is the leader of the women for Trump group. She did an interview with a right wing talker where she made some pretty outlandish claims, both about Donald Trump’s staggering intellect as well as Ivanka Trump. Here it is.
[Ivanka is amazing. What a champion for women. I had somebody asked me last night, who do you think at all these 20 Democrats would be the first female president? And I go, honey, ain’t gonna be one of them. It’ll be Ivanka Trump. And they went, what? I go, if there’s ever going to be a female president, it will be Ivanka Trump. I’m not saying she’s ever gonna run, but that woman, that woman would win just the same smart man. Same personality, same character, same sense of humor. He’s, he’s so intelligent. It would make your brain blow up if you even knew how smart this man was.]
So actually, he’s the same.
So I’ll address the Ivanka comments in just a moment. Uh, and thank you to right wing watch for posting this clip, by the way. But according to Ms Gertz here, um, Donald Trump is so smart that your puny human brain can’t even process how smart he is without exploding. That’s how smart this man who, uh, can’t string a sentence together to save his life. That’s how smart he is. The Co Fefi Guy, tariff man, super smart, very stable genius, right? Well, at least Ms Gertz here is not exhibiting any cult-like behavior, right? No. She has a godlike worship of Donald Trump, and that is 100% what members of a cult do with their leaders. This woman is not okay, or you could watch her in that clip. There is something, something happening inside her brain. It’s on an explosion. There are certainly things that aren’t firing off properly though.
And I would advise her to go get a cat scan as soon as possible to find out which neurons are not firing properly. Now, as for the Ivanka part, Ivanka Trump being the first female president here in the United States, yet that that’s literally never going to happen, you know? Yes, a lot of my predictions have not come to fruition, but hey, that’s what predictions are for. Right? But I can go ahead and tell you with pretty much utmost certainty that Ivanka Trump is not going to be president of the United States ever. Her husband might actually be the biggest reason why that will never happen. This man has more skeletons in his closet, has probably just as many lawsuits filed against him as Ivanka, his father has, and he doesn’t have that kind of personality that draws in the, uh, angry, rabid Republican base. And that is really the only reason Donald Trump was able to win his without that, he’s toast.
And that is exactly what would happen to Ivanka and Jared Cushner. But this whole Trump colt here, which ms Gertz here exhibited beautifully, that is a very real danger to the United States here. That is a threat. Ms Gertz was not out there giving, talking points. She was exhibiting symptoms that we have to take very seriously. Donald Trump has managed to brainwash a significant portion of the United States population. And I don’t know that we can save these people. I don’t know that we can help these people. I don’t know that we can snap them out of whatever trance he has put them in and make them, once again, productive members of society. It is a sickness. It is a disease that Donald Trump is spreading amongst his most rabid followers. And again, I’m not saying all Trump followers or members of this cult, but people like Ms Gurtz, some of these people driving around with 800 Donald Trump bumper stickers. Yeah, that’s not, that’s not normal. And these people seriously need some help. Donald Trump is not a savior. Donald Trump is not a good president. Donald Trump is not even a good human being. And these people need to snap out of whatever stupor it is that they’re in, open their eyes and see for themselves that this man has been conning them since day one.