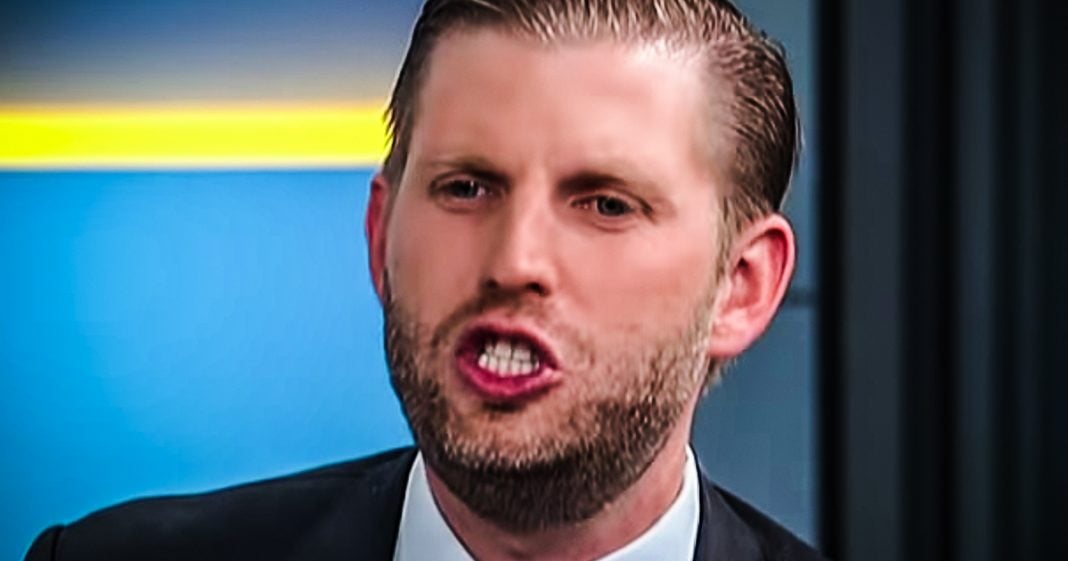 MSNBC’s Lawrence O’Donnell is in trouble after claiming without evidence that Russians co-signed Donald Trump’s loans with Deutsche Bank. It turns out that those claims were never verified, and they were made by someone who hadn’t seen the banking records. The Trump family isn’t happy about this, especially Eric Trump, and he said on Twitter that he’ll be suing O’Donnell and MSNBC for their claims. Ring of Fire’s Farron Cousins discusses this.

So yesterday Lawrence O’Donnell from MSNBC announced that, oops, that story he reported on about Donald Trump’s Deutsche bank records showing that Russian oligarchs had co-signed some of his loans. Uh, he really can’t verify that in any way. And the person who told him told him that that had happened actually hadn’t ever seen the bank records. So Lawrence O’Donnell had to issue a retraction. And because of that, we also hear it ring of fire have to issue a retraction. As I did mention that in the video yesterday where we talked about Deutsche Bank being ready to hand over the bank records. Apparently that claim cannot at this point be substantiated. So please disregard that statement. I do apologize for that. I’m very disappointed in myself for reporting that without being able to verify that that was shoddy work and I am sorry. So again, please disregard that statement however I gotta add a
However here, do we know that that didn’t happen? I mean, I don’t want to double down on something we can’t verify, but it seems to me there’s a very easy way for the Trump family to come out and say, nope, this is a lie. MSNBC just made it up and that would be to release the records or let Congress get their hands on them like they’ve been trying to do, but when you continually hide your stuff, it only leads to speculation and that’s what happened with this lazy MSNBC story that again, unfortunately a lot of us saw reported on and now we also look foolish. But here’s the thing, it’s not over yet because Eric Trump tweeted out the following yesterday. This was a reckless attempt to slander our family and smear a great company. Apologies are not enough. When the true intent was solely to damage and cause harm as a company, we will be taking legal action.
This unethical behavior has to stop. Eric, this isn’t a good idea, buddy. This isn’t the kind of fight you want to get involved in. This isn’t a lawsuit that your company really should be pursuing. You know why? Because perhaps those banking records do not show any Russian oligarch co-signers. That’s really not the biggest prize. That was just an aside that was like, hmm, that’s weird. So if that’s not true, great, except their apologies and move on. Because if you go forward with a lawsuit against Lawrence O’Donnell, MSNBC, or anybody else who talked about it, they get to get those documents. They get to get your bank records, they get to get your dad’s tax returns, they get to get everything in the discovery process and they’re going to find out a lot more things that you wished they hadn’t found out. So if that’s a very big, if you and your family are the honest ones in this particular story, again, except the apology and move on, you know, hammer it on Twitter for a few weeks.
I know your dad will regardless, but he’s also lied about plenty of things that later turned out to be completely true. So again, even though MSNBC cannot verify or substantiate the claim that they made, we technically don’t even know yet if they are actually lying about it. This could still end up being true. But they were so desperate to paint this as another Russia story that they ran with it without verifying in our video is something we kind of mentioned. As an aside, the big thing was getting the bank records and finding out where this guy’s hiding all his money, where it’s coming from, and whether or not he has any conflicts of interest. MSNBC wanted to go another route and made the Russia thing their entire focus. But again, Eric, probably an ill-advised lawsuit on your behalf because even if MSNBC lied about this, there is going to be plenty of other information that your lawyers would be forced to hand over to MSNBC’s lawyers, and that information is certainly stuff I’m willing to bet your family doesn’t want getting out because after all, they’ve been fighting tooth and nail to prevent anyone in this country from getting their hands on it.
So maybe best to just take the loss on this one, accept the apology, and move on with your life before things get so much worse for you.