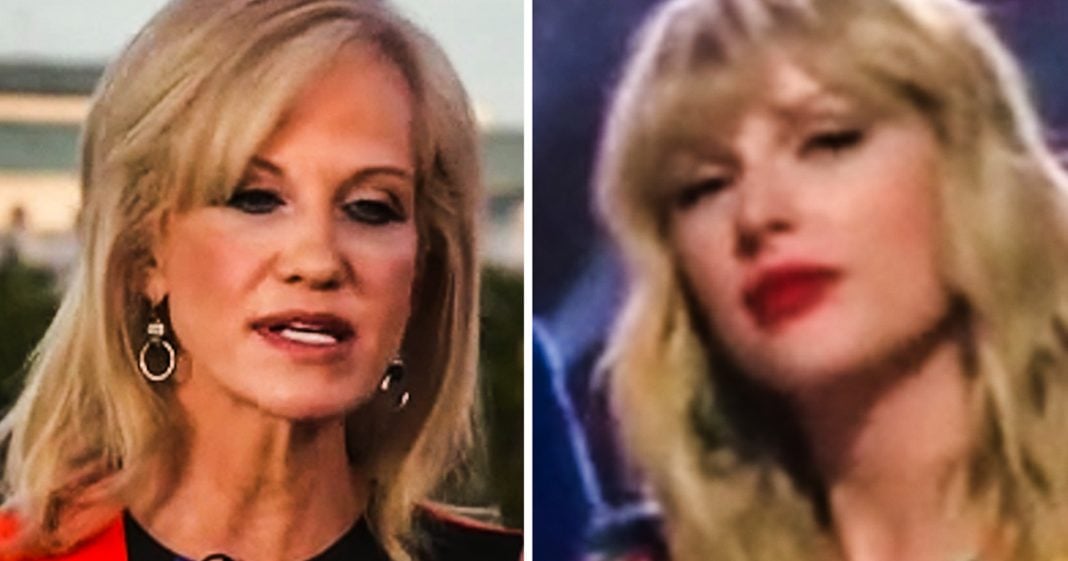 Cringe alert! Kellyanne Conway attempted to sing a few lines from Taylor Swift’s new song live on Fox News, shortly after attacking the singer for becoming “political.” Conway couldn’t even answer basic questions about why Taylor Swift is supporting LGBTQ equality, and instead resorted to personal attacks against the singer. Ring of Fire’s Farron Cousins discusses this.

You know, you gotta hand it to Kellyanne Conway a little bit, right? I mean, she absolutely is a fighter. I, she’s not very good at it. And she, she fights very dirty and she picks fights with the people that she has no chance of possibly defeating, but she is a fighter. And earlier this week she decided that her newest fight was going to be with Taylor Swift because Taylor Swift, believe it or not, folks had the audacity to tell people to sign a petition urging the White House to support LGBTQ civil rights. I mean, really like how awful is that your Taylor Swift believes that everybody, regardless of sexuality should have equal protection under the law. But apparently that was enough to set Kellyanne Conway off and she went off in this incredibly bizarre segment on Fox News with Martha MacCallum. Here it is.

Taylor Swift:                 At the end of this video there was a petition and there still is a petition for the Equality Act, but now has half a million signatures which, which is five times the amount that it would need to warrant a response from the White House.

Kellyanne Conway:         I would to just survey the audience if they know what that even is, what the Equality Act is and isn’t. Um, but she’s welcome to her opinion. I will tell you there’s a lot of poison pills in it.

Kellyanne Conway:         Right. And so I actually liked the new Taylor Swift song that is called, You Need to Calm Down. I can sing it for you. Anyway, she says, if you, if you say it on the street, that’s a knockout. If you put it in a tweet, that’s a cop out. I love that. That’s like, that basically is Washington in a nutshell. But she’s walking her opinion. I think that when Hollywood and singers and all go political, it sounds in the moment like it’s very popular and we’ve seen so many times where it backfires and it blows up. Uh, but she’s also somebody who went up against president Trump, head-to-head in the United States Senate race in Tennessee and lost handling Marsha Blackburns, our United States senator from Tennessee.

Kellyanne Conway:         The president and the White House support equality. We don’t support pieces of legislation that have poison pills in it that can harm other people.

You know, I really could have very easily gone the rest of my life without ever having to hear Kellyanne Conway attempt to sing. But there it is. So that’s a thing that we’ve all seen now. But I think it’s funny how in that clip, first and foremost, before she even responds to anything, Kellyanne Conway insults, Taylor Swift’s audience, you know, basically you’re all too stupid to even know what she’s talking about. That’s how Kellyanne Conway fights, you know, rather than address the issue, rather than talk about what Swift is talking about, Kellyanne Conway immediately resorts to these childish insults of people who weren’t even in the fight here. Like that’s what’s so messed up about it. That audience, they weren’t the ones going out there saying, oh, we should support this. And even if they had like that, that’s a good thing. But Kellyanne Conway immediately starts by going after, not Swift, but the VMA audience itself claiming that they in fact are the stupid ones.

Forgetting for a moment that this is the woman who has invented phony attacks, invented the phrase alternative facts so that she can lie without, you know, calling it a lie. What Taylor Swift is doing here is a good thing. You know, sometimes, yeah, we see celebrities go out there and they get involved in politics in sure. Sometimes they fail. Sometimes it’s, you know, a little ridiculous. There’s nothing wrong with what Taylor Swift is doing here right now. This is something good. This is something that needs to happen. This is something that should have happened in this country decades ago, and believe it or not, folks, that’s actually something Donald Trump said before he was elected that he was absolutely going to work with. He was going to be the best president for LGBTQ rights ever. They loved him, he said, and he was going to have their back in the White House.

Instead, he’s turned his back on them. He has enacted policies directed at discriminating against this community. He has been awful. He has just like in so many other facets of his life, proven that he hates these people, that he does not like them, and that he will not protect them. And Kellyanne Conway couldn’t come up with a single good reason as to why the president has not actually fulfilled this campaign promise he made. And instead again, attack Taylor Swift said, oh, she went head to head against Trump in Tennessee for the senate race. No, Taylor Swift was not running for Senate in Tennessee versus Donald Trump. They each endorsed a person. Trump’s person one, because it’s Tennessee. You want to go back and look at all the other people Trump endorsed in 2018 and even before that, that lost cause that’s not a very good record for the president, Kellyanne, and it’s really overall not a good measure of success. Anyway, Taylor finally jumped into politics, decided she was going to back somebody. It didn’t work out so well for the first time. Maybe that’ll be different in the near future. Hopefully that’ll be different in the near future, but you’re picking a fight with somebody and insulting millions of people in this country just because you and your boss’ administration don’t want to treat every human being in this country as if they were equal. That’s a losing fight no matter where you’re arguing from. Kellyanne.