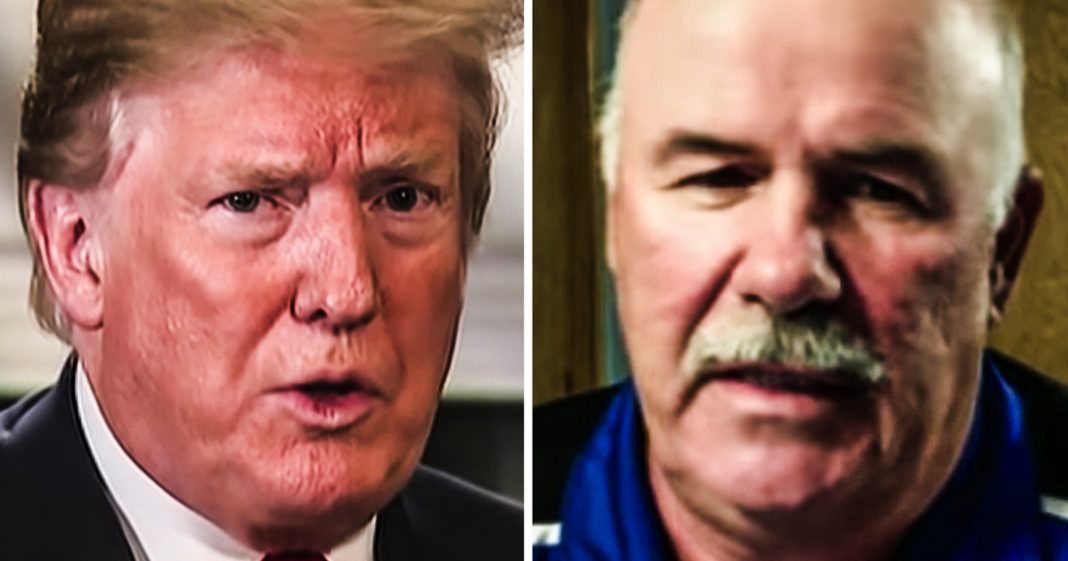 A farmer in North Dakota had some unkind words to offer for farmers across the country who still support the President – You are kind of crazy. And he’s not wrong. Trump has hurt American farmers harder than possibly any other industry, and to continue to support him as your livelihood is single-handedly destroyed by him does indicate some kind of defect. Ring of Fire’s Farron Cousins discusses this.

Earlier this week, CNN decided to talk to a farmer from North Dakota who has been severely impacted by Donald Trump’s trade wars. This man, a man by the name of Bob Kuylen, who has lost $400,000 from his farm because of Donald Trump’s activities. This man has been farming in the United States for 40 years, so his entire adult life, this is what he’s done. And CNN wanted to talk to them and find out how the trade wars affected him. And as I just mentioned, he’s, he’s lost almost half a million dollars so far from the trade war, but he is not just out there complaining, I’m losing money. This is horrible. He admits he did not vote for Donald Trump, nor did he support him in 2016 but he says other farmers did, but he goes on to say this.

“I mean, some of them are trying to be faithful, they made that decision and voted for him but I would have to say in the back of their minds they are just not very happy right now.”

He makes a brilliant point here. At this point, the plight of the American farmer can be placed squarely upon the shoulders of Donald Trump. This trade war was 100% his decision, it did not go through the house. It did not go through the Senate. It didn’t have to be voted on by a court. This was Donald Trump doing this on his own. He owns all of this. This was his decision and his decision is leading farmers to record numbers of bankruptcies, rates of bankruptcy in the farming industry. We haven’t seen in over a decade at this point, folks, and it’s 100% because of Donald Trump’s decision. So anyone in that industry who can still look at this man and say, that’s my guy. Yes, I’ve lost half a million dollars. I’ve lost tens of thousands of dollars. I’m actually not even a farmer anymore because I lost everything. If you look at Donald Trump and say, I still support him, then you got what you deserved.

You know, I think it was the first time I’ve ever actually said that you got what you deserved. I hate thinking like that. I hate saying those words. I don’t like that. But at this point, it’s the truth. This man single-handedly destroyed your way of life. How can you support that? This isn’t going to help you in the long run. It’s not going to make things better for you. He’s out there lying about talking to China. China has to come out and say, yeah, that’s not true. It didn’t happen. He has no intention of ending this trade war because he didn’t know what he was getting into when he doesn’t know how to end it. Things for American farmers are going to get so much worse and yes, some of do still support him and I’m sure there’s probably even some of them you can find that would say that the trade war is actually Democrats fault, but the truth is that this is a decision that is 100% on the shoulders of Donald Trump. He doesn’t care what these people are going through. He tried to throw a couple of billion dollars in subsidies out there to rebuy their votes for 2020 but if Mr. Kuylen here is to be believed, it’s simply isn’t enough and hopefully it’s not going to work.