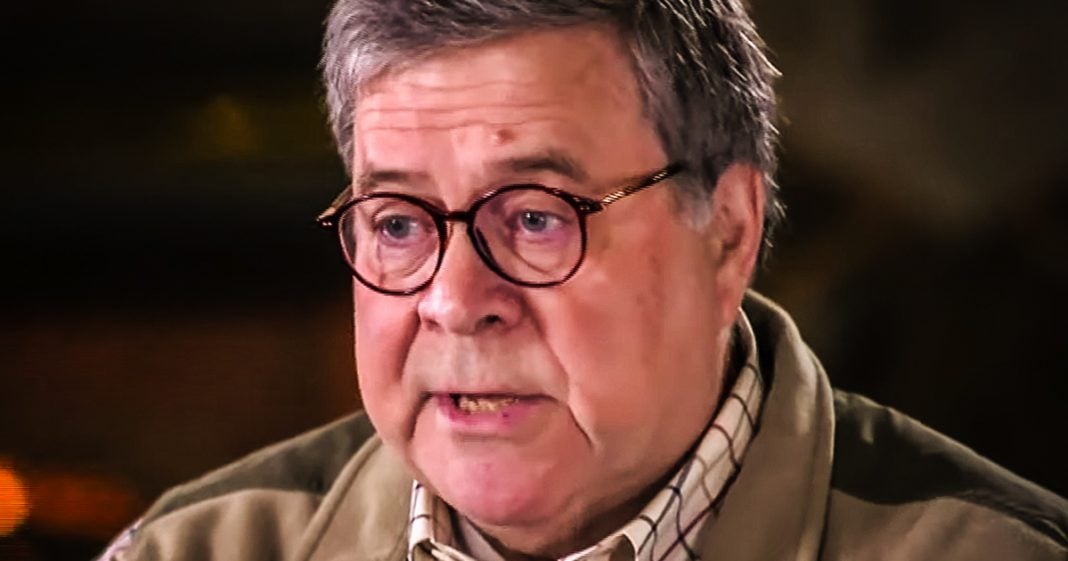 Attorney General William Barr has made a $30,000 deposit to rent out party space at Donald Trump’s DC hotel in order to throw a holiday party for roughly 200 people. This is a very clear conflict of interest for both Barr and the President, but the White House doesn’t seem to mind that the AG is essentially putting cash in Trump’s pocket. Ring of Fire’s Farron Cousins discusses this.

When most people look at Attorney General, William Barr, I’m sure you think the same thing I do in that this is a guy who knows how to party, right? That’s William Barr, Bill Barr, Billy Barr, attorney general. Well, according to new reports, Bill Barr is spinning $30,000 possibly even more, to throw one kickass holiday bash for 200 family members and he’s doing it at Donald Trump’s DC hotel. So that’s $30,000 going right back into the pocket of the president of the United States. Now, Bill Barr’s Christmas bash that will be taking place at Donald Trump’s DC hotel on December 8th. I’m in case anybody wants to show up outside and protest or draw attention to the fact that this is a massive violation of the emoluments clause for the president of the United States. And it represents a huge conflict of interest for Attorney General William Barr. Here’s what’s happening right now. For those who haven’t been paying attention to the court system in multiple different lawsuits and multiple different, uh, jurisdictions throughout this country.

The DOJ is actually representing Donald Trump and his business is trying to fight off a lot of these emoluments clause lawsuits. So Bill Barr, the head of the DOJ going and dropping 30 grand on a party at Trump’s hotel that he is also representing in court. That’s a pretty big conflict of interest, not just for his role as DOJ, but for their role as his attorneys. At this point. Bill would either need to recuse his department from the lawsuits or recuse himself from his own party, but that’s what needs to happen. And that’s just on the DOJ side. On the obvious presidency side, you have Donald Trump who is once again going to be in violation of a, you know, any kind of emoluments clause, you know, accepting gifts even from US officials here because this is all going back into his pocket. This is his money now, unfortunately, uh, according to the DOJ, yeah, they looked at all the rules.

There’s nothing, nothing about this breaks the rules. And even former, uh, ethics officials from the Obama Administration say, listen, it’s not illegal. It is hugely unethical though. So maybe this isn’t a monument’s clause violation after all Bill Barr’s not you know, foreign official, but it does stink to high heaven. And William Barr is doing this because he wants to curry favor with the president of the United States. Now he claims actually an unnamed DOJ official claims that he went to other hotels first to throw his a family Christmas party bash. But this one was full. This one was full. This one’s full. The only one that wasn’t all booked up. Who’s Donald Trump’s DC hotel. Now the Washington Post then tried to reach out to some of these other hotels. They would not respond because of confidentiality issues. But this is William Barr’s excuse. And again, maybe it’s not illegal for him to do this, but I think on the, on the court side of it, that his DOJ is out there representing Donald Trump in court. Yeah. This presents a pretty massive conflict of interest. It’s going to present a conflict of interest anytime William Barr goes out there and defends the president at this point, because he’s also padding his own pockets. But that is why Donald Trump wanted to be president to begin with. He knew he was going to make a lot of money and he’s been making a lot of money, and yet you still see these idiot conservatives out there. Charlie Kirk was tweeting about it the other day, that Donald Trump’s such a good guy for donating his salary. Kirk actually said he might be the only president who loses money by being president.

Charlie, you truly are a great a moron because Donald Trump has pocketing hundreds of thousands of dollars every month from people wanting to go to his little golf clubs and his hotels just because they’re die hard Trump supporters. He’s making a hell of a lot more than that $400,000 a year presidential salary, and Bill Barr just put another 30 grand on top of that.