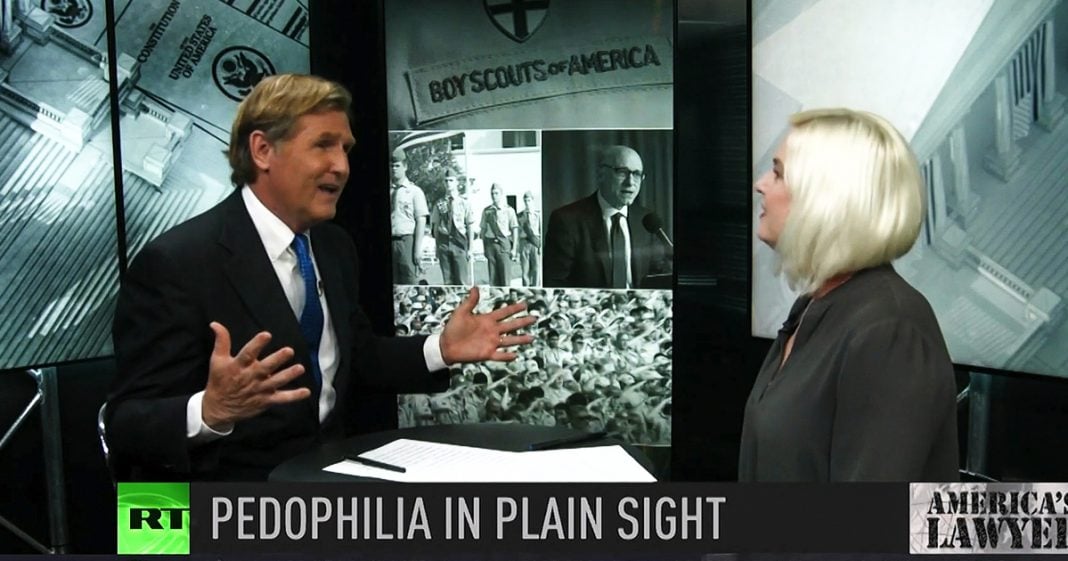 Via America’s Lawyer: Mike Papantonio is joined by legal journalist Mollye Barrows to bust open the “Perversion Files” kept secret by the Boy Scouts of America, which document HUNDREDS of scout leaders and staff accused of child sex abuses dating back to the 1940’s. The recent rollout of the Child Victims Act in New York has prompted scores of victims to file lawsuits against organizations like the Boy Scouts and the Catholic Church. Are we finally reaching a turning point for survivors of sexual abuse?

Mike Papantonio:             The boy scouts have long been a pinnacle of American youth culture, but the organization is now engulfed in a media firestorm concerning its cover up of thousands of cases of sex abuse amongst scout leaders and volunteers. Legal journalist Mollye Barrows joins us now to break it down. Mollye, just how rampant is this? Is this another, is this, is this media hysteria that we so often see?

Mollye Barrows:                It’s, it’s very rampant. Similar to what you saw with the Catholic church. You heard accusations for years and then as they looked into it they realized that it spanned decades and that’s what you’re seeing with the boy scouts. This particular group of attorneys called Abused In Scouting formed in February and they began their own investigation looking into accusations that spanned eight decades. And so it went back like from 1944 all the way to the present time and they found 350 previously unknown adult scoutmasters and members who are alleged abusers. And so there is just a wave of lawsuits that’s coming out of Philadelphia where one particular lawsuit was filed earlier this month and that particular group of attorneys said that they’ve got literally dozens and dozens and dozens of other accusations of, of people who said that they were molested and abused by scoutmasters over many years.

Mike Papantonio:             They’re afraid that if they disclose what’s going on that’s going to hurt the image of the scouts, so they covered up at the highest levels.

Mike Papantonio:             You know these, this, there’s no difference here. I mean it, it just has played itself out time and time. What, what I find amazing about this case is that it’s taken so long to surface. I remember rumblings about it about maybe 10 years ago and then it kind of disappeared and then when I went to take, took a look, it disappeared because there was money that exchanged hands to make it disappear.

Mike Papantonio:             How old are these accusers and what, what types of abuses are they saying they suffered?

Mollye Barrows:                You know, going, and I haven’t seen every complaint for each of the victims, alleged victims that have filed, but the one that this particular group Abused In Scouting represented in the first lawsuit that was filed in the Philadelphia area. He said he was 12 or 13 when the abuse started. He said he was abused dozens of times by this particular scoutmaster. And this seems to mirror the accusations that are coming from these kids, that they were left vulnerable to these predators because the, the organization did little to vet volunteers or to vet these scoutmasters or even when they were made aware of complaints, they basically swept them under the rug or did what they could to hide these accusations. So the accusations are essentially what you hear in many accusations of child molestation, that these kids were groomed. That these people sought after the children that were going to be the easiest to abuse, if you will. They created a relationship with the vulnerable.

Mike Papantonio:             It’s just like the, the, the Catholic church had something similar. Who are our, who are our pervert priests? How do we make them go away? How can we hide them?

Mollye Barrows:                Well, it’s so interesting and it goes back again to this investigation that these attorneys did. And I think, you know, and I don’t know this, but in light of what happened with the investigation to the Catholic Church and numerous other organizations that covered up perpetual systematic abuse, these perversion files are essentially where the Boy Scouts of America, according to these particular victims and according to this organization that looked into it, where they filed away these accusations of this scoutmaster did this and this year and this person did that and this year. And these allegations were always against children and this particular expert that this group hired to look into this found some almost 8,000 Boy Scout sexual misconduct perpetrators and over 12,000 victims. And this is between 1944 in 2016.

So it’s again, it’s also during this time period when people don’t want to come forward and talk about it. That’s why so many of these victims are so much older. And again, you have laws that were about the statute of limitations that prevented them from being able to come forward. So I think, you know, in the overall context, it’s made it easier to come forward with these allegations. People are willing to listen and then maybe potentially adjust the laws accordingly.

Mike Papantonio:             By the way, I saw an article about this maybe six months ago and it was talking about the notion, it’s almost like the Catholic set, that they’re rule followers.

Mollye Barrows:                And I, and, and it’s within me enough to say I’m going to distance myself from this person. But then if you have a child that maybe has a troubled background or even if they don’t, maybe their personality makeup is just such that they’re not boat rockers.

Mollye Barrows:                They don’t want to go against or rebel against authority and so they become victims of these guys. But the other interesting part is that, basically New York has passed a law that allows a one year window for some of these older victims to be able to present their charges. And of course, that leads to the financial impact that it’s going to have against the organizations like the Catholic Church and the Boy Scouts of America.