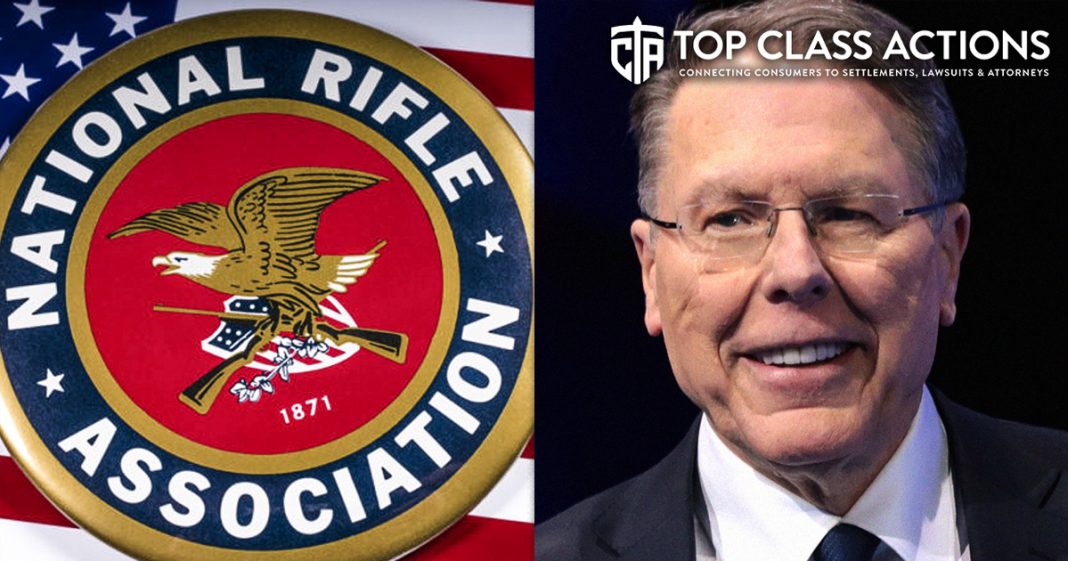 A longtime donor to the National Rifle Association (NRA) has filed a class action lawsuit against the organization claiming that they mislead him in how they were spending his contributions. Plaintiff David Dell’Aquila claims that the NRA, in their solicitations for money, said that they would be using donations towards gun safety education, in the promotion of shooting sports and hunter safety, as well as protecting the rights of gun owners in the United States. The NRA class action lawsuit alleges that the NRA has been using the donations toward causes that are contrary to the organization’s core mission. Ring of Fire’s Farron Cousins discusses this with Scott Hardy from Top Class Actions.

Farron Cousins:                  With all the talk about gun control recently, the NRA typically gets brought up in those conversations and something that people need to understand is that the average member of the NRA is not the leadership of the NRA. The average NRA member actually does support tighter regulations on guns. They support enhanced background checks. All of the things that non NRA members are also saying they support. The bad people happen to be the ones sitting at the top. And a new class action lawsuit is actually challenging that leadership for their mismanagement of the funds that members have been sending to the organization.

Joining me now to talk about this is Scott Hardy with Top Class Actions. Scott, you know, a couple months ago we saw the headlines, Wayne LaPierre, former head of the NRA had just been spending money left and right money that wasn’t his, but using it for him personally and then not reporting it to the IRS. Tell us why this has got NRA members so riled up. Rightfully so, by the way.

Scott Hardy:                          Right, well you have the average NRA member that is, you know, paying their dues, they’re spending and they’re sending in their $50 or $100 a year. They’re trying to support their second amendment right. And they think that that money is going to helping support their, their right to, to own a firearm. But unfortunately as we’re finding out, we’ve really found out over the past couple of years is that that money that the average NRA supporter is sending in very likely isn’t going to help educate kids on the proper and safe use of firearms. It’s not going out there to help educate folks on how to properly hunt and safely hunt and, you know, really support the conservation side of our environment that hunters are out there for.

No, a lot of this money is going to the leadership and supporting a lavish lifestyle for the leadership. And then of course you have all of this money that is also coming from the, essentially the lobbyist of the NRA that are saying, hey, you, you know, take that money and fight for us. And they’re shoveling a lot of money towards the NRA and the leadership as well. But what really kind of keyed me off was, you know, I’ll confess here, I was a member of the NRA about 15 years ago, 10, 15 years ago. And I was confused because I thought I paid my membership dues into the NRA to help these things, help kids learn how to hunt safely, help educate kids on, on proper and safe use of firearms.

That’s what I thought this was for. But then I kept getting these, more notices saying, hey, give this money to the NRA institutional side of it. And I went, what? The institutional legislation side of it? I thought, I thought I was giving this money to the NRA to go ahead and fight for my rights. And then I started seeing some of these reports popping out saying that, oh wow, you know, we’re paying the CEO more than half a million dollars a year, sheesh. Oh, and that CEO is, according to this, getting free suits for hundreds of thousands of dollars.

Oh, the NRA is paying their lawyers a couple of million dollars a month. And I said, where is this for the grassroots NRA supporter, how is their money actually helping them? How is, how is the average NRA’s contributor’s cash going to supporting their goal of educating and just helping the average American? And from what I’ve saw and from what this class action is alleging, that’s just not happening.

Farron Cousins:                  And what’s interesting too is, you know, you also had the ill-fated NRA TV that recently shutdown. They’re paying those hosts countless dollars every year to not even talk about gun issues. They’re out there just talking about political issues going after their political opponents and they’re not actually doing anything involving what you said here, teaching people how to be safe with firearms. I mean that, that is actually part of the NRA’s platform. That is what we allegedly do. But they abandoned that years ago. This is not what it is.

The NRA has become pretty much a completely political lobbyist organization today. It does not represent the interest of average gun owners anymore. And unfortunately you still have tons of people who do pay these dues. Not because they agree with the leadership, but because they say, listen, I like the idea that they’ve got here and I am assuming that this is where the money is going.

But again, it’s, it’s not. Not just to, you know, the former CEO’s lavish lifestyle, but all these other projects, the lawyers, the political projects, their lobbyists, it’s not going to anything that the NRA claims that it’s going to here. And I think a, a lot of NRA members out there would be very unhappy to know about this because they may not follow all the news about the NRA all day, every day. But these are things that have been out there and a lot of people haven’t necessarily paid attention.

And hopefully we can bring more attention to this so people understand what they’re funding. To me, it almost is reminiscent of like a, a mega church pastor. Right? We’ve seen a lot of those guys in the news recently. Send me your money because you, you believe in the words I’m saying you, you believe in this religion that I’ve got, but really I’m gonna use this money to go buy myself a couple more private jets. I want this big old mansion and Wayne LaPierre was, was no different when he was running the NRA.

We see that, as you said, with churches and other nonprofits where the leadership is just taking an immense amount of money to live these lavish lifestyles, and they’re depending on their folks to actually support this. And it’s like, you know, no, use this money for what people are donating. Use this money for what people are counting on it for. Don’t use it to buy yourself a new pair of Gucci loafers.

Farron Cousins:                  Absolutely, and I think they’ve got a pretty solid case with this one. For more information about this issue, please follow the link in the description of this video, head over to Top Class Actions and make sure you sign up for their weekly newsletter. Absolutely one of the best resources out there for consumers, Scott Hardy, Top Class Actions. Thank you very much for telling us this story today.