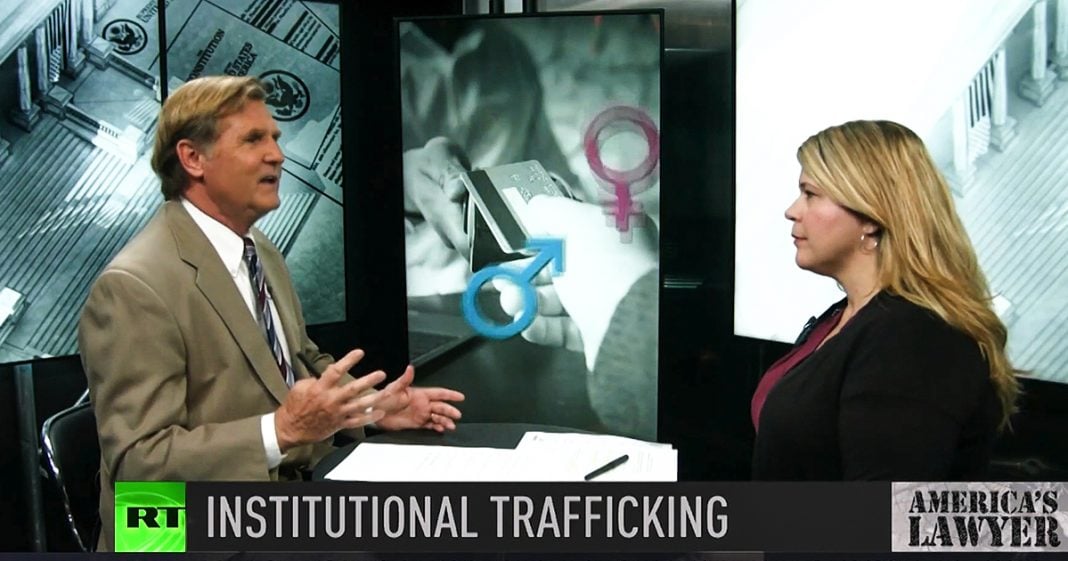 Via America’s Lawyer: Mike Papantonio is joined by attorney Kim Adams to break down the goal of “End Child Prostitution and Trafficking” (ECPAT), an organization that shines a spotlight on institutions like the hospitality industry for facilitating and even brokering the sexual exploitation of workers for the sake of profit.

Mike Papantonio:             Human traffickers aren’t able to operate without corporations covering for them. Some of these companies are accomplices while others simply turn a blind eye to the abuse that’s happening right in front of them. But either way, these companies won’t be able to hide for much longer. Joining me and talk about this is attorney Kim Adams who is on all their trail with Carissa. You Know, Kim, I love what’s happening with this lawsuit. I like the players, the experiences being brought to this national case. I want to talk about ECPAT. What is ECPAT and why is it important to this case?

Mike Papantonio:             Okay. So you’ve got industry that, you know, it’s really a funny thing. I mean, it’s a great thing. But since we filed this lawsuit since you and Carissa filed the lawsuit up in New York, oh, excuse me, up in Ohio, it’s almost like all of a sudden everybody’s paying attention.

Kim Adams:                           I think they’ve had a wake up call. They’re again, pledging to make right on their promises to try to put a stop to trafficking. They’re trying to let the public know we’re doing training programs, we’re gonna let everyone know that trafficking doesn’t exist in our hotels. Something they should’ve been doing when they made that pledge 20 years ago and they have that have not done. So, I think we’re seeing the public communication again, the, hopefully not empty pledges, but what has been tried and true of empty pledges. And so I think that we’re hopefully going to see some changes there.

Mike Papantonio:             Made it look like, oh man, we’re all in. We’re, you know, we’re so sorry about what we’ve done. But they made billions and billions of dollars for decades knowing exactly what they were doing. I don’t see any difference here. I mean, I, God bless them. I’m glad the hotels are saying we can do better. If you go through an airport nowadays, everybody is talking about if you see trafficking, that didn’t just happen.

Mike Papantonio:             They understood they’re a target. Matter of fact, Atlanta is a great example. You know, the, the trafficking takes place in Atlanta right there at that hotel. People come from all over the world, converge in Atlanta, stay a few hours with trafficked individuals and then go back home.

Mike Papantonio:             So they’ve known this has been going on a long time. What are the claims, what are these claims that you’re bringing and who can bring these kinds of claims? You and Carissa are all out front on this.

Kim Adams:                           Right, so our claim is, is centered around the trafficking victim protections act. We’ve had this act for a long time, it’s gone through a number of modifications. It’s important though because it allows our survivors to finally have a voice against businesses and people who are benefiting financially from their trafficking. One of the common mis-conceptions by our survivors is that they feel like they’ve got to reopen this wound against their trafficker, and that’s not what we’re after here. We’re after, we’re following the money. We want to see real change and we want our survivors to have a real voice against these businesses who, as you’ve already alluded to, have made millions and millions of dollars off of their suffering for years, and that’s what we’re doing.

Mike Papantonio:             She’s able to get on the telephone and say, I went through this and the thing to do so nobody else goes through it is engage yourself in a lawsuit and right now she’s traveling all over the country talking to, some of these stories that I’m hearing are the most horrendous you, you, you take the calls every day you take.

Kim Adams:                           We hear stories of victims who said, I wish that Doorman, that clerk at the desk, that manager who was getting a kickback, that trafficker who was getting a discount at that hotel, that hospitality worker who came in and cleaned my room and saw the evidence of trafficking all over that room, I wish just one of those people would have taken notice of what was going on. And you’re absolutely right, Carissa comes in with such a degree of knowledge and skill and compassion and trust, and I think that that’s what our, our survivors are finally realizing we are here for the right reasons. Our first priority is to see change. Our second priority is to make sure that the public’s perception of these victims is no longer a victim shaming world. That you hear them and you listen to them first, and then our survivors will tell you last on their list is some kind of recovery for the years of pain and torture they went through.