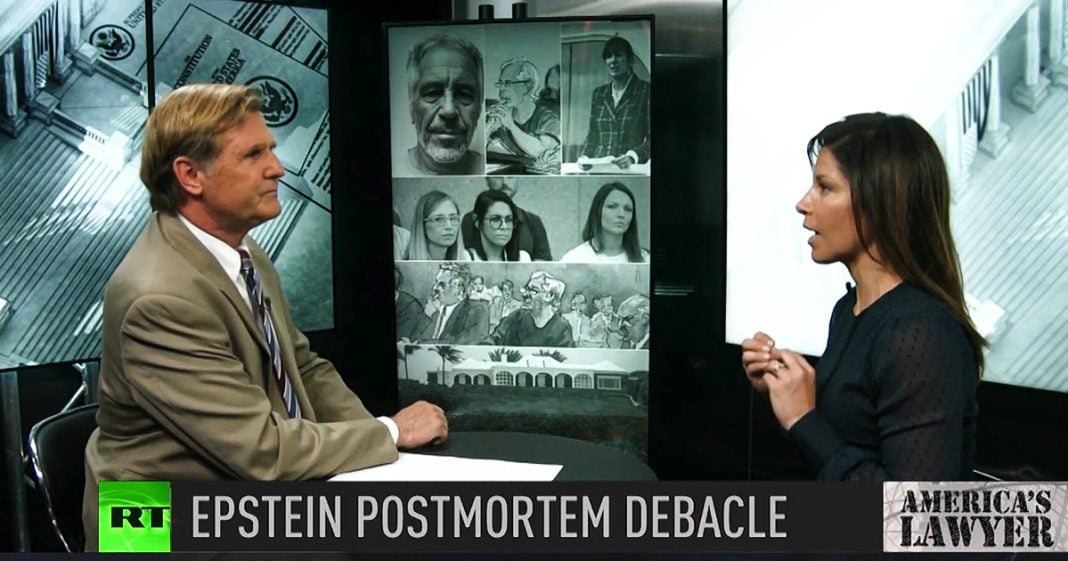 Via America’s Lawyer: Mike Papantonio sits down with author and attorney Carissa Phelps to discuss what obstacles Jeffrey Epstein’s sudden death brings to the case of his accusers. Having survived a sex trafficking ring herself at a young age, Carissa now points to activism taken across the country against sexual abusers and traffickers, arguing that Epstein’s victims won’t be silenced in their pursuit for justice among the powerful and famous connected with the late financier.

Mike Papantonio:             Jeffrey Epstein’s death might be the end of his criminal trial, but the civil cases against him are still moving forward against his estate. And Without Epstein, it might be easier for his victims to finally get some justice. But before that happens, we still have to understand how Epstein recruited his victims. Joining me to talk about this is Carissa Phelps, an attorney and advocate, author who’s been a lot working on this issue for a very long time. Thanks for your work to begin with, Carissa. Let’s start with the obvious. Okay. It’s, I, I’ve done a couple of shows in various media, and the question always comes down to, it’s almost as if people believe because Epstein is now dead, that everything stops. Nothing’s further from the truth is it?

Mike Papantonio:             Yeah. Well, here’s the point. I mean, you know, okay, so, so 2000, you know, we go through this scenario, 2000 documents come out, 24 hours later, Epstein’s dead. Everybody comes, you know, all the usual suspects come out with a conspiracy theory. But let me drill down on that just a second. The most obvious thing, the conspiracy theory doesn’t really work here because if you think about it, no, anybody could have taken him out. But it doesn’t change the fact that the same names are out there. The same information in the 2000 pages is there. The civil case continues and the criminal case continues, doesn’t it? Tell us about that.

Carissa Phelps:                  All of it continues. The evidence is there. The only thing we might lose is that he doesn’t get to take the fifth, which you probably would have done on some of the questioning. So we don’t get to get the implied, you know, that the implications that come out of that, that, that’s detrimental to him. It’s in, but for the victims really, again, it’s so victim centered here that they don’t maybe get to have their day where they get to see him be in maybe as little, maybe as much, just as pain as they put, he, he put them through.

Carissa Phelps:                  The people that helped Epstein put together this trafficking ring that profited off it, that benefited off of it, that got political clout or power off of it that implied that they got political pow, power or clout off of it. They are all also equally guilty and they, the people who they victimized get to have their day in court against them.

Mike Papantonio:             And you’re involved in the very first national case that’s been filed up in Ohio. You’re the person we need to talk to that understands something else about it. As I listened to the reports and I heard all these reporters pontificate about conspiracy and, you know, how this person is not responsible and that person’s not responding. The thing they missed was in those documents is the road map to how the trafficking takes place, how the infrastructure works. Please talk about that.

Carissa Phelps:                  So the fact that, and even just the conversations that Maxwell had, that Ghislaine Maxwell had with friends, about how she bragged about going to trailer parks and spas and targeting the young women that she targeted. She targeted the same victims that street pimps target. She targeted the same ones. The young women that are out there, that even internationally that they went and targeted, they knew what they were doing, they were calculated and they got better at it every single time they did it and got away with it as a team, they did that together. So and…

Mike Papantonio:             Your book tells that story. It is a moving powerful story. Then, then you go, you, you’ve somehow escaped that. You get an MBA in a law degree and now you, you are the biggest problem the traffickers have. If I, if somebody would ask me, who’s the biggest problem? It is you, because you are on a mission and you’re attracting lawyers to this mission all over the country. At this point, you probably have more trafficking cases than anybody in America because you’re out there. Now leads me to this question. What’s your next step? How do you really tell this story in the court system? What’s your plan?

Carissa Phelps:                  Well, the story is really, it’s from the victim’s perspective and it’s believing what they’re saying. There’s so much truth like Virginia Roberts Giuffre, she’s, she’s, she said her truth. There’s evidence to back it up. There’s all this very consistent evidence to back it up. It’s circumstantial evidence, but very, very rarely is the actual act of the sexual exploitation and actual acts being videotaped or, or photographed. So all this evidence is being put together. She’s telling the truth. She’s telling the truth to America and we have to listen. We have to hear that truth. And every single victim that steps up, we, we owe it to them because we’ve been ignoring for so long their truth to listen, to pay attention, to hear their facts, to hear their details and to believe them. And that’s what, that’s what the story we need to tell. And it’s not just for victims here in America. This was an international trafficking ring.

Mike Papantonio:             It’s almost as if we’re unwilling to say to these girls that went through absolute hell that, you know, we can’t believe you because of the very people involved. That’s a typical kind of situation you see like Richardson.

Carissa Phelps:                  Right, so I’m, I’m part of this survivor tribe. There are a group of people out there who are part of the survivor tribe. That’s what we need to believe in. It’s across all political lines and the human trafficking movement has done really well about staying out of the politics in terms of picking sides. We’ve done really well as a group of survivors to say, we don’t believe in the politics of this, we believe in the rights of human beings. The people that are being harmed and hurt, that need to have their voices. So together as a group of survivors, not just me alone, we’ve really worked to do that and we want to keep it that way. And, and this is really a global issue, right? It’s not even about our own local tribes or our own local politics. This is a global concern. We’re talking about Prince Andrew being in a photograph, right? That was revealed. We’re talking about people that are from other, from, from other countries that are being implicated in this and modeling agencies that from, are from overseas that are recruiting young people from overseas to be trafficked here in the United States.

Mike Papantonio:             H2, H2A/H2B, I mean, let’s, let’s spend just a second on that. Okay. You have this infrastructure in America where we allow guests, you know, under guest visas to come to United States and work. H2B, let’s use that for example, service industry. They recruit in Europe. They have these setups come on by, we’re going to show you how to be a model, how you can move into modeling. We’re going to show, maybe from the Ukraine. Okay. Girls come in from the Ukraine, they go through the process, oh, I’m going to be a model. I’m going to be an au pair. I’m going to learn the service industry. They’re going to send me to America. What’s the next thing that happens to them?

Carissa Phelps:                  Well, unfortunately there are people who don’t have those plans for them. And again, they’re very well, they’re skilled, they’re trained, they know what they’re doing, they know how they’re offering them and who they’re offering them to. And whether that’s for domestic servitude or it’s for sex trafficking, it ends up being something that they are surprised with. They’re in another country, they don’t have any access to resources. They may be embarrassed and shamed to come forward. In some instances it’s, it’s a very well structured way that they’re bringing people over. And there’s, there’s an actual shame that goes back on the family if the, if the victim speaks up and, and really have, were to say I’m being harmed. Right? According to American law here on American soil, I am being harmed. If they speak up and say that they will bring shame back to their family. So they’re afraid to speak while they’re being hurt here.

Mike Papantonio:             The team that you’ve put together is a group of lawyers, Erik Bauer, great example. He’s gotten great results, tremendous results. So you say, okay, let’s put the group together. Let’s bring the national case in Ohio. I gotta tell you something. This is the first time that I, since I’ve been following this, even before we were involved in the litigation, it’s the first time where media is now paying attention. Why? Because there’s money involved. Because the people we’re suing are hotels. The people were suing are truck stops and truck stop businesses. They’re airlines, they’re all of these people who looked the other way and allowed this terrible epidemic of trafficking to take place. Is it?

Carissa Phelps:                  Well, you know what I think America is going to be really shocked to hear is that the investment companies that invest in some of these hotels are their pension money. So the cops that are out there trying to break up the trafficking rings at the hotels are actually paying for those hotels to be in existence and they don’t know. They don’t realize how much power and control they have in terms of that’s their pension money. That’s where my background was before I, before I went into back into the law and to doing the human trafficking work with working in pensions. And so I understand that we have a say in this. We have a say. We have a say not only in our justice system and in our courts, but this money that we’re handing over to these big investment firms and these banks to invest. If they knowingly, they’re seeing that this is happening. They know this is happening and we’ve got a case right now with a 15 year old girl where all these other girls are being trafficked at the same place again and again and again and over and over and over again. This is what it is run for and those, and that brand is funded by the same pension money that comes out of the police that are fighting it.