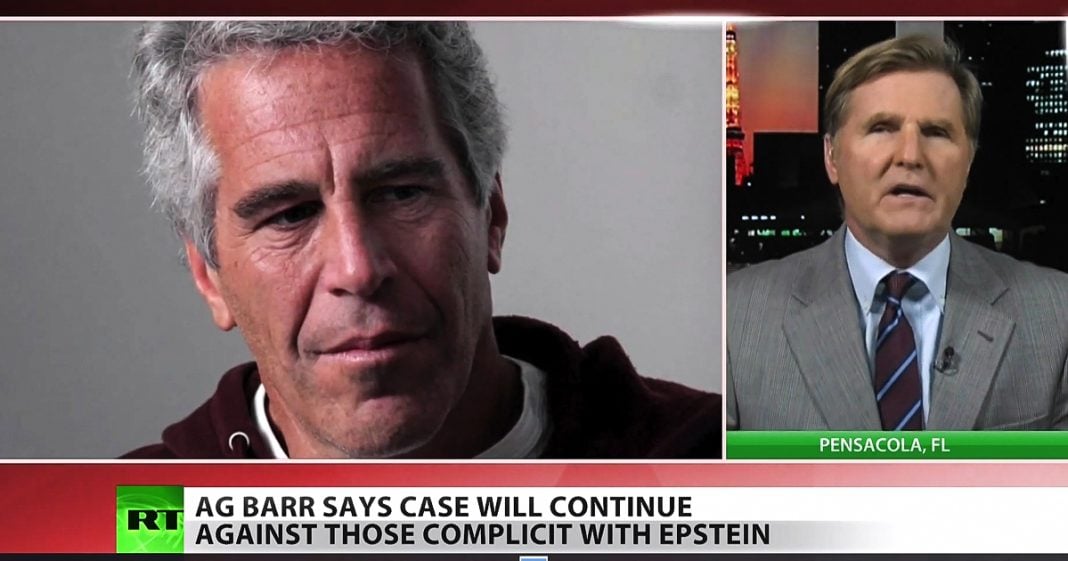 Via RT America: Mike Papantonio, host of “America’s Lawyer,” joins RT America’s Manila Chan (in for Rick Sanchez) to share his insights on the apparent suicide of disgraced financier, pedophile and accused sex trafficker Jeffrey Epstein. He points out that “there’s no uncontrolled settings” in jail “if the rules are followed.” He argues that regardless of the circumstances of Epstein’s death, there’s hope that his enablers and co-conspirators will be brought to justice.

Manila Chan:                       All right, for more on this evolving case against the now deceased Jeffrey Epstein, attorney and host of America’s Lawyer, Mike Papantonio. Mike, good to see you. But first, what happens to the criminal case against Epstein? Is it, is it put away with his death or will there still be more to come?

Mike Papantonio:             Well, the criminal case obviously since Epstein is gone, but there are so many co-conspirators here. Look, none of this happens in a vacuum. You know, everybody from Maxwell who was his Madame to the people who showed up on his lists, he has all kinds of lists that people are missing that fact. He’s got telephone lists. He’s got lists of, for example, the, the, the pilot manifest. There is, there are so many parts to this story that I think that the, the really aggravating thing to me is all the flying monkeys that are out there right now on conspiracy theories. It’s a very bothersome thing. Matter of fact, I think Joe Scarborough, this end, this, this weekend comes out and somehow says, gee, gee, he didn’t commit suicide. There was a murder and the Russians must be behind it. It, it’s, it’s amazing how something that’s so clear ends up with all the conspiracy flying monkeys coming out.

Here’s the point. If you look at the facts of this case, it was no question this was going to happen. First of all, in, in lockup settings like this, there’s no such thing as a personal privacy. There, there are no uncontrolled settings if rules are followed, no shoe laces, no belts, no access to even as much as a fingernail clipper or a radio. That wasn’t followed here. Add to the fact that your prisoner is on the front page of every newspaper in the world about one of the most salacious stories involving everyone from presidents to Dukes to Hollywood celebrities to Wall Streeter’s who consider some, who consider themselves small deities and you can’t help but say, you know, this is an important case. We need to handle this guy specifically in a, in a very specific way. One of the guards was not even a full-fledged correctional officer, Manila.

The FBI has known about this sorted ugly story for years and they’ve done nothing. And so all of a sudden it culminates with this trag, with this man committing suicide. You know, the real question is what, I want to, I just want to scream at all the celebrity fly, all the conspiracy flying monkeys. It comes down to this, show us the darn films. What do the cameras have to say? Who had access to the cameras? Where are they? This is a remarkably simple program. Just first show us what was recorded, what was recorded. So it’s taken away from the real case. The real case is that you had very influential people all over the world who absolutely knew what a bottom feeder Epstein was.

Manila Chan:                       Well, Mike, certainly a lot of enablers surrounding Epstein, that’s pretty obvious. But let me ask you this. What happens to all the information and the evidence the prosecutors had or have against him? Will, will it all get sealed away, including the names of these co-conspirators or other abusers?

Mike Papantonio:             No, no. Not at all. The, there is nothing that happens as far as the co-conspirators getting to walk. That’s what’s so crazy about this whole conspiracy idea. There’s no conspirator that gets to walk away. You know, if they show, for example, that x governor of New Mexico, Richardson, participated in childhood, in child sex, he’s got a problem. If Bill Clinton or Trump, anybody named in this thing they’re, you don’t walk away from it simply because this man’s dead. From the standpoint of a civil case, all of this stuff is still on the table. There’s nothing that really changes here and so this idea that, gee, there’s this really overbearing conspiracy. Somebody killed him. It would change nothing in this case other than the fact he personally won’t be prosecuted.

But I think all the enablers, they better be very careful right now. Let’s Maxwell woman who’s hiding somewhere in the world right now, who, who actually was his Madame, she’s the next on the list. And then after him, it’s a pecking order of everybody that the FBI should have been paying attention to long ago. Because they had exactly who the players were. They had the pilot manifest, they knew exactly what the charges were against this man and did nothing, nothing as far as their job in protecting some of these girls that probably never would have fallen to, you know, to this Predator had they done their job.

Manila Chan:                       So Mike, you mentioned that there’s a chance that a civil case can be brought, at least against his estate. So what happens to his estate that’s estimated at a value of just under a billion dollars?

Mike Papantonio:             Well, I mean, you know, first of all there’s two parts to it. The, the F, the government may come back and they may say that we’re, you know, you owe us this money and we’re impounding, you know, we’re impounding your home. We’re impounding your boat. The government’s going to reach out to it first. Okay. They’re going to try to say this was all used in furtherance of some type of criminal conspiracy and criminal activity. On the other side, you have the civil lawyers that are going to be getting judgments, there’s no question. The civil lawyers though, are now going to understand that they can expand the field. They’re not just going to go after Epstein.

There’s a lot of people here that if they prove what I believe they can prove in a court of law, there’s a lot of these individuals that better be protecting their assets right now because frankly they’re a target. They’re a target because the, the facts are clear. 2000 pages, the 2000 pages that were released tell a pretty ugly story and we’re just hearing the beginning of that story right now.

Manila Chan:                       Yeah. I mean people like the Royal Family, I’m sure they have a lot to lose there. And they’ve obviously categorically denied all of this. So maybe they should heed your advice there. But Mike, before I let you go, I gotta ask you something a little weird here. We covered his, you know, leading up to his death here. We covered some kind of farfetched things. You know, it’s unknown right now if this at this time, if Epstein had a will, but we know that he had delusions of grandeur in the way of populating the earth with his offspring post-mortem and other types of weird eugenics. Is it in any way possible for lawyers to carry out his last wishes, if that’s what they were, if it involves any sort of in vitro fertilization, things of that matter? And can they, those potential offspring then have access to his billions?

Mike Papantonio:             Arguably they could. I mean, arguably they could, but you know, that, the story to me, the important story there is that he actually talked Harvard scientists into participating with him because he was giving Harvard so much money. It’s always about money in this story. Whether it’s Hollywood, where the celebrities made him into some small deity. Whether it’s the society, the A list society types in New York who invited him with open arms and made it, even though they knew clearly that this guy was a pedophile, he had pled to being a trafficker. He was, he had at least been charged with that. They knew exactly who he was, but for years Hollywood embraced him like he was a small deity.

Wall Street embraced him like he was just one of them. And the scientist on that story that you just told, the scientists did the, the same thing because he was spreading around money. It’s a really ugly part of this story that’s not being told enough. All the people that enabled him, even after the ugly things that he did, making him into this TV personality, making him into this extraordinarily important person, he was a pedophile. At the end of the day, a pedophile hung themselves because they couldn’t live with the ugly history that they have created in this country.

Manila Chan:                       Yeah, certainly not the last we’re going to hear about it, I’m sure. As always, appreciate your legal expertise here. Mike Papantonio, host of America’s lawyer, thank you for being with us.