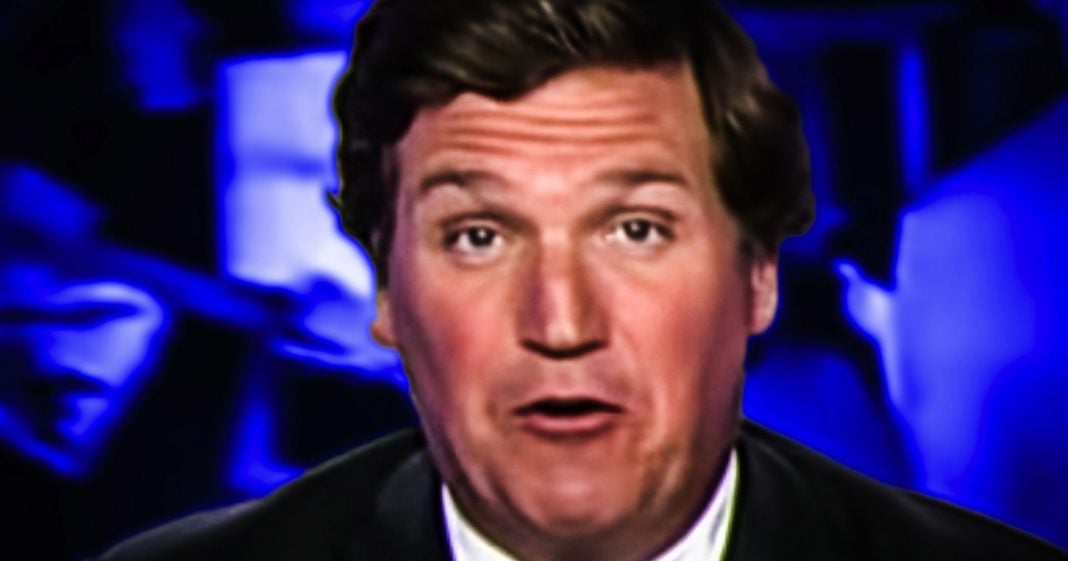 During his Tuesday evening White Power Hour, Fox News host Tucker Carlson proudly proclaimed that White Supremacy is actually a hoax and that it isn’t a real problem here in the U.S. This man has gone full white hood at this point, and there’s no need to pretend otherwise. He has shown us who he is and we need to stop pretending that he isn’t a massive racist. Ring of Fire’s Farron Cousins explains.

On Tuesday evening on Tucker Carlson’s white power hour on Fox News. He made the claim that white supremacy in the United States is a hoax and that it’s not a real problem. Here’s his quote.

“This is a hoax, just like the Russian hoax. It’s a conspiracy theory used to divide the country and keep a hold on power.”

Racism according to a racist is a conspiracy theory. This coming from the man who every night tells us that there is an invasion, that these people are dirty. They’re going to dirty up the United States. They’re going to alter our culture. They’re going to change our demographics. That’s racism, buddy. You can’t claim it’s a hoax because you fit the bell. You want to see proof of racism. Go look in the nearest mirror talker. It’s very real. He went on.

“If you were to assemble a list, a hierarchy of concerns, of problems this country faces, where would white supremacy be on the list? Right up there with Russia, probably. The combined membership of every white supremacist organization in this country would be able to fit inside a college football stadium.”

Which by the way, Tucker, some college football stadiums in this country can hold close to a hundred thousand people.

But what Tucker Carlson doesn’t realize is that his comment right there disproved a whole decades worth at least of Republican right wing talking points. Oh, there’s so few of them out there that it doesn’t even matter. Really? Do you remember when the Trump kids, and I don’t remember which one exactly, made the metaphor of the three poisoned Skittles in the big bowl of Skittles, but just because three out of a few thousand were poisoned, you wouldn’t eat any of them. That’s how they described immigrants coming into the United States. Well, Tucker Carlson says it doesn’t matter if there’s only a couple. That’s okay. Those, those don’t exist. They do exist. Even if they could fill a stadium. You’re still talking about 50 to 100,000 people in the United States and according to the FBI and other law enforcement agencies, those people represent a very real, very clear threat to our lives here in the United States. That’s what’s happening talker. It is not a hoax. How we saw this past weekend that it wasn’t a hoax. We saw what hatred of the others brings to this country perpetrated at the hands of white men who hated brown people. That’s what this is about, and you may not be willing to pick up a gun and take somebody’s life, but you hold the same beliefs as those people as that man who went down to El Paso and shot 20 plus people.

You to believe the same things, Tucker. The only difference is, he was willing to kill people for it and you’re not. That doesn’t make you any better than him though because you’re out there every night inspiring the next one. That’s your job with Fox News. Now you are 100% a racist and a white supremacist. That is what Tucker Carlson is. That is what Tucker Carlson has always been. He’s just no longer trying to hide it from the public.