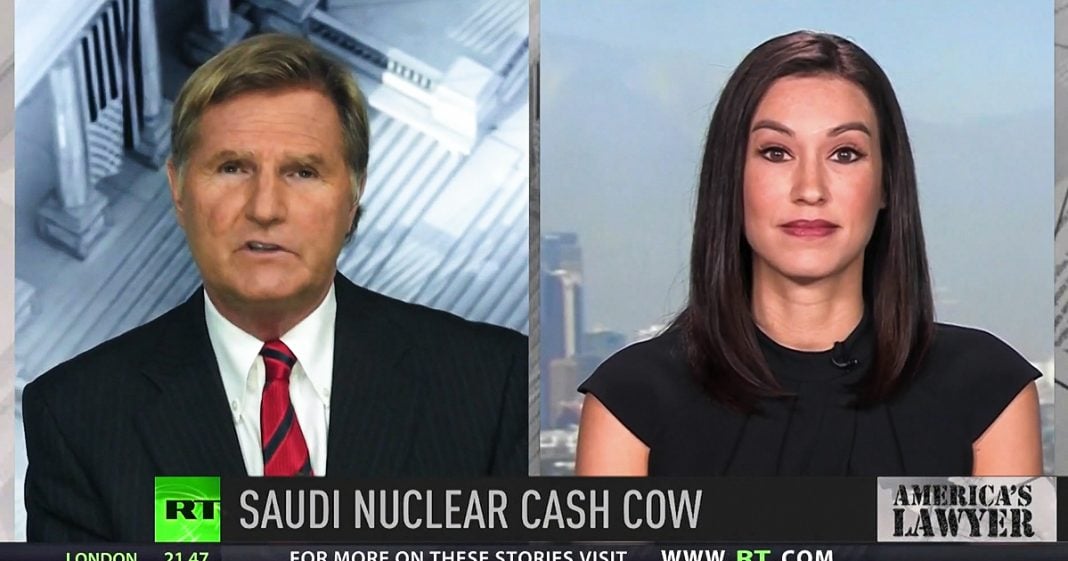 Via America’s Lawyer: Mike Papantonio and RT Correspondent Brigida Santos walk us through a report published by the House Committee of Oversight & Government Reform, which details how President Trump and close allies have lobbied for nuclear technology transfer to Saudi Arabia IRRESPECTIVE of non-proliferation rules. This harrowing report shows a clear prioritization of profit over the safety & security of American citizens.

Mike Papantonio:             New documents reveal how the Trump administration has obliterated the lines between government policymaking from corporate and foreign interests. RT’s Brigida Santos joins me to talk about the latest. Tell me about the documents. What did you learn from the documents in relationship to this story, Brigida?

Brigida Santos:                   Mike, over 60,000 documents have been obtained by the House Committee of Oversight and Government Reform in an ongoing investigation into illegal foreign lobbying by Trump advisors. The documents outline how the American company IP3 International and its allies in the Trump administration tried to influence the president to advance their own financial interests at the expense of national security. The committee began investigating ties between Trump advisers and Persian Gulf officials after whistleblowers accused IP3 of pushing the administration to allow Saudi Arabia to ignore the rules of the atomic energy act in its plans to transfer US nuclear technology to Riad.

The so-called gold standard rules are designed to prevent the spread of nuclear weapons, but IP3 has repeatedly complained that the rules prevent it from winning lucrative Saudi nuclear contracts. The documents highlight the unprecedented political access enjoyed by IP3 which has also described the Trump administration as an extended team member.

Mike Papantonio:             You know, the ugly part of this store, there’s so many ugly parts of this story is the, the media is always giving Saudi Arabia a break, all the time. Corporate media always and you look behind, lift up the curtain and you see why. They’ve got some of the best PR firms in the entire world working to make them look like they’re not the criminals that they are. Like they aren’t the criminals that were responsible for 9/11. We all know the vast majority of the people involved in the 9/11 murder of 3000 Americans were Saudi Arabians. And when, when we found that out, what did we do? We let them go.

Brigida Santos:                   Well, the report implicates president Trump’s former national security advisor, Michael Flynn, who says he was an adviser to IP3 at the time. The president’s friend and former inauguration chairman Tom Barrack is also under investigation. His investment from Colony Northstar was expected to profit from this deal. The documents show that Barrick also, also pursued a plan with Saudi Arabia and the United Arab Emirates to buy Westinghouse Electric, which is the sole American manufacturer of large nuclear reactors. Barrick did not acquire the company in the end, but the Trump administration is still considering whether it will allow Westinghouse to sell nuclear reactors to Saudi Arabia. Barrack also sought a $50 million stake in that company.

Mike Papantonio:             Again, president Trump wake up, they murdered 3000 Americans. They’re the people that have the most restrictive, it’s despot country in the world and they are our best friends. Let’s be, let’s, let’s deal with reality here. These people aren’t our friends and if we give them a nuclear capability, we’re going to find that out. How dangerous would a nuclear deal with the Saudi, Saudi Arabia be, if the countries free to abandon all the requirements? This is what they’re, where they’re headed. Just abandon all the requirements of the Atomic Energy Act. That’s what Trump wants to allow to happen, or at least his advisors want that to happen. How dangerous is that?

Brigida Santos:                   I mean, this will be the most dangerous policy decision of the Trump administration. If the Saudis are granted permission to buy American nuclear technology without following the gold standard of non-proliferation, the entire Middle East and beyond could interpret the deal as a green light to build up their own nuclear arsenals. You know, this is called the gold standard, not the double standard for a reason. The authors of the House report say the documents raise serious questions about whether the White House is willing to place the potential profits of the president’s friends above the national security of the American people and the universal objective of preventing the spread of nuclear weapons. And they’re absolutely right now that the US has withdrawn from the Iran nuclear deal and the inf treaty, we’re one step closer to triggering a new global nuclear arms race.

Mike Papantonio:             Again, Mr President, the Saudi Arabians are not our friend. It’s simply expedient for them to do, have this relationship with the United States. They accomplish what they want by spreading around money, and that’s why the media right now needs to ignore that money and tell a story. This is a critical story. This is not the type of, this is not the type of leadership that we want to be doing business with in Saudi Arabia. This is a very dangerous situation that’s setting itself up where it comes to this atomic energy problem. Thank you for joining me, Brigida.