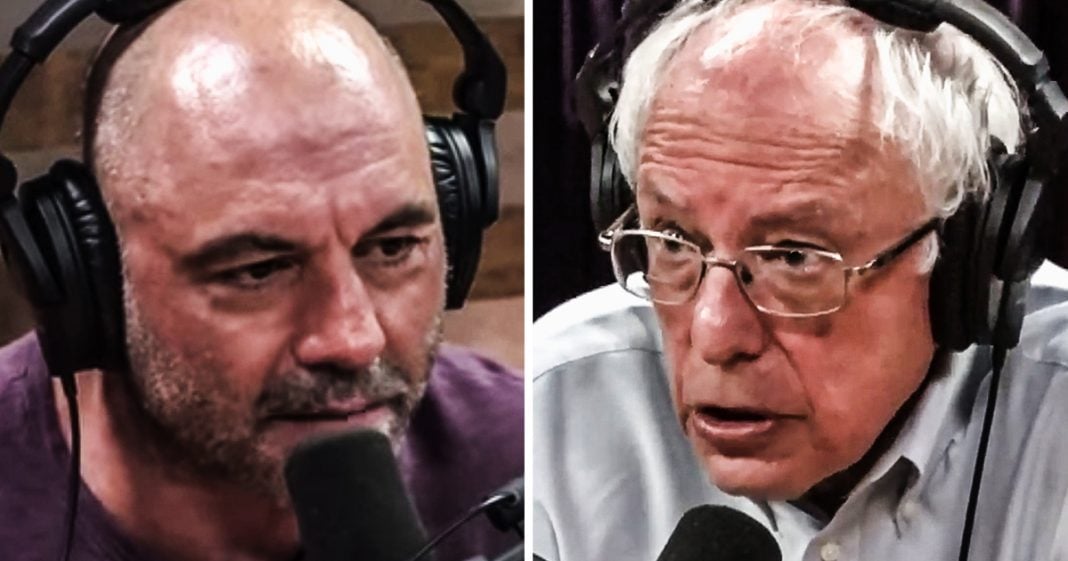 During an appearance on The Joe Rogan Experience this week, Senator Bernie Sanders said that he’ll reveal the truth to the public about aliens if he is elected president. He made it clear that whatever he learns, he’ll make sure to tell the public, a similar promise to what John Podesta made during the Clinton campaign. While this may seem silly, it does indicate that Sanders would be an honest and transparent leader, as Ring of Fire’s Farron Cousins explains.

Earlier this week, Bernie Sanders appeared on the Joe Rogan experience podcast and aside from actually doing a phenomenal job of gaining more supporters, and we’ll get to that in a moment. He also said something that was quite interesting and entertaining and it went like this. Joe Rogan asked him,

Sanders: “Well I tell you, my wife would demand I let you know… she’s not a UFO nut. She goes, Bernie, ‘What is going on do you know? Do you have any access?’”

Rogan: “You don’t have any access? You’ll let us know though?”

Sanders: “Alright, we’ll announce it on the show. How’s that?”

So Bernie Sanders is out there telling us that when he becomes president of the United States, when and if he learns about aliens and UFOs, good or bad, real or not, he is absolutely going to tell us.

This was a humorous exchange, not necessarily meant to show that a Bernie Sanders believes in aliens or absolutely wants to expose the truth. Not like John Podesta did, by the way, in 2016 with Hillary Clinton. Podesta is a huge a believer in all of that. He wanted to expose all that. Had Hillary Clinton been elected and Bernie’s out here saying, you know what? Sure, if I find out I’ll let everybody know why not, but what this does is show us, I believe that Bernie Sanders is going to be a much more transparent president than we in this country are used to. Now. Maybe the UFO thing pans out for, maybe it doesn’t, but there are some very real secrets that the government would like to keep secret that need to be exposed and I’m hoping that that is what Bernie Sanders would actually do if he got elected. You know, there’s plenty of things that have been classified that were set to be declassified, but then they got reclassified.

The public needs to know. We need to understand more about our country, how our intelligence agencies are working, what’s really happening behind the scenes. You know, how many people in this country have been wiretapped how many people in this country are in a government database without even knowing it. How many people are getting talked about at government agencies and they have no idea. And I bring that up because a few years ago, friend of mine, uh, we were working at the smog blog at the time, sends me an email on Christmas day. She had just gotten a whole bunch of FOIA documents and she found, I was in there being talked about at the State Department because I wrote a letter about how horrible the State Department was on, I believe it was the issue of fracking. I never would have known that.

That I angered the higher ups in the Obama Administration by the way, because I dared called them out for fracking. We need to know these things folks, if they’re out there talking about you, if they’ve got a file on you for some reason. Yeah. That’s the kind of thing people should know. We should know what the government is hiding from us, what they think we can’t handle. And again, I hope that’s what we would get from Bernie Sanders. Now back to the other point I had made earlier, go through and some people have been posting these on Twitter and other social media, uh, to show what an impact Bernie had by going on Joe Rogan. There’s comments out there saying like, I always thought Bernie was very radical because that’s what I had heard. But listening to him talk, he makes a heck of a lot of sense. You just gained a supporter. Bernie got a fair shake on Joe Rogan. He was allowed to talk. He was allowed to get his point across and he was allowed to connect with an audience that other candidates probably wouldn’t even think about connecting with.

Whereas your MSNBCs, your CNNs, they’re out there saying, Bernie’s got these ideas. They’re pie in the sky dreams. We can’t do it. He’s so far left. He’ll lose in a heartbeat. But then when the actual public goes out there and listens to him speak, they say, you know what, he’s right. He’s absolutely right. And the more I hear from him, the more I like them. They say, and that is a power that too few politicians have today, but it just goes to show you how powerful a campaign can be when it’s run on issues and not personality. And that is what Bernie’s running on right now.