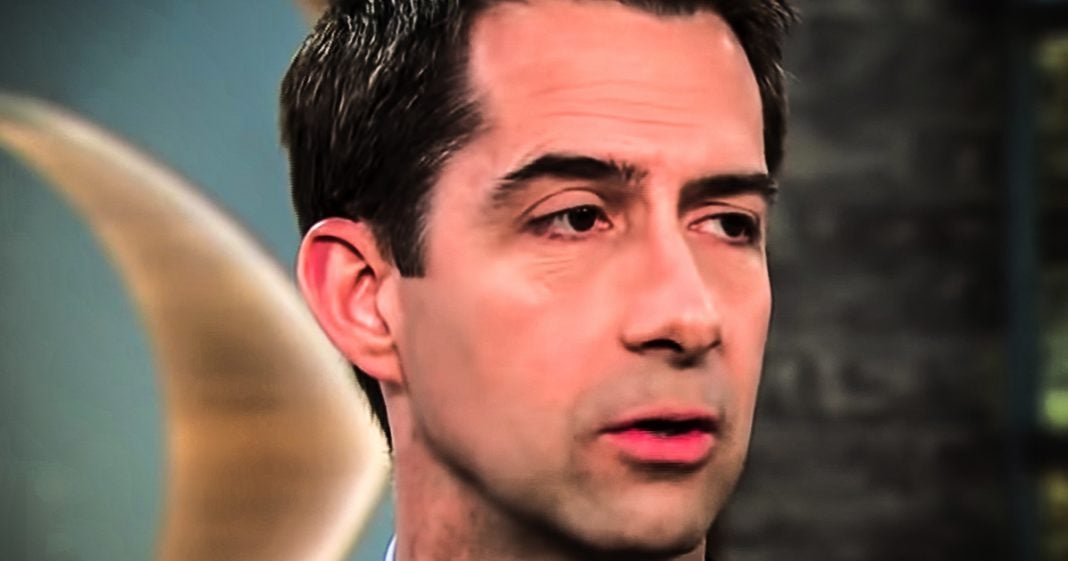 Republican Senator Tom Cotton, the man who could have easily been charged with treason for trying to convince Iran to NOT sign the deal put together by the Obama Administration, now says that Democratic presidential candidates are the ones who have “lost their minds.” Maybe Tom should take some time and read some polling data, because the most progressive Democratic candidates are actually offering policies that even Republicans love. Ring of Fire’s Farron Cousins discusses this.

You know, what’s really interesting about the Republican parties, I feel like every so often they have to say something that’s just completely off the wall bonkers. So people don’t forget that they exist. You know, every now and then ran Paul comes out and he says something stupid. And you know, Lindsey Graham will do that. And Tom Cotton, we’ll do that. Just so that you remember that. They’re actually a thing. Louie Gohmert was king of that, but Tom Cotton actually recently, just last week to be a more precise appeared on the John Catsimatidis and I’m pretty sure I mispronounced that in my apologies for that. But anyway, appeared on this guy’s radio show, um, where he said that the Democrats, those running for president right now have lost their minds. Here’s what he said. He said,

“We are going into a highly consequential election. The Democrats have truly lost their mind.”

The Democrats have lost their mind. Now keep in mind, this is coming from the Guy Republican Senator Tom Cotton from Arkansas, who pretty much committed treason, uh, during the Obama administration when we were crafting the Iran deal and Tom Cotton sent his little letter over to a ran begging them not to sign on to this deal. And as many experts weighed in at the time, examine this, uh, that did fit the definition of treason, Tom. And yet you trees in as Tom are the one out there telling us the Democrats have lost their minds. Who boy, they crazy, right? Let me tell you what’s crazy, Tom crazy would be not paying attention to polling data here in the United States, which I’m assuming you have not because as it turns out, the majority of people in this country, including Republicans, buddy a, they do what?

Medicare for All, as long as they can keep their doctor. They love that idea. They want a green new deal. They want the president to stop being so damn racist. They want all of these things that the progressive wing of the Democratic Party is out there pushing in their bid to become the next president of the United States. So you may think it’s nuts and you can go ahead like all the other Republicans and say, oh, they’re all pushing us towards socialism because none of you are smart enough to know what that word means. And you’re certainly not smart enough to know that that’s not what this is. And you can think that your base is dumb enough to believe you who is not very smart, but they actually know better. Your base has a hell of a lot smarter than you give them credit for Tom and that’s going to come back and bite ya.

It’s going to come back to bite all Republicans in 2020 because the more you folks go out there scaremongering about this mythical socialism that progressive’s like Bernie Sanders and Elizabeth Warren are allegedly trying to push. Yeah. That socialism doesn’t actually exist. What they’re trying to say is, hey, let’s have some social programs, like a debt free college student loan forgiveness and Medicare for All. You know, like pretty much all other, almost all other industrialized countries on the planet have, let’s just catch up to the rest of the world. That’s not socialism, Tom. That’s progress. And if you can’t understand that, then you’re the one who is actually lost your mind.