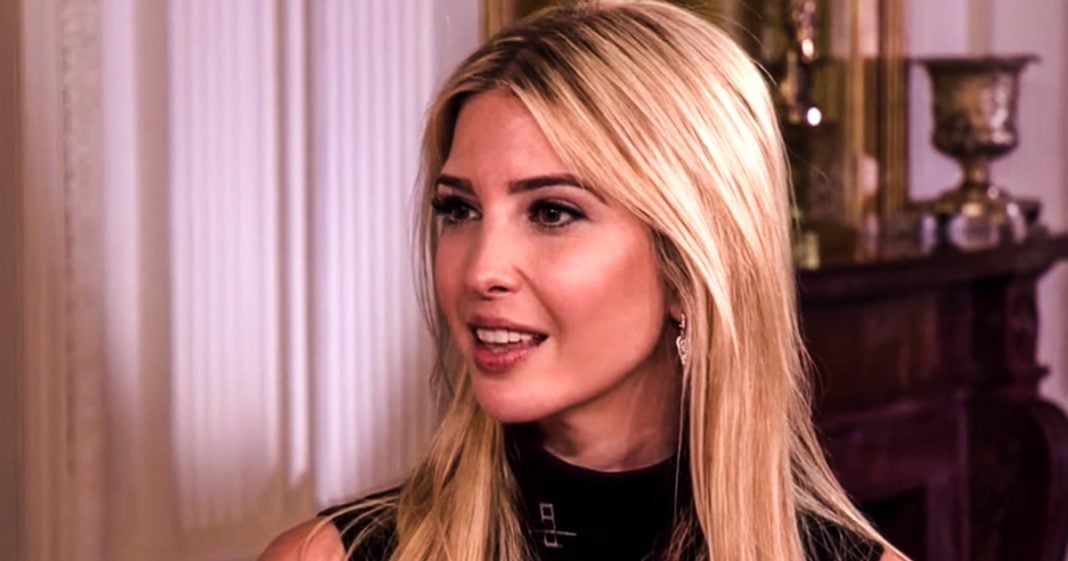 According to a lengthy profile in New York Magazine, Ivanka Trump has no clue how privileged and spoiled she really is and she actually believes that she has accomplished everything in her life without the help of her father. This is according to her friends how spoke to the magazine. This explains a lot about Ivanka, and it is likely a theme that carries over to both Donald Trump, Jr. and Eric Trump. Ring of Fire’s Farron Cousins discusses this.

This New York magazine, uh, expose on Ivanka Trump. Uh, we had talked about it earlier, but I want to come back to it again because there’s another important part of it that people need to understand if you haven’t taken the time to actually read the article. And that is that according to Ivanka Trump’s friends up in New York, the people who spoke to New York magazine for this article, Ivanka Trump has no idea that she’s privileged. These friends claimed that Ivanka Trump truly believes that she has accomplished everything in her life, that she is accomplished without the help of her father. And even the friends admit that this is a pretty delusional way for Ivanka to go through life. Here is what one of them said quoted in the article.

“Ivanka always has to prove to herself that she’s gotten ahead on her own without her father… She really has no idea she’s privileged. She genuinely thinks she’s earned everything she has. She goes on and on all the time about how hard she works.”

Now, the friend did say, yeah, hey, she works hard. And she, she goes to the gym and she goes to dinner with friends, which was really, don’t classify as hard work for any kind of business, but a, okay, sure she goes to the gym and she eats dinner. Good for her. But the fact of the matter is that Ivanka might be as delusional as her father because Ivanka has not accomplished anything on this planet without her father’s help, whether it’s her last name, whether it’s money from her father, whether it’s her father promoting her stuff, or giving her cushy jobs that she otherwise would not qualify for everything she has, she owes to that man. And that may actually be one of the reasons why she is such a suck up to Donald Trump.

But we have seen this kind of, Oh, I earned everything, even though I never did mentality before. We saw it in George W. Bush. George W. Bush was a complete failure throughout his entire life. You know, went from being a drug addict and an alcoholic failing and bankrupting every company he ever ran. But his dad and his daddy’s buddies kept giving him more, given him more, and then eventually his dad and dad’s friends gave him the presidency. Ivanka Trump’s the same way. You know, George W. Bush continued to fail upwards and that’s basically what Ivanka Trump is doing. She doesn’t have the bankruptcy’s and failures necessarily that George W. Bush had, but she has that same, I’m a very good person and very good at job mentality as what we see from her. That’s what her friends see from her when they hang out with her. You know, they also went on to mention the fact that she’s very bitter now and that she has no problem just taking things that she believes she is owed. For example, a security clearance that she did not qualify for using her private government computer for official government work or private personal computer, excuse me, for government work. And of course, all of those trademarks that she’s won from China because of her position in the White House, they believe that something has changed with Ivanka and that she’s now a little bit more just angry and just if she thinks she’s owed something, she takes it now, that is reminiscent of another president, the president that we have today.

So it may have taken her 30 plus years to get there, but Ivanka Trump, according to her friends, is finally turning into her father.