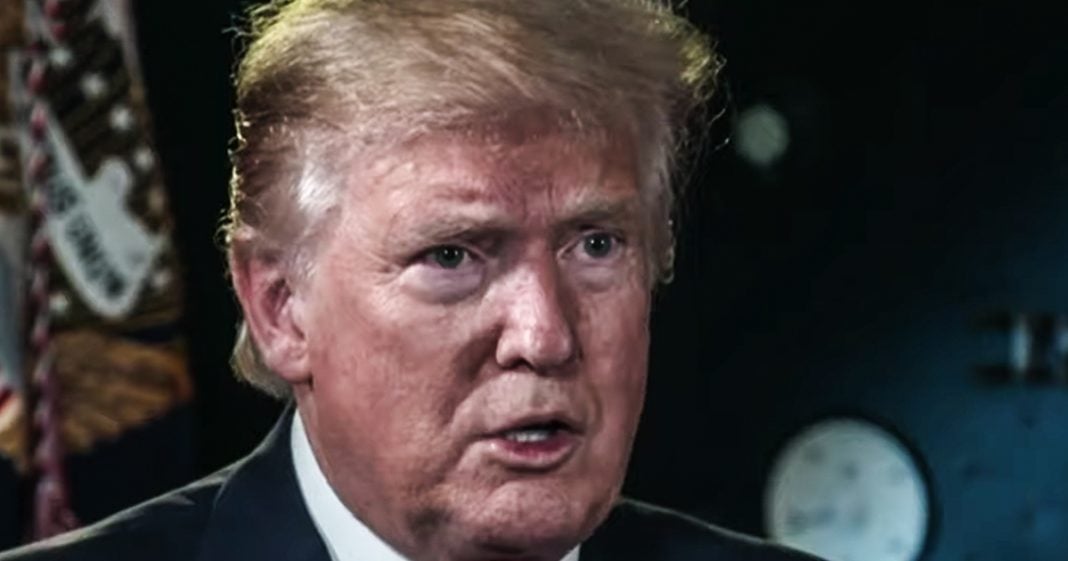 According to new reports, Donald Trump’s economic and financial advisors agree that his tariffs are a really bad idea, but he continues to choose to ignore them and their warnings. The United States is paying the price for Trump’s arrogance, and the stock market suffered one of the worst days in history on Monday as a result of his idiotic policies. Ring of Fire’s Farron Cousins discusses this.

On Monday, Donald Trump’s escalating trade war sent the stock market spiraling even further downward in what analysts have actually called. One of the worst days in the history of the stock market. Dropped over 900 points late yesterday afternoon as tensions between DC and China heat up. You’ve got Donald Trump over here saying, we’re putting more tariffs on your remaining $300 billion worth of goods. China’s manipulating their currency. They’re saying they’re not going to work with the U.S. Maybe we’re going to throw some more tariffs out there. And all of that sent the market spiraling downward. And here’s the kicker, folks. You know, Trump announced these new tariffs last Thursday, but his advisors knew that this crap was going to happen because they were actually already over in China at the time when Trump announced this new tariff on Twitter, you know, week ago, you had Steven Mnuchin and US trade representative Robert Lighthizer over in China, actually engaging in trade negotiations.

They were sitting at the table trying to get this worked out so we didn’t have to escalate anything. And then they came back and told Donald Trump, hey, uh, things didn’t go the way we wanted. You know, we weren’t able to finalize any kind of deal. I don’t even know if we came close to reaching a deal. So, you know, that’s kind of where we’re at right now. And Trump responds by saying, well, I’m going to put a 10% tariff on $300 billion worth of their goods to which Mnuchin and Lighthizer said, no, you can’t do that. That is horrible. Not to mention you have a truce with the president of China. You’ve already agreed not to do this. You can’t do it. They’re going to retaliate. Things are going to go badly. And then you had John Bolton, Larry Kudlow, Trump’s economic advisor and chief of staff, Mick Mulvaney, who also in the Oval Office, came in and said, don’t do this.

You more on, you cannot escalate this trade war. This is going to end badly for everyone. And according to reports, this then resulted in a two hour debate between Donald Trump on one side and everyone else on the other side. And as we all know, Donald Trump apparently won because he decided to put more tariffs in place on Chinese goods. But at the end of that little meeting, when Donald Trump announced these tariffs on Twitter, by the way, that’s how we get our official now announcements now as a country on Twitter. Um, they did help him craft the tweet, you know, so it wouldn’t be ridiculously insulting and just make things worse. But then flash forward four or five days later and China retaliates the stock market crashes and Donald Trump is still out there telling us on Twitter, things will be fine. Don’t worry, China can’t hurt all of us.

Don’t worry. Poor farmers, my bailout is on the way for you so you can still vote for me in 2020 I’m looking out for you. These people don’t want a handout. They just want to be able to sell their goods. But thanks to Donald Trump’s trade war, they can’t in sending them a, a check right now isn’t going to do enough to buy their votes back. Sure. I’m sure some of them will, but the majority of them understand like, hey, this is a great check. You get, send me another one next month and the month after and for however long you continue this disastrous trade war because a one-time check to buy some of my crops to let them go rotten. A silo isn’t exactly going to help me and my family get through the winter, but that’s what Trump thinks. And he also, according to what he said the other day, he thinks that you, US citizens don’t pay these tariffs.

Now those are tariffs on China. He tells us this man is too stupid to be the president of the United States. And I feel like I’ve said that one too many times over the last two and a half years. But apparently we have to keep saying it because it’s not just that he’s a bad president, it’s that he is without a doubt the dumbest person to occupy the Oval Office in my lifetime. And yeah, we went through eight years of George W. Bush, and I have no qualms about saying that Donald Trump is a heck of a lot dumber than George W. Bush could ever hope to be.