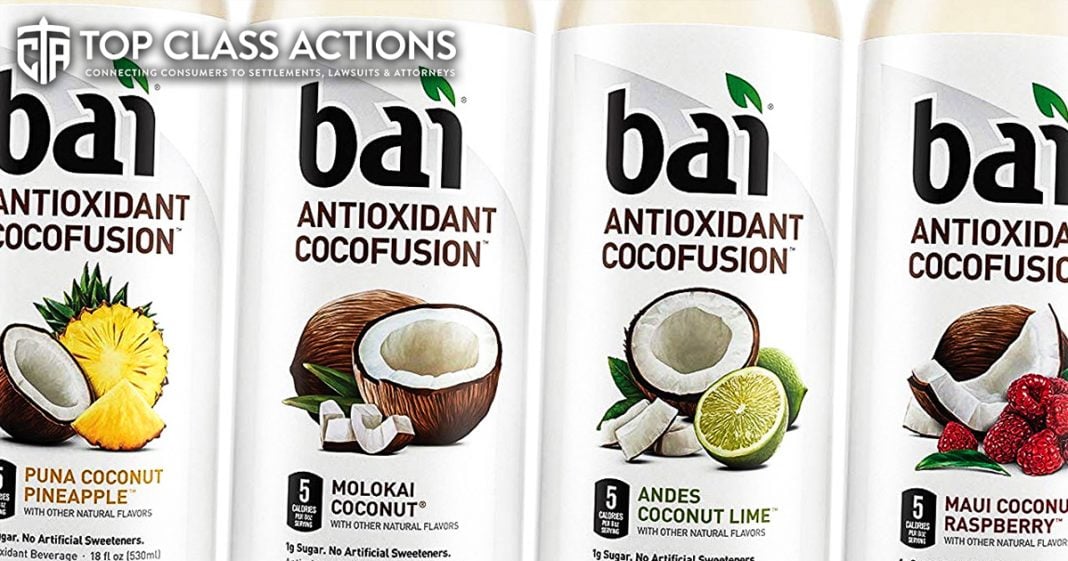 Farron Cousins:                  What consumers want from corporations really isn’t that simple. If you advertise a product, if you say that something is in a product, all we’re asking as consumers is that what you’re saying is in the product is actually in the product. It seems like a fairly simple exchange, right? You tell us the thing is there, we say, okay, we’ll buy it because the thing is there, only to later find out that in many instances the thing itself is not there and that’s actually what we’re finding out now according to a new lawsuit against Bai beverages. Joining me now to talk about this is Scott Hardy with Top Class Actions. Scott, same story, different company. The, the label shows one thing, but the ingredient list is telling us another one with these buy beverages. Tell us what’s happening.

Scott Hardy:                          Sure, so in this class action, you have Bai beverages, which makes a number of different juice flavored drinks. In fact, I actually picked up a Bai beverage a little while back when I was out with my daughters. I saw it in target out there about to go shopping. I said, man, I’ll get this. This should be a healthier choice than getting a soda of some sort. But me being Scott Hardy, I went ahead and took a look at the label after I bought it thinking man, this looks like it’s full of fruit juice. And that one was less than 3% fruit juice even though there is fruit all over the label. And I went ah, should have known. Well Bai is back at it with their Cocofusion line of beverages. And once again, they’ve got lots of fruit on the front, but it turns out that there might not actually be any or there’s very little fruit, if any, at all flavoring these beverages.

And that is illegal, especially in the state of California. And so you can’t just go ahead and have your aunt, Andes Coconut Lime, Puna Coconut Pineapple, Mau Coconut Raspberry or Malawi Coconut Mango and have these juices or these, these beverages because there’s no juice. But if you have these beverages, you can’t market those without stating on the label, um, these are fruit flavored beverages. They’re not actual, there’s no fruit juice in them or very little. If you don’t have that disclaimer on there that they’re fruit flavored, then you know, you’re, you’re going to get a class action just like this one.

Farron Cousins:                  You know, it’s really interesting and I don’t think a lot of people understand that, that it’s not just, oh the, the label doesn’t say clearly. There’s laws against this, like it’s illegal to make people believe you have something or to market something as having real fruit when in fact it does not. There are laws specifically written about this to prevent this because it is such a big deal and obviously because corporations, when given the opportunity typically don’t do the right thing until they’re actually forced to do it. And that’s not just Bai, I mean that’s pretty much across the board with pretty much most companies you would come into contact with on a daily basis.

If they were not forced to do the right thing by law, a lot of them would go ahead and try to see how far they could push it before they got in trouble. But with this particular instance, as you pointed out, these bottles, these labels, they’re covered in real fruit. They have real fruit names, you know, coconut, mango, raspberry. Those are real things, but they’re not in the drinks. You know, maybe some coconut juice in there a little bit, you know, extract or concentrate whatever they want to call it. But the rest of it is kind of the typical thing you find in a drink. You’ve got your, your acidity, you’ve got your flavor compounds that don’t actually come from any of these fruits and they’re, they’re in there to mimic the flavor that is advertised on the bottle.

Scott Hardy:                          Exactly. They’re sitting there because they can, they can put these flavorings in there and they can put those on a shelf and they won’t expire for a very long time. I mean, what kind of, p’d me off and maybe look at the labels on the bottle itself was when I saw all of the fruit on it and then I shook it up and I noticed that there was, it was still pretty clear. You know, yes, it was a, it was a pleasant color, but it was clear it wasn’t cloudy. I didn’t see any fruit floating in it and I went, huh, I wonder what the deal is, and then I found out that yes, it wasn’t actually, you know, the amount of fruit in these beverages was very small. So you need to be checking these labels.

You’ve got to take a look and not be fooled just because they’ve got that pretty picture. Because these companies will keep putting those pretty pictures on the labels because you want to be healthier and you’re willing to pay a premium to try to live a healthier life. But unfortunately they charge that premium in this case, and it appears that it doesn’t have any of the health benefits that you think you might be getting.

Farron Cousins:                  Right, because that’s part of the underlying issue too, is the fact that, you know, people do want to be healthier if they see something that is actually made from fruit. It’s obviously going to contain a lot of the vitamins and other beneficial compounds that that fruit has in it. They’re gonna pay a little bit more for it. They don’t want to pay a little bit more to have extra potassium citrate or citric acid or white tea extract or sea salt or malic acid. That’s not what people want to pay extra for, and yet, in this instance, according to this lawsuit, it looks like that is exactly what’s happening with these drinks from Bai.

For more on this issue, please follow the link in the description of this video. Head over to Top Class Actions, and of course, as always, if you have not already done it, please do subscribe to their weekly newsletter. Absolutely one of the best resources out there for American consumers, Scott Hardy, Top Class Actions. Thank you very much for talking with us today.