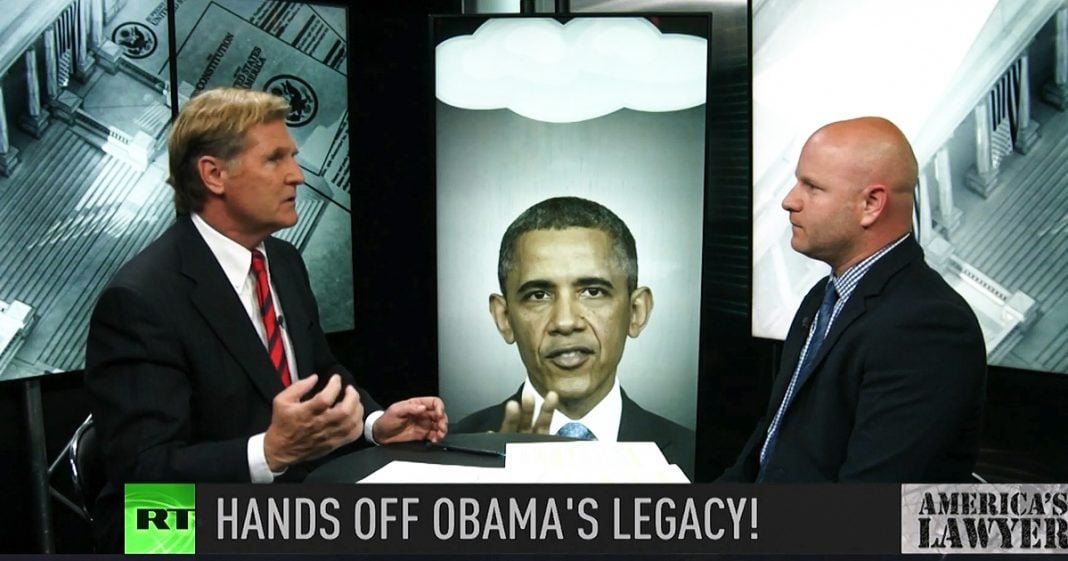 Mike Papantonio:             Former attorney general, Eric Holder, is furious that Democrats are attacking Obama’s legacy. Likely because Holder is responsible for the very worst parts of the Obama administration. He’s hiding, isn’t he? He says, please don’t look into this, because he knows that as the attorney general of the United States, he allowed more white collar criminals to get away. He failed to do anything about antitrust. He failed to actually prosecute white collar crimes when they were staring him in the face. Would not go after the pharmaceutical industry. Would hit them, would slap them on the wrist. Even when they committed the worst kinds of crimes, he would fine them, let them walk and business as usual. This was one of the worst attorney generals that we’ve had in a very long time.

Farron Cousins:                  Absolutely. And that’s actually what a lot of the hindsight analysis about Eric Holder tells us now. Even, even on the left, people agree, finally, once you get out of that cloud of, oh, Obama was so great, but no. Stop. Look at it objectively. Stop deifying these people and acting like they’re above criticism, which is what Holder thinks right now. It’s what Biden thinks right now about Obama. Everybody’s open for criticism and none of them were perfect. But you and I spent many years talking about the failures within the Obama administration. We also talked about the good things that happened, but you have to acknowledge those failures.

But when you look back at it, and you and I had this conversation earlier, you start to realize that most of these bad things that we talked about during Obama, they’re all traced back to Holder. The increased surveillance state, the, the spying on reporters. These were Eric Holder. You know, a not prosecuting properly anybody from the BP oil spill. That’s Eric Holder, you know.

Mike Papantonio:             He had the ability to do something and didn’t do anything. Let’s, let’s, let’s tie some things up. We forget where he came from. Now, this is not a story. This story to me is not about Obama. This story is about Eric Holder saying, don’t look to, don’t, don’t criticize Obama because Eric Holder understands that he was the weakest link in the Obama Administration. Obama won’t admit that because they’re pals. Okay. But here’s the truth. Eric Holder came from the Covington Burling. It’s a law firm in Washington, DC. They’re known for, their deal is they represent white collar criminals. That’s what they do. He left there and he gave virtually every white collar criminal that came through in the eight years that he was attorney general, everybody, well, seven years, and we had the woman who replaced him was even worse.

Loretta Lynch was even worse. So let all the white collar criminals go. Don’t, as you point out, don’t do anything where it comes to meaningful change culturally on things that really matter. Look, here’s what Eric Holder was told straight up. If you continue letting these white collar criminals go, you’re not going to change the culture of crime on Wall Street. You understand? Fine them, hit them with a, a billion dollars. It doesn’t change a thing. Nothing changes until you perp walk these people. Eric Holder was told that again and again, and he resisted because he comes from the Covington Burling firm who represents white collar criminals. And you know what? He’s back there again.

Mike Papantonio:             He leaves his job as attorney general. They give him one of the biggest offices in the Washington building right there at the Covington Burling. So, so when he comes out, again, this story to me is not as much about Obama as it is Obama’s failure to understand that he had a terrible attorney general and for us not to address that is too tribal. You know, remember us getting up at four o’clock five o’clock in the morning going on Fox News to defend Obama? I mean, during his election period we were there for him. Obama left, day after day for Obama raising money for Obama. And if I were to sit down with him today, I’d say the weakest part of the whole picture was, was Eric Holder.

Farron Cousins:                  A lot of the problems that people had back then that they have today that they have with his legacy in general, those are Eric Holder problems. You know, you, you and I have sat here and discussed as well the fact that we have, you know, tons of great, wonderful lawyers in this country. You know, members of the trial lawyer hall of fame that went and sat down with Obama on several occasions and said, listen, the judges you’re picking are horrible. If you want better picks, come to us.

Mike Papantonio:             There’s a lot of great ones out there. They’re not biased. You know, they know what they’re doing. But instead of listening to the people who go up against these lawyers, every day, Obama listened to Eric Holder. Eric Holder, who’d come up and say, listen, I’ve got some, you know, there’s some people out here that we should consider instead. And of course they’re all corporate lawyers. And that’s what we ended up with. And that is part of the reason the judiciary is so screwed up right now, not just because of Trump’s appointees, but because the ones that Obama put there aren’t that much better.

And in a way, I really hate to see Obama catching all the heat about it. And if as, as you pointed out, Howard Nations, probably one of the best trial lawyers in the country, actually sat down with Obama and said, you’ve got these problems. Why are you ignoring these problems? And we saw all of those problems surface with Eric Holder and, and for Eric Holder to say, oh, please don’t, you know, you’re not running against Obama. Don’t look too closely into Obama. What he’s really saying is don’t look closely into the administration that I was in charge of, the administration that allowed all these terrible things to happen. Farron, thanks for joining me. Okay.