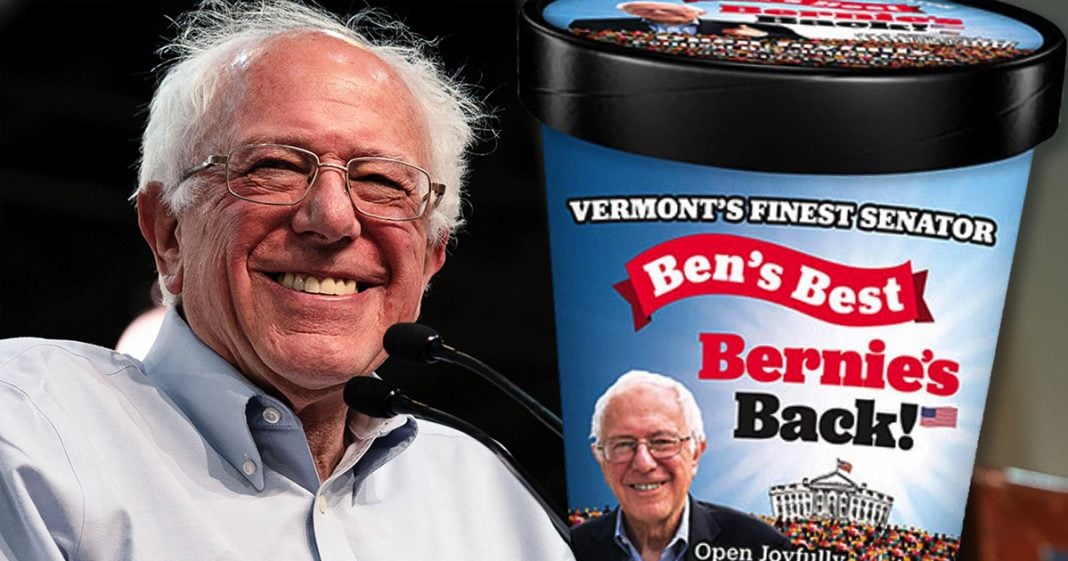 Ben & Jerry’s ice cream has been a longtime supporter of Vermont Senator and presidential candidate Bernie Sanders, and they are once again getting into the political arena to support Bernie with a new flavor of ice cream called Bernie’s Back. The Vermont ice cream company is putting politics on the menu, and co-founder Ben Cohen talks with Ring of Fire’s Farron Cousins about the inspiration for this new Bernie-inspired flavor.

Sign up to win a pint of Bernie’s Back ice cream at justiceinallitsflavors.com

Farron Cousins:                  Several years ago, we spoke with Ben Cohen here on Ring of Fire. Ben, as you probably know, is the cofounder of Ben and Jerry’s. And at the time we were talking about a new flavor called Bernie’s yearning. Well, Ben Cohen is back with us again today as Bernie Sanders campaign is absolutely taking off. And Ben has a new flavor of Bernie Sanders inspired ice cream that he’s going to share with us here today. Ben, welcome back to Ring of Fire. It’s great having you on here.

Ben Cohen:                            Well, you know, Bernie is back and he also has a really stiff backbone. This guy ain’t gonna get pushed around. So, it’s a little bit of a double entendre because there is actually a butter toffee backbone that I personally molded with these hands into the shape of a spine. And, so the top of this ice cream is kind of that same huge chocolate disc that represents all the wealth that’s been going up to the top 1% over the past 10 years. The backbone represents Bernie’s steadfast consistency, his determination over the last 40 years of his political career. And the base ice cream is a hot cinnamon, which is, it’s, you know, it symbolizes the political, his political revolution holding politician’s feet to the fire. But the amazing thing about the hot cinnamon flavor is that you take a spoonful of it and you’re back in your childhood sucking on an atomic fireball. I mean, you did use to suck on atomic fireballs I trust.

Farron Cousins:                  You know, we, we’ve seen obviously, you know, throughout this primary so far during the debates, Bernie’s absolutely out there just nailing it at every possible opportunity. He’s doing phenomenal drawing these massive crowds, you know, to, to speeches, meeting with people. And, and I gotta say one of the things that I’ve found to just be one of the most inspirational things I’ve seen from him so far was, you know, week and a half ago, whatever it was when he went to Canada, you know, with the caravan of people to buy the insulin. It wasn’t just about let’s go get cheap medicine. It was sitting on the bus with them, listening to their stories and understanding, understanding that’s the key. Because that’s something we’re not seeing a lot, among a lot of candidates just in general in politics is oh, they, they, they hear the problems, they hear the problems. They don’t quite understand it the way that I think Bernie Sanders does.

Farron Cousins:                  And what we’re seeing so far right now, obviously a lot more momentum behind him then we had in 2016. People know who he is now. They know what he’s about now. They’d been paying attention for the last four years and they like what they see. I mean, when you look at the comments actually of the people who commented on the Joe Rogan video that I guess just came up yesterday, people said, wow. You know, I, I had thought he was radical, but listening to him, this actually is perfect. This makes sense. These are not crazy ideas and crazy plans. Thank you for introducing me to this. And I think part of the reason people thought it was crazy and radical is because even this, you know, left leaning corporate media is out there saying, well, we can’t do these things. These are, these are crazy ideas. We can’t do what everybody else in the world has done, so don’t even bother. But people when they hear it, they realize, yeah, this is the real deal and this is where we have to go as a country.

Ben Cohen:                            Yeah. I mean, Bernie’s vision consistently from the beginning has been, what would our country look like if it was run for the benefit of regular everyday people instead of corporations and the ultra wealthy? Instead, instead of the people who generally finance politicians campaigns. I mean, you know, because of the absurd campaign finance system that we have in the country that, you know, Bernie was the first guy to essentially go up against and say, hey, I’m not going to take any of that. But because of that absurd, you know, finance system, the politicians, they don’t represent their constituents. They represent the money. They represent the people who finance them. I mean, you know, there’s been this joke about, you know, we should, we should force all of our politicians to wear NASCAR jumpsuits with the logos of the corporations that are sponsoring them. Because that’s the reality.

Farron Cousins:                  Well, and the thing I love too is we also, earlier this week, we got the report, you know, all the billionaires out there funding some of these Democrats that have given money. Bernie standing there with a whopping zero billionaires supporting his campaign. And I love that. I love to see that because we don’t need anymore bought and paid for politicians. We don’t need people who go out and do a closed door fundraiser that costs $10,000 a plate. We need somebody like the maps from the New York Times that showed, look how many small donors he has. Especially, I was shocked that my area right here, one of the reddest parts of the state of Florida, it was a pretty big Bernie donor area and I know it wasn’t all from me.

So we’re, we’re doing pretty well. We, we like him even in these red areas and that’s something I think gets overlooked. And I think it’s something people aren’t taking seriously enough because if you want to get, you know, enough people from the the right to come over and vote for you, he’s got the issues. They like these things and they, they’ll give him money, they’re supporting him and it could be absolutely transformational.

Farron Cousins:                  Right. It makes a lot more sense than, you know, to focus on maybe getting 50,000 donations across the country versus, you know, 10 donations from a room full of millionaires. You know, one of those is a heck of a lot more powerful. And to bring it full circle, that’s a lot what Bernie’s Back is about. That’s, that’s the atomic fireball part of it. You know, that’s, that’s everything else in this country. People burning for change and that’s why we need Bernie. So real quick here, tell us where we can get this ice cream, because as far as I know, it’s not going to be in stores, right? This is going to be a special product.

Ben Cohen:                            Right. You get it on through a raffle and you sign up at justiceinallitsflavors.com. You know, that’s kind of like a, you know, I tell people that before Bernie, I used to be the most famous guy from Vermont and you know, now it’s Bernie. I say ice cream is good, but a president of the United States who truly believes in justice in all its flavors, that’s euphoric!

Farron Cousins:                  Well, hopefully everybody who wins this ice cream in this raffle, hopefully it’s something they sit down to and eat during the inauguration. That, that’s the goal here.

Farron Cousins:                  Sounds wonderful. Ben Cohen, cofounder of Ben and Jerry’s. The new flavor is Bernie’s Back, justiceinallitsflavors.com. Ben, always a pleasure talking to you. Thank you very much.