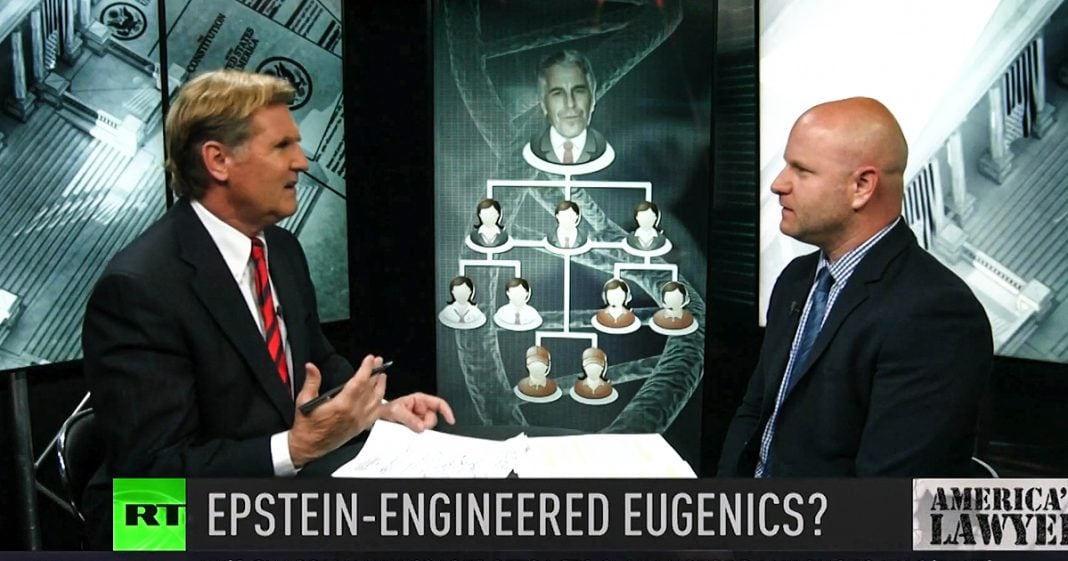 Via America’s Lawyer: Mike Papantonio and Trial Magazines Editor Farron Cousins discuss a DECADES-old plan to ‘elevate’ the human race through selective breeding at Jeffrey Epstein’s New Mexico estate, hatched by the sex-trafficker himself alongside a cohort of world-renowned scientists.

Mike Papantonio:             Last week it was reported that Jeffrey Epstein had been working with scientists to figure out a way to spread his ugly genetic material across the entire human race infecting all of us like a plague. Joining me to talk about this is Farron Cousins with the trial lawyer magazine. Look, this is, we’ve seen this before. We saw this with Josef Mengele in the Second World War where he wanted the Nazi Arion race to dominate the world. This is race purity is what he’s after and if you really drill down on what he’s saying is he wants a race that is a nation of pedophile sociopath’s because that’s what he is.

He’s a narcissistic, pedophile, sociopath, probably psychopath. I mean there’s some, sometimes the distinction, you know the distinction between sociopath and the, and the, and the psychopath he has, he has a combination of the two. But tell us about this story. It’s almost too crazy. Every week there’s another story and you go, okay, I’m tired of Epstein, and then you see another story. Go ahead.

Farron Cousins:                  This is one that that really you would think is satire, just from seeing the headline. But knowing this man’s history, this is absolutely true and what we found out just in the last week or so is that for the last several decades, Epstein has been working with some of the most high profile on the planet. Really. I mean Stephen Hawking among the scientists, he was trying to lure into his project, but he wanted to go down to New Mexico and create what they’re calling a baby ranch and he would impregnate women that he would hold at his compound or whatever you want to call it. It sounds like a compound to me and he would impregnate them other, you know, well to do people, scientists would come and impregnate them and only, you know, specific people’s DNA would survive in this new race that Jeffrey Epstein wanted to create.

Mike Papantonio:             You know, Gorgeous, smart women. That would be part of the other side. But here, here’s the truth. When the scientist that he was talking to, and this great article that was done by New York Times. It was really is well done. When they were talking to these scientists, the scientists really told us a lot about Epstein in their comments, they said he wasn’t very smart. Some of them, basically he’s a stupid, stupid character with harebrained ideas, low intellect. That was what they took away from him. They said his, his ideas were so harebrained that in his delusional mind he couldn’t even con, he couldn’t even connect how delusional it was. So, so what, but what he, there’s another part of this and that is that we’ve seen the same thing happen with Epstein with these scientists that we saw happen in Hollywood and we saw happen up on Wall Street in New York where he starts spreading money around.

Farron Cousins:                  Right. And a lot of these scientists even admitted, you know what? We were hoodwinked. We were actually blinded in a sense by the money because look, it’s hard to get scientific projects funded, especially when you’re chasing what a lot of scientists would call the pseudosciences. You know the cryonics, the Eugenics, which is what Epstein wanted. So he can dangle this money in front of these scientists. Say, listen, I know you want to work on your project. I’ve got the money. You help me with this. I help you with that. Also, I’ve given over $6 million to Harvard. I’ve got the connections there. Everything you need, just come with me and I’ll get it for you.

Mike Papantonio:             Harvard’s all in. Harvard is supplying these scientists to him because he’s willing to give Harvard money without ever asking the question, what kind of low wind, rent freak are we dealing with here? He actually wanted to have his brain and his penis cryo, he wanted a cryo process with his brain and his penis. So when they come up with a way to clone, then they’re going to be able to clone these body parts for him. I’m not making this up. I mean, and the people who reported it didn’t make it up. There’s actual documents that show this is what this freak wanted to do. Who’s palling around, by the way, with Bill Clinton, who’s palling around with the Hollywood A list that we’ve given the names in the past. It’s startling. Give me your take.

Farron Cousins:                  What, what is it about this man that makes him think anything about him is genetically superior is what was what I wonder. I mean, he looks like he’s from a museum exhibit from early man. But, but, but seriously though, what he’s talking about, what he wanted to do is obviously it’s very dangerous. It is a little bit elitist and there is a little bit of, you know, bigotry that comes along with it, thinking that you and your select few people are better than the rest and you should be the ones to spread your genetic material. I mean, this is straight out of the history books from World War ll.

Mike Papantonio:             Well, you can, you can bet it didn’t involve minorities. It didn’t involve anybody that didn’t look like him. And again, I, I kinda, you know, you look at this guy and you go, well, I don’t, you know, is this what we want? Who knows? This is, we’ll follow this story as it continues.