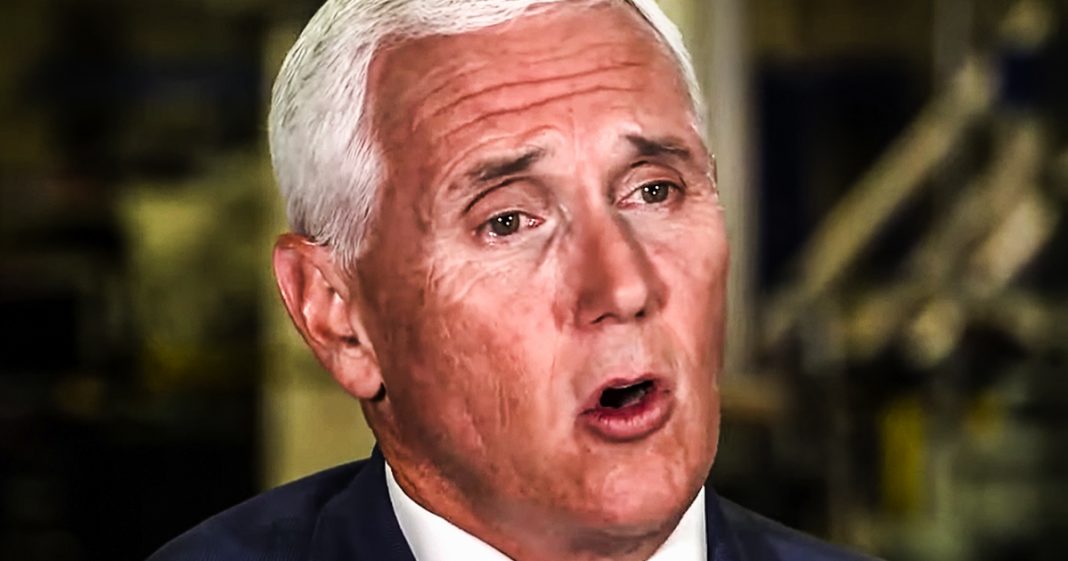 Vice President Mike Pence really needs to choose his words a little more carefully, as earlier this week he told a group of anti-LGBTQ followers that they needed to spend less time on the Internet and “more time on your knees.” He was obviously oblivious to the double entendre that he dropped with that phrase, but luckily the internet let him have it. Ring of Fire’s Farron Cousins discusses this.

Earlier this week, vice president Mike Pence was giving a speech to this Alliance Defending Freedom group, which is actually the anti-LGBTQ group behind the baker court case. And during his little spiel to this anti-LGBTQ group, Mike Pence wanted to give them a little bit of advice on how to ignore the people criticizing them online. And he said,

“No. 1 is, spend more time on your knees than on the internet… Forgiveness is a great gift.”

I mean, obviously people on Twitter were very quick to jump in and point this out and make fun of him and laugh at him because that’s what Mike Pence deserves 100% but there is actually a bigger underlying issue here. What we have here in the United States, other than a completely a tone deaf vice president is a vice president who thinks that it’s totally okay to discriminate against others to persecute them for who they are. That’s what his anti-LGBTQ feelings are all about. He hates people because of how they are, and he’s telling this group that it’s okay to do that. Ignore that people online calling you a bigot and telling you that you are in fact the horrible person you are. By the way, Mike Pence says, just ignore it. Just be who you are, be your hate-filled selves and go around thinking that you’re better than everyone else and that these people are going to hell because they’re not exactly like you because let’s cut through it. Right?

This isn’t about, oh, my religion says it’s bad. No, these people aren’t like you, so you think they’re evil. They don’t have the same belief set as you, so you think they’re evil. They may not be attracted to the same gender that you are, and therefore they are evil. They may worship a different God than you do, and therefore they are evil. And Mike Pence, with his weird as his comment was, was defending these people saying that this is an okay way to be. The second highest office in the land folks we’re one golf accident away from having President Mike Pence. And can you imagine the horrible anti-LGBTQ policies we’d get from him? Now admittedly, we’ve gotten horrible ones out of Trump as well, and Trump is filled with hate, much like Mike Pence. And to be honest, I think that’s why those two have made such a good pair. They may seem like polar opposites on the surface, but inside they’re both filled with the disgusting, bigoted version of hate that has no place at all in the United States.