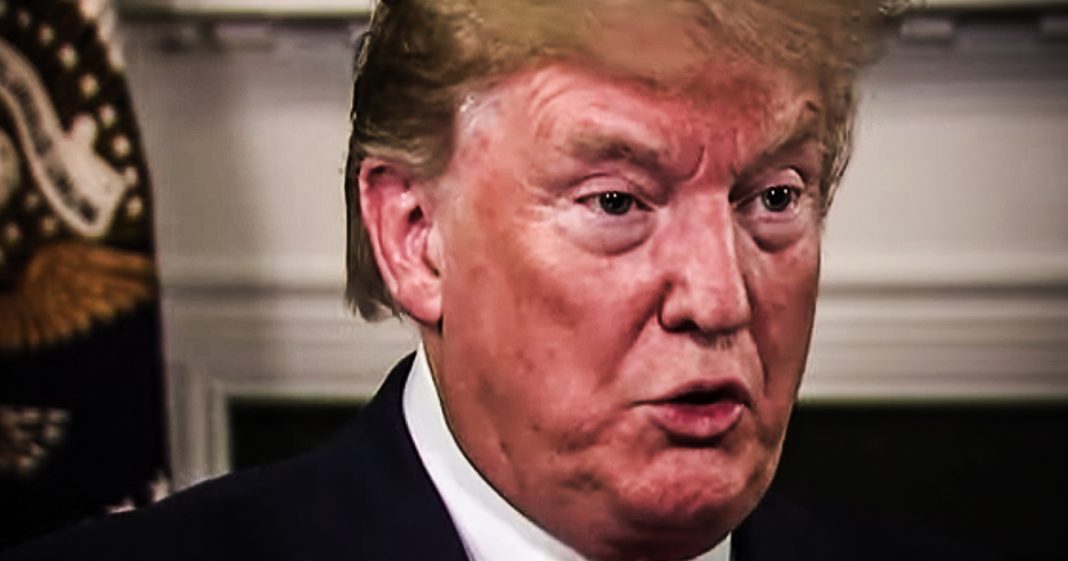 Goldman Sachs circulated a memo to their top investors on Monday warning them that Donald Trump isn’t likely to reach a trade deal with China before the 2020 election, and he certainly won’t end his trade war without that new deal. This means that they have to dig in their heels and expect a major economic downturn as a result of the ongoing trade wars, and they’d also better prepare themselves for a new administration if the dummy in the Oval Office doesn’t wise up. Ring of Fire’s Farron Cousins discusses this.

Wall Street is kind of freaking out right now, and rightfully so. I mean, they’re having a pretty bad week. They had one of the worst Mondays in history, not quite as bad as the Monday we heard about in history books, but it was still statistically one of the worst days the stock market’s ever had. And so on Monday, Goldman Sachs sent a note out to their clients, warning them that Donald Trump isn’t smart enough to end this trade war prior to the 2020 presidential election, which means you better dig in your heels for the long haul because once these new tariffs go into place on September 1st we’re all pretty much going to get screwed pretty hard on this, not just the big banks, not just investors, but pretty much everybody in this country, and there’s not much we can do about it because Donald Trump doesn’t seem to understand how bad his trade war is.

In short, Goldman Sachs was dancing around trying to find fancier ways to say that Donald Trump has a complete moron end. He doesn’t know the damage that he’s causing, not just to this country. By the way, but also to his reelection and Goldman Sachs and other Wall Street banks are actually worried about that because they know that if Trump does enough damage to himself, they’re more than likely going to get a Democratic president, hopefully in the form of a Bernie Sanders or Elizabeth Warren that’s going to come to Wall Street and make some very serious changes and make some very serious changes to the tax code that’s going to cost these wealthy elite quite a lot of money. And that’s what they don’t want. So this wasn’t so much a warning to investors that, hey, things are going to get rough. It’s, hey, use your power and your influence to make this man stop.

So he doesn’t cost himself the 2020 election. Now it gets worse. You also, and this is the quote from the bank, he said, well, we had previously assumed that president Trump wouldn’t be, we’d see making a deal as more advantageous to his 2020 reelection prospects. We are now less confident that this is his view. Trump perceives the US economy is strong enough to withstand even 25% tariffs across the board on everything we import from China. And that was a actually from Yardeni Research and Investment Advisory Company. And then you got Mark Zandi, chief economist at Moody’s who came out the same day and said, this recession odds probably go over even. And I think it would be pretty hard to avoid a downturn regardless of what the Fed does. So not only is Donald Trump going to screw over consumers and investors, and essentially everybody in this country because of his little a temper tantrum he’s thrown in for China here, but were had to do a recession and economic downturn.

And at this point, even if he slams the brakes on this trade war right now, which he won’t do, but even if he did, it’s unlikely that that is going to be enough to stop this downturn from happening. Now, here’s the kicker, folks. If the Democrats do when in 2020 and by then the economy has not yet crashed, but is on the verge of crashing. And it happens during that Democrats, uh, term, they get blamed for it. Not all the horrible policies that Trump has put in place that sent us down this path. The Democrat will get blamed for it. So mark the day, mark this point in the video, because I’m telling you, that’s something that’s going to happen. Whoever takes over is going to be blamed for that, even though it was 100% Donald Trump’s fault, the economist warned us ahead of time. The bankers warned us ahead of time. We know it’s coming, and I guarantee you Trump is praying that it happens if a Democrat beats him, because then he’s going to go out and tell us. See, I told you he shouldn’t have jumped ship. You should’ve stuck with Trump. I was the best. They’re the worst. Those things are going to happen. So just get ready for it. But also don’t ever forget that everything that’s going to happen, all the bad things these economists are predicting it’s 100% because of Trump’s policies.