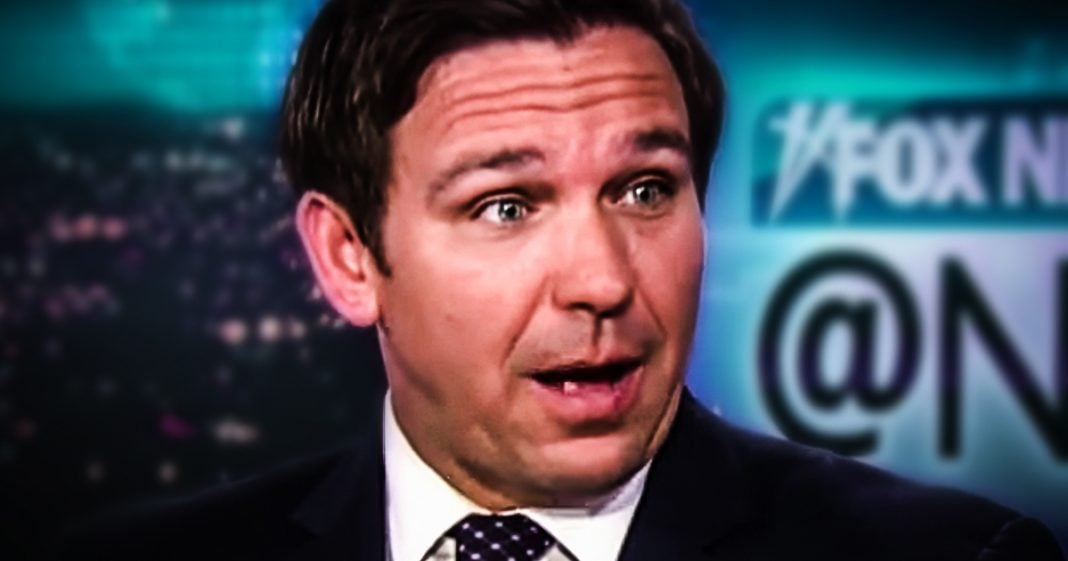 Republican Florida governor Ron DeSantis has ordered the state to begin a criminal probe of the disgustingly lenient prison sentence that Jeffrey Epstein served nearly a decade ago. This move is surprising, considering the fact that any probe into the plea deal is going to involve an investigation of Trump’s former Labor Secretary Alex Acosta who arranged the deal. Ring of Fire’s Farron Cousins explains why this is a good, albeit surprising, move by DeSantis.

Some good news out of the state of Florida for once where our Republican governor, Ron DeSantis has decided that he is going to have the Florida Department of law enforcement open an investigation into what the heck happened with the Jeffrey Epstein prison sentence and plea deal that he received a little more than a decade ago. And this is a good move. And to be honest, it is completely shocking that our Republican governor, who is an ardent Donald Trump supporter would do this because any reopening of this investigation, any examination of what took place ultimately does involve both Donald Trump and his former labor secretary, Alex Acosta, who was the prosecutor who worked out that plea deal. So for this hardcore Trump supporter to reopen this investigation launch a new criminal investigation is very odd because he knows his buddies are going to get roped into this in some form or fashion.

But nonetheless, here’s what’s happening. Ron DeSantis is actually responding to the massive public backlash and the horrible spotlight shining on our state right now with regards to the Epstein plea deal. He is responding to the fact that the women who were the victims here, we’re not even allowed to know what that plea deal was, which sparked a ton of civil lawsuits and that actually helped to reopen this case. Those lawyers fighting on behalf of these women. They’re the ones who have made this possible. And so now DeSantis says, well, you know what? Let’s take a closer look at it. Let’s look at what happened down there at the sheriff’s office who was supposed to be monitoring him during his 12 hours away from the prison six days a week. But it appears that they failed because according to one of the lawyers for one of the victims, Epstein continued the abuse even while he was on that work release program.

Now, the sheriff’s office down there in Palm Beach said that, oh, no, no, no, no, that’s totally not possible, but we’ll do an internal review to see, you know, maybe what went wrong. Oh, an internal review. By the way, that actually never happened. And so now our Republican governor again has said, listen, this is ridiculous. This is nuts. We failed. We look like fools, we’re going to fix this. And if it means taking down people like Alex Acosta who worked out this deal as the prosecutor, then so be it. You know, maybe Ron DeSantis when he was running for governor here. Not that I liked him or support him in any way, so don’t misconstrue this, but maybe he was trying to hoodwink Florida voters a little bit, you know, with his little disgusting ad where he had his infant daughter teaching her to build the wall. Maybe that was all for show. I don’t believe that one bed. I think DeSantis is absolutely or hardcore Trump supporter. I just don’t think he understands how deeply involved his little mentor is in this entire Epstein saga. Or maybe he thinks the news will be worse for Bill Clinton than it will be for Trump. And that’ll kind of shield Trump from most of the scrutiny. But either way, whatever his reasoning is, whatever his motivations are for this, this is a good move. And I do support this move and it’s something that has been desperately needed again for well over a decade.