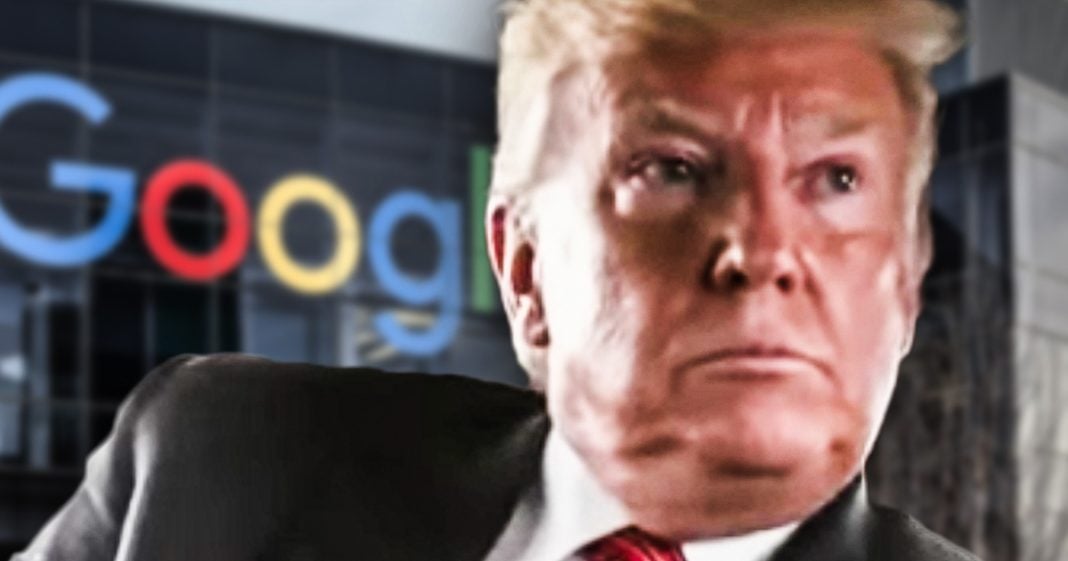 A fired Google employee who clearly has an axe to grind is making the rounds on conservative media, claiming that the company has some kind of inherent anti-Trump bias and that they are burying him in their search results. All it takes is a quick Google search to confirm that Trump is still at the top of those searches, but this crackpot was able to convince Trump that this conspiracy theory is real. Ring of Fire’s Farron Cousins discusses this.

You know, it doesn’t take Donald Trump very much to buy into a conspiracy theory. He told us just yesterday that he had just had a wonderful conversation in the oval office with the heads of Google, the people at the very top of Google who assured him nothing screwy is going on at the tech company with regards to burying results for Donald Trump. He believed him and then unfortunately the president turned on Fox News shortly thereafter where he saw a disgruntled Google employee by the name of Kevin Cernekee, former Google engineer who said that, oh yeah, Google is 100% censoring results for Donald Trump trying to bury him and they have a plan to make him lose in 2020 that’s pretty damning material. Right, and it seems like the kind of thing that, oh wow, that that should be investigated. Unfortunately, there’s zero evidence whatsoever to back this up. As I mentioned, Cernekee is a disgruntled Google employee.

He’s now being propped up by the group that has zero credibility project Veritas because they’ve been trying forever to convince us that there is some kind of grand conspiracy taking place with these tech giant censoring conservatives silencing their voices, stifling their search results. None of it is true, but it makes for good talking points and it gets the right wing all riled up. And now they’ve got Donald Trump believing this ridiculous conspiracy theory as well. Here’s what Trump tweeted out. He said,

…I watched Kevin Cernekee, a Google engineer, say terrible things about what they did in 2016 and that they want to “Make sure that Trump losses…

So that in a tweet on Tuesday after watching this man on Fox News, he is also quoted, uh, Peter Schweitzer, uh, the head of a conservative think tank linked to conspiracy theories against Democrats according to the agents, friends press and Schweitzer, much like Project Veritas also has zero credibility.

Shysters books, his articles, his talking points have all been proven to be completely false and absolutely fabricated. But he is also one of the people out there right now saying that Google is somehow punishing Donald Trump. Do you know the easy will, easiest way to test and see if Google is in fact punishing Donald Trump. Google, Donald Trump, Google president of the United States. All you’re going to get are Donald Trump’s search results. Google is making a killing off people searching for Donald Trump. They’re also making the killing off the Trump campaign, buying ads. They, they love him. They really do. Just like the media outlets love him. Even when they talk about how much they hate him because they make a ton of money off of talking about this man every day, but Trump, maybe he wants some Google cash for his campaign. Maybe other conservatives want Google cash. They’re already getting it, but they want more of it, so they create these insane conspiracy theories that again, the president’s now buying into show that they can go back and threaten the companies and say, listen, we’re going to have to put strict regulations on you.

We’re going to have to look over your shoulder every step of the way. That’s where we’re headed. What can you do to make that not happen? And Google executives will say, well, how about we write you a check for your campaign? That is what is taking place in this country right now. That is why conservatives are pushing these bogus conspiracy theories. Matt Gaetz, a couple of weeks ago on Twitter, said, there’s no results on Google when you search for Jeffrey Epstein and Bill Clinton. Why are they censoring that? And, uh, which I pointed out to him, just Google Epstein Clinton, and there’s all the information you could ever want. Matt Gaetz got mad because he didn’t understand how Google worked. He didn’t know how to do a search, but it’s all right there. So maybe these conservatives do think that Trump is being censored or that they are being censored, or that certain news about Democrats is being censored. But if they do think that it’s because they’re not smart enough to know how to perform a simple internet search.