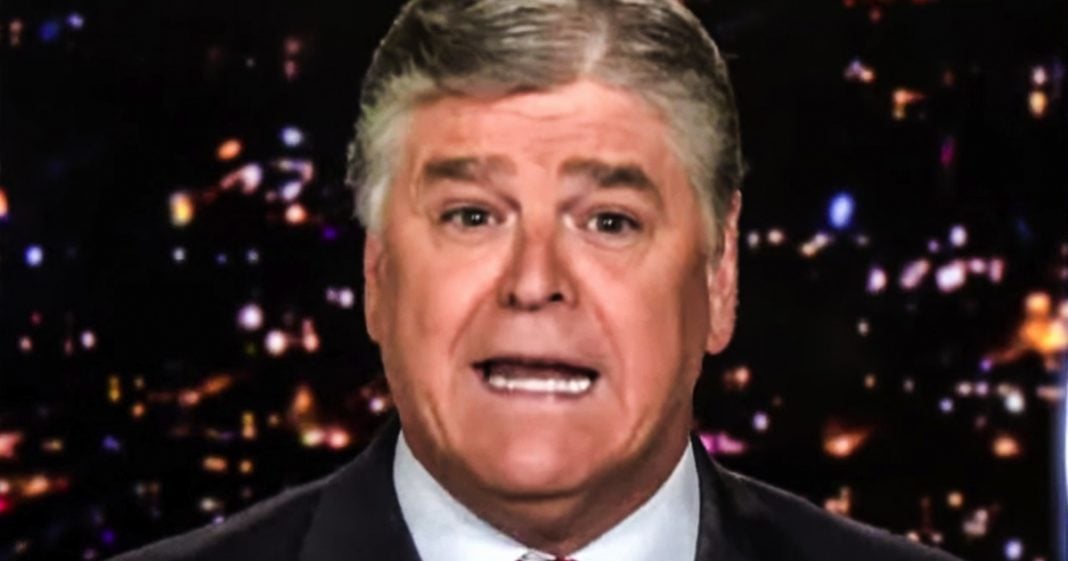 Unofficial Trump advisor Sean Hannity says that we need armed guards at nearly every public place in this country in order to protect ourselves from ourselves. Rather than addressing the real issue – the abundance of weapons of war – he is telling us to forfeit our freedom and put our trust in the people who keep killing unarmed civilians. Ring of Fire’s Farron Cousins discusses this.

Fox News host, Sean Hannity, believes he has the solution to keep Americans safe from all the crazy people out there in this country with guns and he laid it out very clearly for us Monday night. Here it is.

Sean Hannity:    I don’t think it’s because I thought of it. But let’s, let’s stop school shootings; we’ll start there. Let’s stop mall shootings; we’ll start there. I‘d like to see the perimeter of every school in America surrounded, secured, by retired police, which you are. Retired secret service, which you are. Military, and I want guys to donate 15 hours. I think we could cover every school, every hour, every day. Add a metal detector and I think we’re gonna have safer schools. Have one armed guard on every floor of every school. All over every mall, the perimeter and inside every hall of every mall. Now, that gives us an instant response opportunity that we normally wouldn’t have.

That’s right, folks. Instead of actually addressing the real issues, you know, what’s making these people go out and do this and of course what they’re using to do these things. Let’s just put armed guards every single place in this country where the public gathers, maybe it’s a school, maybe it’s a mall, maybe it’s a church, maybe it’s your office. Wherever it is, we’re just going to live in one big giant police state here in the United States. Sacrifice our freedoms because we continue as a country to act like we don’t know what we can do to solve the problem. We know what we can do to solve the problem, folks.

We can simply ban assault weapons. Institute at government buy, a buyback program, get them off the streets, and then suddenly the chances of these things happening go down, right? Other countries don’t have these problems and other countries don’t have these weapons on the streets. That, that, that’s a clear link that we need to start looking at rather than saying, all right, if you’re a retired police officer, go grab your gun and go stand in front of this school for eight hours a day. Anybody comes in, you lay them out. That’s not how this is going to work. Now, here’s the thing. I am actually going to agree with Sean Hannity on one point here. The metal detectors, that I’m okay with. I am actually okay with that. If we want to put them in movie theaters, you know, if we want to put them in the entrances of malls, that’s going to be a hell of a line to get in, but you know what, that may be something we need to do.

I hate to even say that, but if we’re not going to address the real problem, if we’re not going to get these weapons of war off the street than metal detectors, at the very least we can do when you have these big places where people congregate in large groups. You go to any theme park here in the United States, you’re going to go through a metal detector. You’re probably going to go through a bag check as well. That’s why you’re not seeing assaults and shootings happening at these events. Same thing with sporting events. Same thing actually if you go to any convention, Republican or Democrat, you’re going to go through one of these things and it helps to keep them safe, but we wouldn’t have to necessarily go through as many security checks all over the place if we simply address the root cause and that is the guns.

But Sean Hannity would rather ignore that, would rather repeat NRA talking points and say that instead of getting rid of guns, let’s put more guns out there. Even though every study that’s looked at, it shows us unequivocally that if you put more guns out there, more people die and that is exactly what would happen. We have seen these trigger happy police officers all over this country for the last decade. Absolutely murdering unarmed suspects sometimes for no reason. The last thing we need is these crazy Rambo wannabe retired cops standing in our schools fully armed. Just hoping that something goes wrong because if they’re there to hope something goes wrong, then I can promise you something’s definitely going to go wrong.