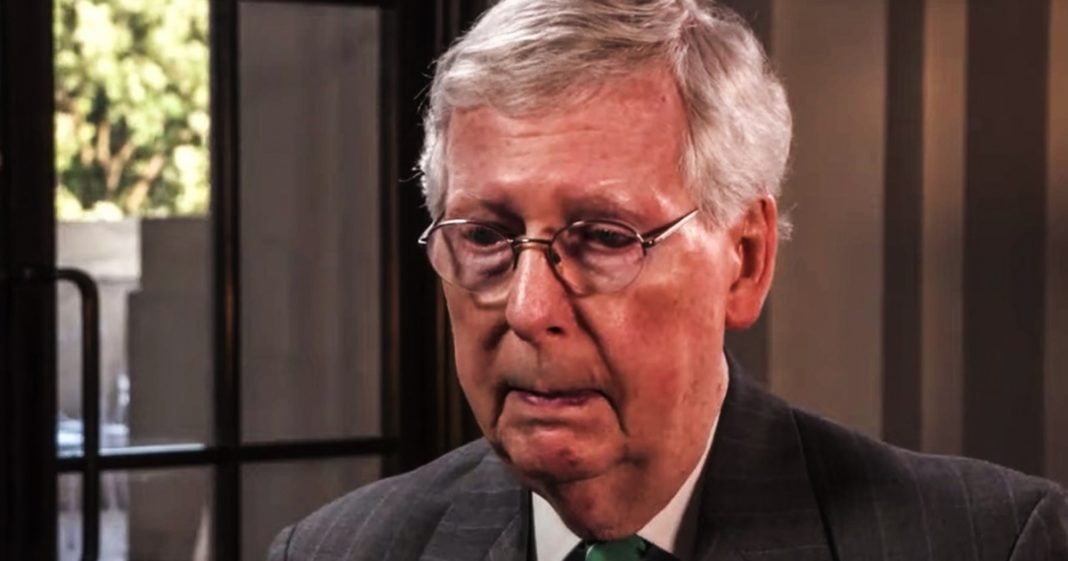 CNN had a hard time finding Republicans willing to come on their network on Sunday morning, and things only got worse over the next 24 hours. According to the network, only ONE Republican out of 50 that they asked was willing to talk to them about the events that transpired over the weekend, showing how truly cowardly the Republicans are in this time of crisis. Ring of Fire’s Farron Cousins discusses this.

On Sunday morning, Jake Tapper told us that CNN had reached out to several different Republicans and not a single one of them was willing to come on the air and talk about what had happened over the weekend. Over the next 24 hours, things actually got so much worse for CNN in terms of struggling to get guests. I’ll let them explain it themselves. Here it is.

Host:    “I think we have the list. We asked 50 GOP lawmakers, 50, just to come on the air and talk about the issue. One said yes. I’ll be speaking to him later. You know, forget about votes, they don’t even want to talk about it in public. What changes that in your view?”

Guest:    “Well I think that, you know, this is your job. Your job is to get out and to make sure that you are voicing your opinions, and you are letting people know what you are willing to do.”

You’ve got Mitch McConnell who, you know, depending on how you look at it, conveniently broke his shoulder this weekend. So he really can’t go on the media right now, but they’re not hiding from all the media. And that’s the point here. They’re only hiding from the media that’s going to ask them tough questions. Plenty of these people, including some of those that CNN asked to come on Sunday morning, appeared on Fox News later that day and they were given nice little softball interviews where they could go out there and, you know, blame homosexuals and Obama and, you know, atheists for these shootings. And the video games, and the movies and yada-yada, all that crap. But they won’t go on any network that might actually ask them, hey, why aren’t you doing anything on gun control? Why are you blaming these imaginary Boogie men out there? Instead of saying one that the president is using racist language and inspiring people to commit these horrible atrocities and two let’s get these weapons of war off the street because believe it or not, that’s what CNN actually wants to ask them.

That’s what any real network would want to ask them. Fox News isn’t going to ask them those questions. Fox News is just going to say, can you tell me how many gay people influenced this guy? Can you tell me how many hours a day this guy spent playing video games, how that affected his brain and now he’s mentally ill and how the presidents language had nothing to do with any of this. And we’ll pretend that manifesto doesn’t even exist. That’s what Fox News does and that’s why Republicans continue to go on. They’re not just on this issue, but on any issue because they don’t care if these people lie to their faces because it’s the job of the Fox News anchors to go out there and lie to our faces. They’re just basically cutting out the middle man. Just let the politician directly lie to you. CNN wanted to ask good questions, most likely. Not absolving CNN of any of their past sins or even saying they’re a decent network now, they’re not. They’re, they’re pretty bad majority of the time, but on this issue. They wanted answers and they wanted answers from the people who are in power to make solutions.

And those people ran away because Republicans know that at this point they don’t have a leg to stand on. They helped cause this, by doing nothing after each and every mass shooting that we see in this country, and they’re hoping that maybe enough time will go by to where they can just quietly slink away, not have to answer these tough questions and the outrage will have faded and Americans will have moved on and forgotten all about this. So Republicans can once again go back to their NRA fundraisers, cash their NRA checks, run for reelection, and then pretend that it’s actually those pesky Democrats who are blocking any meaningful gun reform legislation in this country. Mitch McConnell actually already laid out the framework for the blame game yesterday in a little post on Twitter said, you know, we’ve got to have it bicameral. We got to have it by partisan. Democrats have to work with us on it. And if they don’t, we’re not going to be able to do anything. Republicans, the only thing they want to blame right now is the Democrats. And they’re already putting that in motion. But Democrats and a majority of people in this country understand it’s about the guns. And until Republicans address this, they’re going to have to continue hiding from the media after every single shooting that happens in this country.