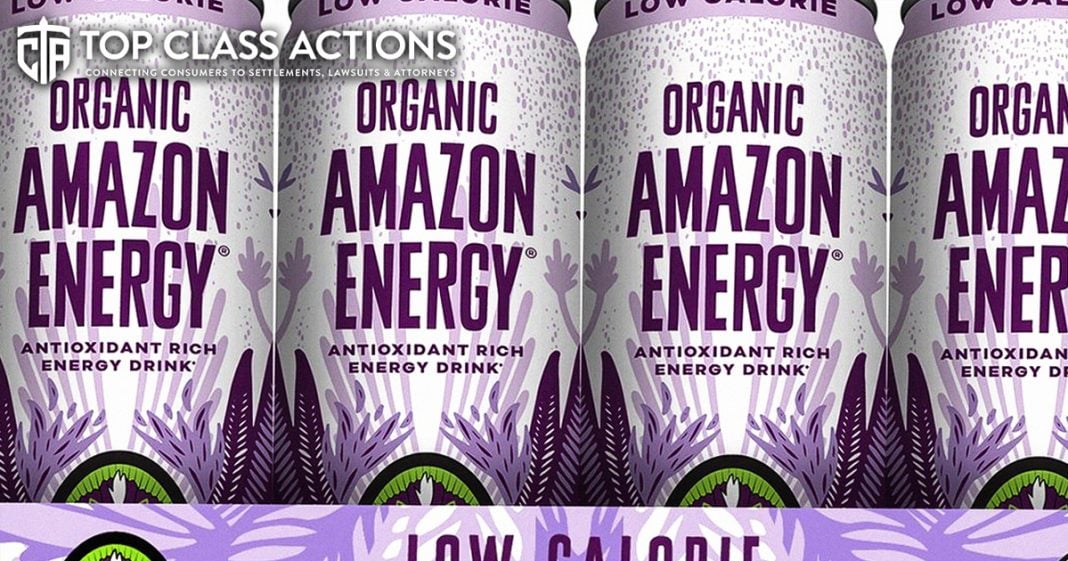 A class action lawsuit challenges Sambazon Inc.’s use of the term “clean caffeine,” to advertise their Amazon Energy drinks, as well as the company’s claims that the products are “antioxidant rich.” The Amazon Energy class action lawsuit was filed by Steve Altes who says he purchased Amazon Energy drinks about four times within the last four years, most recently in February 2019. Allegedly, he purchased the beverages because they were advertised as containing “clean caffeine” and as having beneficial antioxidants, which suggests that the product is healthier than others. Ring of Fire’s Farron Cousins discusses this with Scott Hardy, President of Top Class Actions.

Farron Cousins:                  Very few people in this country pick up an energy drink thinking that they’re going to get something that has just a ton of nutritional value to it. Most of us go to energy drinks for one reason and it’s right there in the title. We need a little extra energy. We need something to get us going. We need some more caffeine, but we don’t necessarily want to chug down a cup of coffee, so we’ll go for this tasty beverage. But one energy drink company wanted to change that. They wanted people to not only go to their energy drink for energy, but also because they claimed this stuff was good for you.

It was packed with things your body needs, including what they called clean caffeine. Joining me now to talk about this as Scott Hardy from Top Class Actions, and Scott, when I heard the phrase clean caffeine, it reminded me of all the climate change stories from the fossil fuel industry. Like, oh, we’re, we’re gonna do clean coal. Well clean coal doesn’t exist, and clean caffeine also apparently does not exist. What’s happening here?

Scott Hardy:                          Right. You have another case of a company that’s just making up new terms, trying to make them sound scientific and blatantly, according to this class action, lying to consumers about it. Saying that this Amazon energy drink by Sambazon is, is clean, gives you clean energy. Gives you that clean caffeine, so you don’t really have that breakdown and it’s made up. You know, that doesn’t actually exist, but they’re selling more energy drink because of it. And that’s what this class action is going after.

The class action is also stating that they are stating that Sambazon is saying they’re Amazon energy drink is full of antioxidants and will give you that extra good kick. But they don’t actually tell you what antioxidants are in there and how much are in there and that’s required under law. So there’s a couple of layers to this class action, which just continue to point out that Sambazon is essentially, at least according to the class action, making up new science and new facts to sell their energy drink.

Farron Cousins:                  So this one’s a bit of a two for here then. You know, it’s not just, oh, all right, clean caffeine doesn’t exist. We, we lied to you on that. But it’s also, you’re required under law to disclose your antioxidants and they’re, they’re failing to do that. They’re not abiding by the law. I mean, we’re not talking about criminal charges or anything coming against the company here, but this is, you know, this is one of the few times where we see them both, you know, violating the law and violating, you know, the rights of consumers. So the, this is a very interesting one.

And look, I mean, energy drinks, again, as I said, as I say it at the beginning here, people shouldn’t be going to those thinking they’re going to get something super healthy. And I think that’s what a Sambazon did here with their Amazon energy drink. They knew that people knew these things weren’t great for them. There’s been a lot of negative press about energy drinks over the last few years. So I, I think what they wanted to do is they wanted to capitalize and say, oh listen, we’re good for ya. We’ve got anti, antioxidants, we’ve got the good stuff.

We’ve got what the body craves and it turns out that the things that they have are things that may or may not actually exist according to science, they actually do not exist. Like their clean caffeine. So, I think they’re going to be in some trouble here. I really do. And I think, honestly, I hate to say it this way, they kind of deserve it. You can’t just make things up when you’re a company and use that as a selling point. You’re going to get popped for it every single time.

Farron Cousins:                  You know, I, I guess when it comes to energy like that, I’m going to stick to my, I guess I’m gonna refer to it as dirty caffeine, which is just a regular cup of coffee. That’s, that’s, that’s my go to. But yeah, clean caffeine, folks, let me put it this way. If it’s not something you can Google, you know, pull out your phone when you’re in the store. When you see something weird like clean caffeine, let me look that up. Please do that. You know, let, let, let’s start arming ourselves and being a little more proactive here. And that way we can put a stop to these practices, you know, before they get too far. But also just as a way to protect yourself as a consumer, try not to get duped by these companies.

Google it, you know, look it up, whatever you’ve got to do and call them on it. And also make sure you let the lawyers know because they’re the ones who can really enact some change with the way these companies market their products. For more information about this issue, please follow the link in the description of this video and head over to topclassactions.com and while you’re there, make sure you sign up for their weekly newsletter. Get all of these stories and more delivered directly to your inbox. Scott Hardy, Top Class Actions. Always a pleasure talking to you.