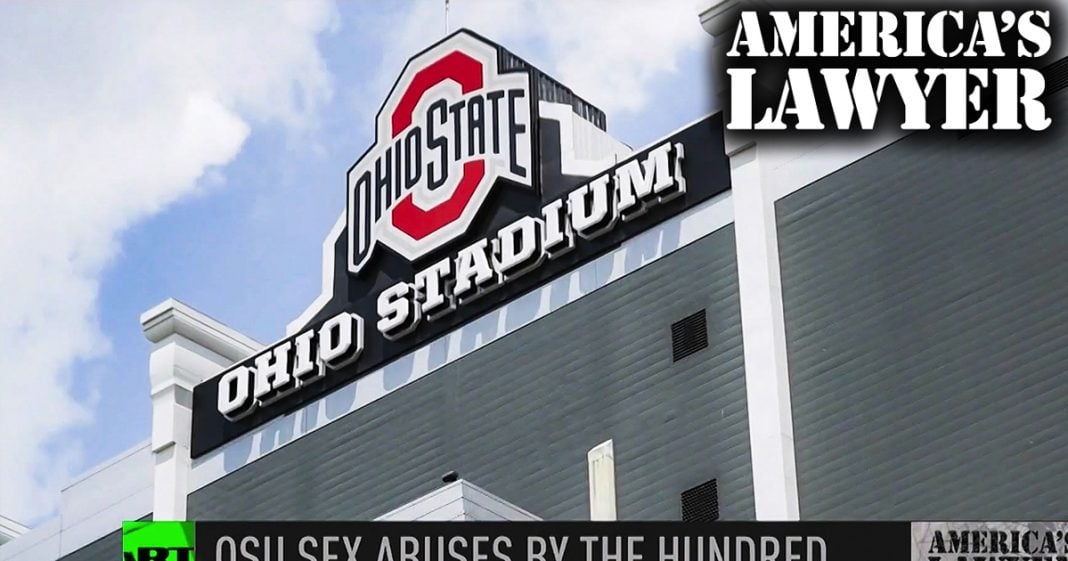 Via America’s Lawyer: Trial Magazines Editor Farron Cousins is joined by legal journalist Mollye Barrows to update us on a case going back decades at The Ohio State University. 30 more former students are accusing former sports physician Dr. Richard Strauss of sexual abuses committed during physical exams. This is just the latest addition, as accusers now total ONE-HUNDRED AND SEVENTY-SEVEN, most of whom were student athletes under the care of Strauss. Farron Cousins fills in for Mike Papantonio on this episode of America’s Lawyer.

Farron Cousins:                  30 former students at Ohio State University have filed suit against the college for failing to properly address sex abuse cases against former sports physician, Dr. Richard Strauss. This is just the latest addition to a heap of allegations that have been filed against the school by over 100 plaintiffs, most of whom were student athletes under the supervision of Strauss. Legal journalist Mollye Barrows joins us now to help break this down. So Mollye, what’s the nature of these abuses that Dr. Strauss carried out and what’s his relationship with these students or what was his relationship I guess?

Mollye Barrows:                Yes, he, he committed suicide in 2005 and I certainly don’t want to pass any judgment on that, but in light of these allegations, you can certainly see why he might’ve had some demons. So between 1978 and 1998, he was the wrestling coach, basically a student doctor, who worked at, at Ohio State University in Student Services Center in their health center there. And he’s accused so far of, I mean just the lawsuits alone, they’re looking at 177 plaintiffs. Numerous investigations by Ohio state itself, which started a couple of years or years ago. But anyway, they found that he had just literally dozens of victims inside the campus as well as outside the campus because his trail, which we’ll get into eventually extended to a private clinic that he opened up right off campus when he was allowed to retire after some of these allegations made their way to the medical board.

Mollye Barrows:                Yeah, always, that works so well. Just ask the Catholic Church, just ask any number of organizations, Michigan State, you know, what they dealt with, with Larry Nasser. But I think you, you’re seeing the same approach to protecting the institution rather than protecting the victim. And there’s a paper trail according to these numerous investigations and media reports that show that these people that were in a position to help and protect these students, other administrators and leaders within, within the university knew what he was doing.

So going back to what he did, some of these allegations say that he was known as Dr. Jelly Paws by some of the students because he groped them during physical exams. There was unnecessary physical touching. He would go into the showers with these students and take showers with them multiple times a day. And I guess when he got done showering with them, there were times when he would pull a stool up and just sit there and watch them.

And they said that it allowed other people who felt comfortable to do the same thing, to sort of open the door for them to come in. Many students left the school entirely, or went on to do other things. You’re talking about students from a variety of different var, varsity sports. I think about 16 was the total. So he, even though he was a wrestling physician to the wrestling students, he essentially saw students from all different parts of the sports academic world.

And he, he is accused of touching any variety of number of these football players, wrestlers, you name it. And that’s what you’re seeing with a lot of these lawsuits. You’ve got a lot of former student athletes coming forward and once the door opened, it really just, there was a wave of complaints and I think people are still coming forward. I mean, that’s how that representative got tied up in it.

Farron Cousins:                  Plaintiffs, you don’t get that many people abused without two or three, at least saying something to somebody else. Because some people want, you know, they do take it as I’ve done something wrong. So I don’t want to tell people, but the odds of 177 thinking that, no, that’s, that’s not going, it’s statistically impossible.

Mollye Barrows:                Criminally, even if he were still alive, he wouldn’t be able to be prosecuted. And that’s why the state of Ohio, the governor would like, and, and representatives have filed legislation that would allow us, at least students in this situation to be able to get money, monetary damages from the school, or from whoever would be held accountable, if you will, for this. And that’s who most of these lawsuits are against, it’s against the school, for not doing anything about these allegations when they were aware of them and allowing it to continue, like you said, creating an enabling atmosphere.

Statute of limitations because it is a criminal, that would be the criminal aspect of it and because the statute of limitations would have expired, the governor earlier this year called for that to just be thrown out the window. It’s so that that victims of sexual assault, not just in this case, but in other cases can have an opportunity to come forward and share these with hopes of actually being able to face their accusers and find some justice.

In this case, they’re never going to be able to face him. He’s gone. He took his own life in, in 2005 and that’s even almost adding insult to injury because if he were still alive, then at least they could face him, but they don’t have that opportunity now. He took that away. So this is their opportunity for justice, is to see if Ohio State University is actually gonna make some changes and take responsibility.

And earlier this year the president did say, I mean we’re talking numerous reports that found how so many people were aware of what was going on and just kicked the can on down the road and never did anything about it. And finally, earlier this year, the president of Ohio State said we should have done more. This latest report is shocking. They had a former prosecutor from Chicago come in and take a look at it and he said, you all knew what was going on and nothing was done.

Farron Cousins:                  Well, you know, to me it’s really interesting when we talk about the statute of limitations. We’ve seen New York extend theirs to help some of these Catholic church abuse victims, but it does need to happen in more instances. We need to expand that because when you do have these people, men and women alike, they’re reluctant to come forward at first. It takes them a long time to process it, for a lot of them to stop blaming themselves.

Farron Cousins:                  But, but there are deep psychological things that happen with cases like this and the legal system has to take that into account. Mollye Barrows, thank you very much for telling us this story.