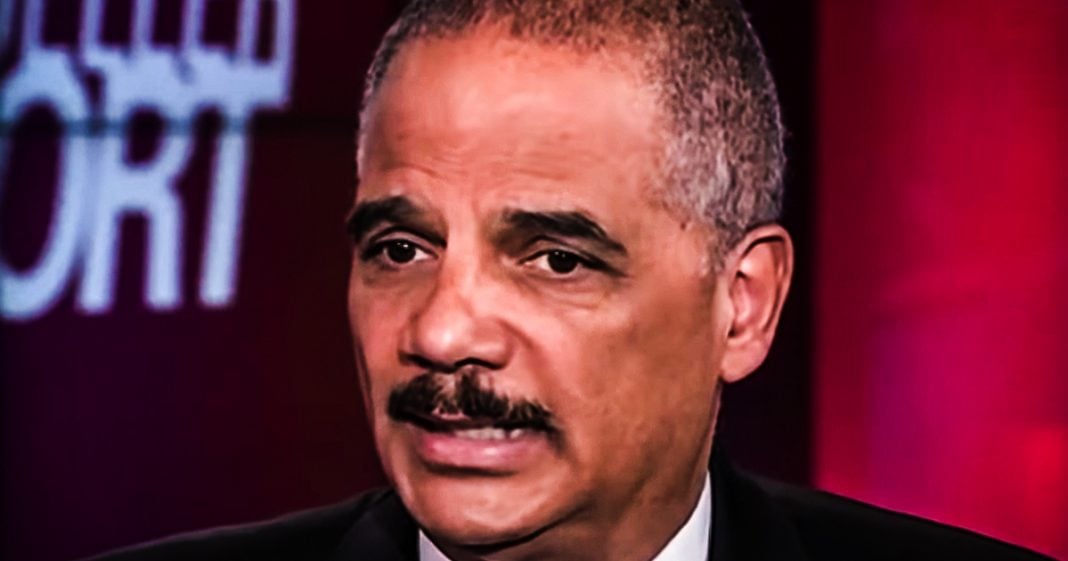 Former Attorney General Eric Holder turned to Twitter after the second Democratic debate this week to warn/beg Democrats to stop attacking Obama’s legacy as president. He believes that everyone still loves Obama and that attacking his legacy is going to end up hurting Democrats. That isn’t how politics works, and it certainly isn’t going to sway voters one way or the other in the general election, as Ring of Fire’s Farron Cousins explains.

Well, now that we’re, this week’s democratic debates are over, uh, somebody probably needs to go ahead and check on Joe Biden, make sure he’s doing okay because on Wednesday evening, everybody on that stage left and right just came after Biden and by extension Barack Obama’s legacy. And they did. And rightfully so. I mean, hell, at one point when Biden was speaking, protesters in the crowd erupted in a chant of 3 million deportations is that’s how many people were deported under the Obama Administration. Biden looked visibly flustered during that, didn’t quite know what to do with, he should keep talking or whatever. And everybody kind of went after him all night. But after the debate, former attorney general turned corporate lawyer once again, Eric Holder came to both the defense of Joe Biden and Barack Obama when he tweeted out the following

“To my fellow Democrats. Be wary of attacking the Obama record. Build on it. Expand it. But there is little to be gained – for you or the party – by attacking a very successful and still popular Democratic President.”

See Eric first and foremost. That’s not how things work, right? Uh, you should know this. I know you know this, but you know you’re trying to come to the defense of your buddy Biden and your buddy Obama and look, I like Obama as a person. I think he is a wonderful family man. He did okay on some policies as president. Foreign policy, not so much domestic policy. About half and half. Sometimes he was decent. He was okay. He wasn’t phenomenal. He had issues in his record, some of which were actually just now finding out, cause I’m not going to lie, I didn’t know people were locked in cages along the southern border during the Obama administration. Had I known that? Hell yeah, we would have been talking about it every day too. Now we do know that. So that’s a pretty big blemish on his record. Wouldn’t just say Eric Holder.

How about the fact that this is something I have said repeatedly when he announced the clean power rule. We’re going to reduce emissions by this much by putting this rule in place on these existing in new coal fired power plants. Wow. People thought, hell yeah, we’re taking on climate change right now. At the time. I also wrote a piece for the smog, looking at the numbers based on the math and found out that the number of new coal mines that the Obama administration had leased at the same time announcing clean power rule would create enough emissions to completely offset all of the emission reductions from the clean power plan. So essentially the clean power plan was a net zero benefit.

You don’t believe me? Go back and look at the piece I wrote many years ago about this. It lays out all the numbers and it’s all right there for you. It’s verifiable. Obama did not have a glaringly perfect record and yes, there are people in this country who still like him, but still liking Obama is not going to mean that people aren’t going to vote for the Democratic candidate in 2020 and let Trump continue to undo the few good things Obama did. That is stupid. If you honestly believe that you shouldn’t be out there talking about politics because you don’t know what you’re talking about. And I know Eric Holder is not a stupid person. Eric Holder is exceptionally bright. Eric Holder knows better, but Eric Holder also knows that some of the most glaring failures of the Trump administration came from him.

Eric Holder was by far the worst member of the Obama administration. This is a man who, when he came into office, absolutely 100% could have and should have prosecuted former members of the Bush administration for war crimes, for crimes against humanity, for violating the Geneva Conventions. But he didn’t. They said they wanted to look forward, not backwards. He didn’t prosecute the Wall Street bankers. He actually shut down investigations that were, uh, basically trying to find the root causes and put an end to the opioid crisis before it even began. Eric Holder’s shut that down. So maybe that’s why Eric Holder’s a little touchy about Obama’s legacy, not because he wants to protect Obama, but because the more people look at that Obama legacy, the more they realized that most of the worst parts of it are directly from Eric Holder himself.