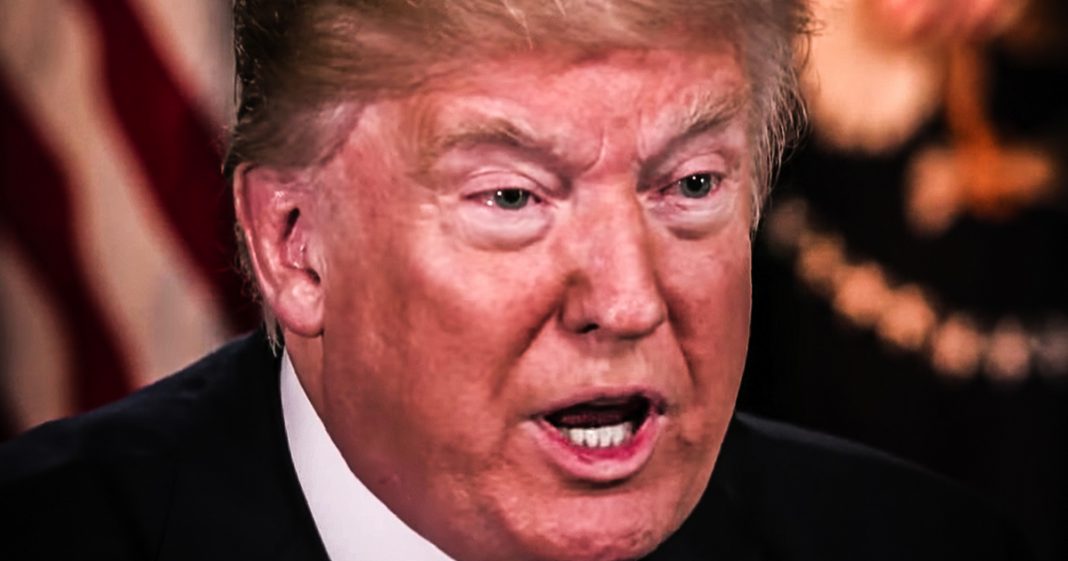 According to a report by The New York Times, White House staffers and Donald Trump aides have not been happy with his attacks on Democratic Congressman Elijah Cummings, and they think it is a bad strategy. But that won’t be enough for them to speak out against the President or to tell him to stop. These aides can finger wag all they want behind closed doors, but when it comes to standing up for their principles, they slither away. Ring of Fire’s Farron Cousins discusses this.

Good news folks. Donald Trump’s White House staffers and his aides, uh, pretty much agree according to a New York Times article that his attacks on representative Elijah Cummings are not good. They’re not smart overall. It’s really disgusting what Trump is doing according to a lot of people in the White House. Now, that’s the good news. The bad news is as always as I think I mentioned what maybe even a week ago, they’re not going to do anything about it. And that again is what annoys me about these articles that come out. Trump aides not happy about his attacks on Elijah Cummings. They privately balk at Cummings attacks according to CNN.

Who Cares? Seriously? What kinds of cowards are working in this White House? Could you imagine for a second, you as a person, you’ve got your set of morals, you’ve got your principles, and you go to work somewhere completely by choice, and then suddenly you find yourself day after day after day, having to put those morals and principles aside, having to do things or support a person that violates every one of your morals and every one of your principles. Everything you’ve ever stood for, everything you’ve ever been taught in your life about good and bad.

Yeah. You might whisper to the buddy next to you. I don’t like this at all. It was a bad, but you go along with it anyway. At that point, you’re in accomplice to this and that’s what I want these White House staffers to understand. Nobody cares if you’re speaking anonymously to the New York Times telling them, I think it’s bad. The president’s doing this, and then going right back to that meeting saying, yes sir, Mr. President. Sure. Yeah, absolutely. Whatever you say, this is great. People are eating it up. You’re getting so many retweets. What you told the New York Times at that point doesn’t matter.

You’re sitting there being a bootlicker for Donald Trump, acting like it’s not repulsive. Watching him do this day in and day out and at that point you haven’t just put your morals and principles aside. You’ve thrown them away because the more you stay exposed to this, the more you have to say, well, one more time. I’m going to ignore my gut one more time. I’m going to ignore my morals. And then you do it again and again and again. Pretty soon you’re going to find out that you don’t have morals anymore. You’ve pushed them aside, show far that you can’t remember what happened.

And that’s the evolution we’re going to see with these Trump staffers. You know, they can again talk bad about it behind his back. They can be anonymous sources for these newspapers saying, I really think it’s a bad idea. It’s a bad strategy. I wish you wouldn’t do it, but you’re going to keep forgetting who you are and what you originally sought to do with your life. And before you know it, you’re the next Donald Trump. You’re the next Karl Rove. You’re the next John Bolton up there. Forgetting that you even had principles and morals at one point in your life, just pushing the u s towards disastrous policy because it’s been very prosperous for you, for your entire career. That’s what’s going to happen with these Trump staffers. You want to look into your own future. Go look into Bolton’s eyes. Go look into Sean Hannity’s eyes. Look into Trump’s dead eyes because that is exactly what you’re becoming. The more you sit there and don’t call him on his nonsense racist tweets.