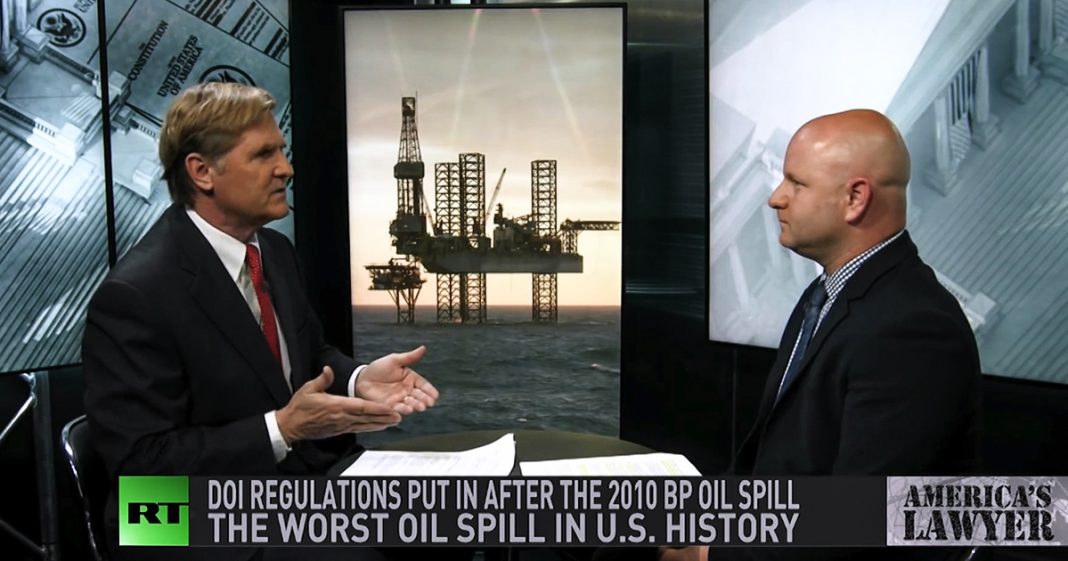 Via America’s Lawyer: The Department of Interior has rolled back protections that were put in place for offshore drilling operations after the Deepwater Horizon disaster. Mike Papantonio and Farron Cousins discuss.

Mike Papantonio:             The Department of Interior has rolled back protections that were put in place for offshore drilling operations after the Deepwater Horizon disaster. It sets us up for another disaster in the future, doesn’t it Farron? I mean there’s no, this isn’t even a close call. What they’ve done is everything that went wrong with the Deepwater Horizon right here along the Gulf Coast, all over destroyed ecosystems completely. Some of these ecosystems have not returned. They can’t return.

Farron Cousins:                  Right and, and in some instances, we also know back in the Deepwater Horizon days, they were filling out their safety inspections in pencil and then they would give them to the federal government who would then fill them back in with pen. The Deepwater Horizon obviously is an issue, you and I know way too much about almost.

You can go longer between inspections now and you have these oil industry groups, American Petroleum Institute out there heralding this as some kind of great win because apparently the regulations saying, hey, we need to make sure you don’t explode and kill people and destroy an ecosystem that was too cumbersome for these oil companies. And, and the API, they’re celebrating this as a, as if they just won the lottery because to them they did.

Mike Papantonio:             Yeah. Okay. So the argument is that Trump is trying to develop energy dominance, worldwide energy dominance. His idea is to say, and the, the industry of course is arguing, you know, Mr President, you can’t do that unless you let us do what we want to do. And that is to break whatever rule we want to break. To operate without any kind of oversight. To operate without any kind of regulatory involvement. That’s why if you do that, then we’re going to be okay. And the rest of the sentence is, and they, they, the, the American public never gets this. Just because they get the oil right off shore in the Gulf of Mexico doesn’t mean we get the oil.

Mike Papantonio:             They take the oil and they put it in these, they put it on these, these huge ships and they wait to see what’s happening with prices around the world. So if the yen is looking, they can sell more, you know, people that are dealing with yen, they go and sell it to the folks with the yen. And so the problem is the American public buys into that argument that, yeah, we’re solving the, the energy dominance issue and that’s going to be good for us. It doesn’t have anything to do with the price at the pump.

Farron Cousins:                  Right. You know, during the Obama years, domestic oil production reached an all time high, even more so than under George W. Bush. And so Trump has come along and his administration wants to increase that all time high. But at the same time, we could see for ourselves when we fill up our cars, gas prices are going up because that oil doesn’t stay here. You know, the Keystone pipeline that wasn’t going to give us energy. That was to ship it overseas.

Mike Papantonio:             Suppose to make these, just to make the industry make more money. Farron, thanks for joining me. We’ll be back with more stories next week.