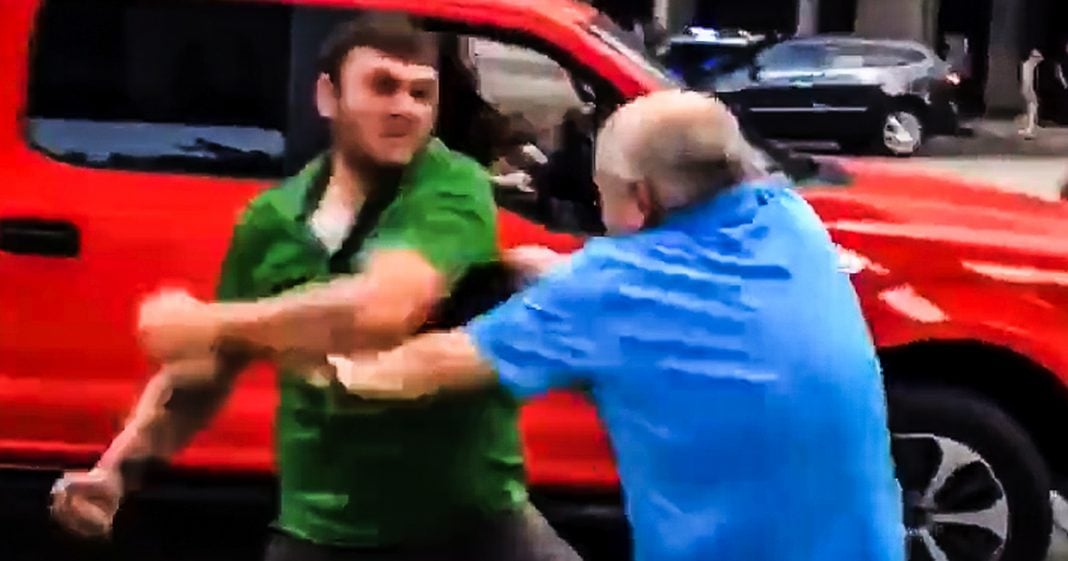 Donald Trump held another hate-fueled rally in Ohio last night, and tensions were high both inside and outside the arena. Video captured outside the event showed a Trump supporter viciously beating an older protester. While it isn’t completely clear what provoked the confrontation, this type of behavior has clearly been spurred on by Trump’s rhetoric. Ring of Fire’s Farron Cousins discusses this.

Last night, Donald Trump held another hate fueled rally in the city of Cincinnati, Ohio. And both inside and outside of the arena, things took a violent turn on the inside as clips that were going around. Social media showed there was one person who held up a sign that said America was built by immigrants. Other people became angry about that sign, pointing out a very real truth. And they took the sign, they tore it up, they kind of roughed up the person holding the sign. The video is not super a good on that, but there is one video that is very crystal clear that shows a person who is alleged to be a Trump supporter hopping out of his truck and beating the crap out of a protester. Here’s that clip.

So the man who jumps out of the truck and starts pummeling the older man there who is allegedly a protester, was immediately a snatched by the police. As you can see at the end of that video, you know, very easily they grabbed him, got him a, he’s now been booked. Uh, he’s charged with assault. But here’s the thing, everybody is going around. I witnessed this to this account, say that this man was in fact a Trump supporter, but so far as of me sitting down here, it has not necessarily been 100% confirmed. We have not had the puncher out there and say, yes, I am a Trump supporter. So just to clear that up, just in case anybody wants to say, hey, wasn’t a Trump supporter signs point to the fact that he was, but the other thing is we also don’t know what exactly prompted this altercation. Now, I witnessed this to this event, say that the man who got out of the truck had been driving around yelling things at other protesters as well.

If he sitting there yelling at the people who are protesting Trump, it is likely and probable that this man is in fact a Trump supporter. But what prompted this provocation here? You know, if we had more video, if we had video prior to the event, obviously we could get a little more context here. But here’s the thing. As I pointed out, it wasn’t just outside. There was also a scuffle inside. This is what happens if Donald Trump’s hate fueled rallies. People get energized, they get angry, and they feel empowered and they feel that they have the ability and authority to go out there and impose their own form of justice on people who disagree with Donald Trump and his policies. And that’s not how things work in this country.

Now, Republicans, this morning, rather than talking about this particular event, they’re out there sharing the story of a Trump supporter, huge swollen, bruised side of his face who claims he was assaulted for wearing a Make America Great Again hat. There’s no video of this event. Uh, we have no evidence other than this man’s word and obviously the bruises on his face, but let’s be perfectly honest, folks. Bruises can happen from anything that could’ve been a nasty fall down the stairs. There’s no hard evidence, but nonetheless, Republicans are pushing that to show that liberals are the crazy violent folks. Whereas we have this video here showing who the crazy violent folks really are, and conservatives like they always do, are going to completely ignore it. But I promise you that guy in the Manga hat, he is going to be all over Fox News before the end of the weekend.