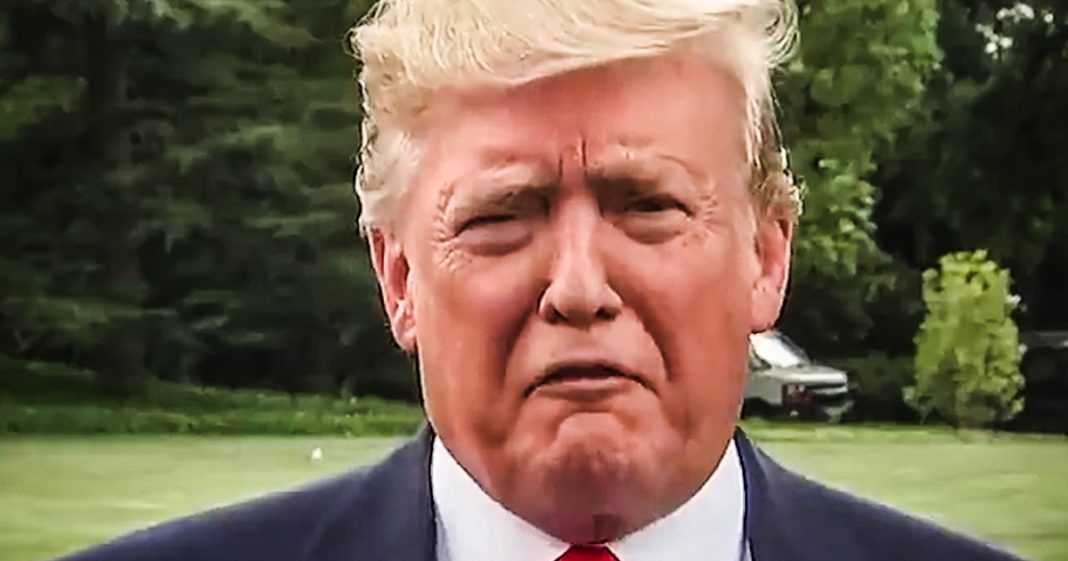 When reporters asked Trump about his phone call with Vladimir Putin and whether he brought up election interference, Trump began rambling on and on about wildfires in Russia. He did not bring up the issue with Putin, and he has made it clear that he doesn’t care about the security of our elections, and his reluctance to even talk about it is cause for great concern. Ring of Fire’s Farron Cousins discusses this.

Yesterday, reporters caught Donald Trump walking outside the White House and they asked him about a phone call he had earlier in the day with Vladimir Putin. They wanted to know, did you address with Putin the issue of election interference? You know, Robert Mueller just a week ago warned us that it happened, that it is going to happen, and to be honest, that it is currently happening. And by the way, it’s not just Russia, it’s lots of other people from around the world and right here in the United States interfering with our elections. So they just wanted to ask Trump, hey, straight up, he told us this was happening. Neo just a week ago told us in the original report, he told us in his press conference in May, did you talk to Putin about this? Because you know, it kind of originated over there in Russia in 2016 and this was Trump’s response.

Reporter:                      “Robert Mueller said last week that Russia is interfering with US elections right now. Did you discuss that with Vladimir Putin?”

Donald Trump:              “Okay. Okay. Fine. We talk about that. I spoke with President Putin of Russia yesterday. They are having massive fires in the, in their forests. They have tremendous, I’ve never seen anything like it. It’s very big. I just offered our assistance because we’re very good at putting out forest fires, frankly, and if they should need it, I offered our assistance. We had a good talk, short talk, but a good talk, and I think he appreciated it, so we would be able to help them. It’s a, these are massive fires, like I haven’t seen. That was the primary importance of the conversation and I think they, I think they very much appreciate it.”

Now, before we get into his not addressing the issue of election interference, it is worthwhile to point out the fact that yes, Russia right now in Siberia, uh, is experiencing massively horrible wildfires that as of this morning, have already burned roughly 15,000 square miles of forest. These smoke extends for hundreds of miles out from where the fires are occurring. It is choking cities. It is very, very bad in the US should go over there and help. But at the same time, Donald Trump completely deflected away from the question that was asked him. Nobody asked him about the Russian wildfires. I promise you the majority of people in this country don’t even know that it’s happening and most of them to be perfectly blunt, probably don’t even care. What they do care about though is are our elections secure in 2020 and the answer to that is no. And I want to make this point very clear.

It is not just Russia and Russia did not, you know, become the first area place people whatever, to interfere in our elections. Republicans have been interfering in our elections for a couple decades now with voter purges, with voter ID laws, with shoddy voting machines. Yeah, Republicans perfected election interference. It’s just that other countries out there now are taking it one step further with the misinformation and propaganda campaigns as well as the potential for hacking. And we know the hacking occurred in 2016 there is no hard evidence to suggest that voting totals were changed, but it’s also completely possible for someone, whether someone overseas or someone down the street from you to hack into these systems and actually change the vote totals. We are vulnerable. We need to do something about this. But Donald Trump would rather deflect from the question and have to say, oh no, no, no, no.

We didn’t talk about that. Did you know there’s fires out there? Russia’s on fire folks. And I offered to send some of our firefighters over there because you know we’re pretty good at fighting fires. Really? Trump, I’m surprised you didn’t tell him like you told the people of California to just go rake the forests. Right. Cause that’s what you told these people. You blamed them in California for their wildfires. Did you do the same for Russia or did you not want to talk bad about your best Buddy Vladimir Putin? I’m pretty sure it’s the ladder in this particular instance.